After three years, T.O.P has finally made his comeback with Doom Dada.

Similar to Coup D’etat and Ringa Linga, Doom Dada’s concept is slightly darker than we’re used to from K-Pop. But again, like Coup D’etat, there’s a lot of symbolism and hidden meanings in this MV. We’re then introduced to the apes, who are digging around when they find a giant microphone. The apes then start playing around with it to see what it can do. This is a strong reference to Stanley Kubrick’s 2001: A Space Odyssey. This film was described as the ‘Big Bang’ of it’s era due to the realistic special effects. At the start, there are apes who find a bone and start experimenting with it. It’s all done to show the evolution of the human race, but in T.O.P’s case as it’s a microphone, it’s showing the evolution of him as a rapper. There’s also the Zoe-trope inspired effect of him running with skeletons, and the shots of him leading the evolutionary line to show his evolution.

As well a the film reference, there’s also a lot to do with surrealist artist, Salvador Dali. In past interviews T.O.P has made it clear that he’s a fan of Dali’s work, and has even included it a lot in his MV.

First, there’s the child. Dali did a painting called Baby Map of the World, and all it is, is a giant baby’s head with countries and and axis through it. The painting symbolises that children are the future, and T.O.P is saying youth are the future of rap. Baby Map of the World

Next, there’s T.O.P’s upside down mustache, designed in the same way as Dali’s.

Then, there’s a few links to Dali’s quote, “Don’t do drugs, I am drugs” which has been shown through the hallucination  effects and the girl’s dilating pupils.

And lastly, is the atomic explosion. Dali painted The Three Sphinxes of Bikini which was based on the atomic bombs being dropped in Japan at the time. Dali often expressed his horror surrounding the A-bombs, and this was not his only work on the subject. 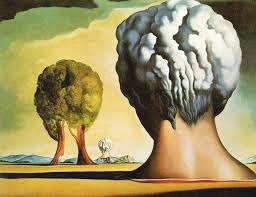 Along with the Dali references and the evolutionary side of it, there’s also the addition of designer furniture. Anyone who knows T.O.P will know he loves to collect designer furniture, and in this music video he’s featured furniture from Italian brand Capellini, amongst others.

At first the mv might seem incredibly strange, but when you look into it, it’s really well done and the comedy was worked in just right. The music video wasn’t serious enough to be like Coup D’etat but it wasn’t so crazy that it was like Gangnam Style either.

A special thanks to Lore Walsh for all the help!

Check it out below!