Marvel and KPOP fanatics, this one is for you! 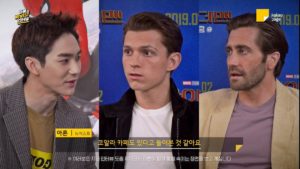 Nu’est’s own Aron was lucky enough to interview Tom Holland and Jake Gyllenhaal for their upcoming movie; ‘Spiderman Far From Home.’

As the two leading cast members continued to Korea on their press tour, Aron, originally from the U.S showed off his interviewing skills in English by chatting to the actors about the upcoming movie.

During the interview, Tom Holland was asked about the difference between ‘Spider-man’ and ‘Iron Man’, which is a poignant theme in the new blockbuster film. Aron asked Jake, however about the relationship that the characters Mysterio and Spiderman respectively have.

In the midst of chatting about the film, Aron and Jake started getting playful and tricked Tom Holland into believing there is such thing as a Koala cafe in Korea.

Jake shared his admiration for Koreas’ cafe culture and said that he even went to a sheep cafe and a cat cafe during his stay. To which Aron caught on and said, very seriously, that he thinks there is a Koala Cafe too.

You guys can watch Tom Holland’s adorable reaction to the prank, as well as the rest of the interview, below:

To round up, for those who may not know, Aron used to dream of becoming a journalist whilst he was still schooling, and his dream came true in this interview.

Currently, NU’EST is preparing for their ‘Segno Tour 2019’ and ‘Spiderman Far From Home’ is playing in theatres.

Who else is hoping that the Marvel and KPOP world collide more in the future? Maybe Aron will get a chance to interview more actors.