Trending
You are at:Home»Events»Concert»[NEWS] Blackpink release dates for their European Tour

After just two and a half years since their debut, Blackpink are already going on a world tour! The group has been incredibly successful worldwide and have recently been breaking records in Europe. And now the time has come – they have officially announced the dates for their “In Your Area” tour with KIA.

The group will be coming to these cities: 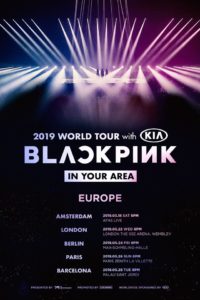