Trending
You are at:Home»Original Content»Editorials»[OP-ED] Why is sasaeng behaviour rampant in the Kpop industry?

[OP-ED] Why is sasaeng behaviour rampant in the Kpop industry?

‘Sasaengs’ – the Korean term for obsessive fans – have plagued the Kpop industry since its rise in popularity. From stalking to theft, harassment to attempted kidnapping, it seems that these so-called ‘fans’ will stop at nothing to interact with their favourite artists. Undeterred by the law, social condemnation or even the pleas from celebrities themselves, why is it that this behaviour is so prevalent within the Kpop industry?

Perhaps it could be attributed to the way Kpop encourages ‘stan’ culture for profit. From an idol’s debut, they are marketed to appeal solely to their fans. They are forbidden to date or have much of a personal life that isn’t broadcasted to the world. Their work lives eclipse their personal ones, allowing agencies to create an air of mystery surrounding their artists. Naturally, fans will want to know more about them and desire a sense of closeness to the idols who have impacted their lives. It’s this that agencies capitalise upon, sending artists to variety shows to build their public personas knowing that fans will promote them – increasing their reach – for free via social media. They allow their artist’s fans to believe that their support alone can propel their favourite groups/artists’ to success when they buy their merchandise, their concert tickets or passes to meet-and-greet events. 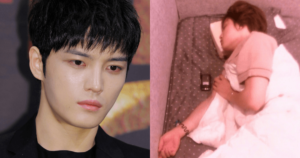 JYJ Jaejoong’s sasaeng broke into his sauna whilst he was sleeping, took this photo and then bragged about kissing him – a form of sexual harassment.

For sasaengs however, this marketing strategy morphs into an intense form of a ‘para-social’ relationship: one-sided relationships where one half is emotionally invested whilst the other is not. Some sasaengs crave recognition and attention from their favourite celebrities and will strive to gain it at any cost. Others feel entitled to their beloved idol’s time and attention because of this, feeling that the celebrity in question “owes” them for their success.

Sasaengs illegally obtain idol’s personal information such as their home address, daily schedules, flights, and phone numbers. They will go to extreme lengths to obtain it: many hack into email accounts and phones whilst others will take up jobs at airports or entertainment agencies to steal this information – an invasive and gross violation of privacy. 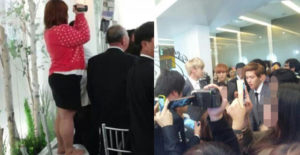 SM’s popular group EXO has been on the receiving end of some of the most extreme cases of sasaeng behaviour in Kpop history. A group of young, female sasaengs shaved their heads and dressed as men in order to enter the bathrooms the EXO members were using, whilst another went so far as to hire a van disguised as their security team’s and parked it outside of the member’s building that they were filming in. Former member Luhan nearly got into the vehicle before his security team stopped him, foiling an attempted kidnapping plot. Acts such as these have forced member Baekhyun to address the ongoing threats to his privacy. He’s previously said he “really hate[s]” sasaengs and pleaded with them to stop calling him, to no avail. What exactly will it take for sasaengs to stop, if even the obvious discomfort and anxiety they cause to idols doesn’t faze them?

Kpop stan culture has undeniably shifted into mainstream society in recent times. 2019 saw the Hallyu wave reach new heights as BTS and BLACKPINK broke into the Western music scene. Once seen as a sub-culture for impressionable teens, it’s now enjoyed by people of all ages and genders.

Could it be that sasaeng behaviour is cultivated within this newfound acceptance of stan culture? Of course, not all fans or ‘stans’ are sasaengs. But it could be argued that sasaengs experience a sense of belonging in these fanbases, and therefore believe that their behaviour is somewhat ‘acceptable’ when framed in the context of devotion toward an idol or idol group.

From a sociological perspective, youth-subcultural theory explains this phenomenon: young people seek out groups of like-minded people in order to achieve a sense of identity. When we apply this to sasaengs, their behaviour appears to be a warped and twisted manifestation of their desire to belong. This could explain why sasaengs have developed a network, where they validate each other and reinforce their determination to harass these celebrities. Those who elicit a personal response from respected celebrities gain more respect amongst sasaengs, creating a hierarchy similar to those seen in gangs.

There are probably a myriad of other reasons why sasaengs engage in such anti-social behaviours. Whatever they may be, it’s evident that sasaeng behaviour is something that needs to be removed from the Kpop industry, for the safety and wellbeing of artists, their agencies and fans alike.

If you witness sasaeng behaviour online, such as threats, targeted harassment or illegal releases of private information concerning idols, please report it to the relevant entertainment agencies/authorities.