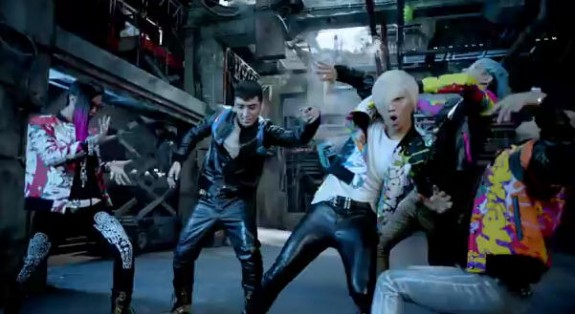 This week’s Kpop Music Video Breakdown is the YG Entertainment Edition and, thanks to your votes, BIG BANG are repeat offenders of the series, claiming victory in the Rookie Edition as well as this week’s! Four years on from La La La, the BIG BANG members certainly grew up a lot, now barely visible beneath muscles and colourful haircuts (though I can’t say Seungri’s dancing grew up with them, 3.40 – 3.50 in the far right…).

While the members have their own individual sets which seem completely unconnected, the video does have some fluidity thanks to the small storyline. Signs bearing messages such as “STOP MUSIC” held by masked guards, who are consequently being attacked by a large crowd of masked rebels ,suggest a situation in which music has been banned and the music lovers refuse to accept this. The lyrics, “Dance, ooh. I wanna dance dance dance da-dance,” reflect the story; they simply want to dance and they want the music. It actually makes sense, where as the individual sets just don’t.  While the rest of the lyrics stay along the dance/party lines, somehow I don’t see a defrosting Taeyang or chained up Daesung contributing to the party. But they look nice. The sets, I mean…

Speaking of Taeyang and Daesung, they seem to have their emotions mixed up during the video. While Daesung is chained to the wall, he doesn’t really struggle too much and proceeds to sing in a pretty calm fashion. Then there is Taeyang, who is incredibly angry in his meditating scene (Meditating! Relaxation, no?) and when there are sparks flying around him in some kind of industrial setting, he channels his anger towards the chain-link fencing and the camera, when he should have been getting the hell out of there before something blew up(!). As for the other members, G-Dragon looks pretty chilled throughout, T.O.P appears very charismatic and Seungri is looking seductive, surrounded by women who are just… rubbing him.

It isn’t long before the rebels have won! Hoorah! After pushing down the chain-link fence (not Taeyang’s this time) and rampaging across it, over to the ‘other side’, they begin a full blown dance party with BIG BANG. We never see what happened to those guards… Making use of the dynamics of the track at this point, the members show off two ‘slow motion’ clips where they appear to be being knocked over by the force wielded by Taeyang and then G-Dragon. It’s fun and impressive and it’s the first scene where all the members are together. All inhibitions are lost now as the party continues made up of the (still) masked rebels, the BIG BANG members and the dancing animal… things. Despite the fact that in some aspects it’s still quite random, this scene probably makes the most sense of them all, sticking close to the lyrics and inviting everyone to dance together. It’s pretty fantastic, baby! (…Even with Seungri’s dancing included.)

Check out the music video for Fantastic Baby below!

Vote here for the video you’d like to see for next week’s breakdown, the SM Entertainment Edition!