Trending
You are at:Home»News»Interviews»[Kpop Creators] Exclusive Interview with Mari Kim

With the return of our K-pop Creators feature, we also bring interviews with the masterminds behind your favourite k-pop acts. From choreographers to directors, these are the people who work behind the scenes to make k-pop what it is today.

We’ve been talking to Mari Kim, a Korean artist who’s work you might recognise from 2NE1‘s 2nd Mini Album cover and Hate You M/V. After studying Creative Media and Animation in Australia, Mari Kim returned to Seoul to become an artist and director, where she soon became well known for her unique cartoon characters – now referred to as Eyedolls. Her use of bright colours, big detailed eyes, vacant expressions and symbolic items within her art have become instantly recognisable, amongst both critics and k-pop fans!

The Eyedoll term derives from the big eyes that feature in each of her pieces, each with a detailed kaleidoscope style pattern within them. Mari Kim merges Japanese and Western culture together by highlighting iconic figures and fairy tales in a style which could be compared to Japanese anime, she confronts South Korea’s beauty standards through her work, and sometimes works a dark twist into her art – giving characters cuts and bruises. Whilst working on her own animation projects, Mari Kim has also been holding exhibitions in places like Asia, USA and more recently, London! (More info here). It was at one of her exhibitions where she was noticed and approached by YG CEO – Yang Hyun Suk. This marks the beginning of their collaboration, which resulted in 2NE1’s iconic Hate You music video.

The video was directed by Mari Kim herself, with little restrictions set by the company. She worked hard to bring out the charms of each member, whilst creating an engaging storyline for the viewers. Many Blackjack’s have been complimenting her on her accuracy of Park Bom‘s character – look out for the corn scene!
Along with this, she also took part in the teaser videos for 2NE1’s releases on their 2nd Mini Album, along with the album artwork. She reveals in previous interviews how she chose to make 21 different art pieces to match their name (2NE1). At what age did you decide that art is what you want to do, and are there any artists who inspired you?

“I don’t remember when I started my drawing and painting. Since I was young, I have always liked to draw and paint. Although I’m a fine artist, my background isn’t fine art. I am inspired by artists such as Cindy Sherman, Damian Hirst and and Murakami Takashi etc.”

Out of all the countries to study in, why did you choose Australia, and why did you decide to take multimedia and animation?

“Back then, I thought that Australia was the last heaven left on this Earth, and I still stand by that. I wanted to start doing something creative as I didn’t know that I will become a fine artist, but I think that I made a good choice. Taking this course has given me the inspiration to become a unique artist.”

For anyone who’s unfamiliar with your work, how would you describe it using only three words?

How does your work reflect you as a person?

“I use my memories, knowledge and my imagination to create my art work, it has to be all about me. Also, a lot of people have said that I look like my work too.”

At first glance, your work can seem quite colourful and lively, but looking closer, each piece has a darker theme behind it. Could you explain this in more detail?

“The image of evil kids in mass media has always been of interest to me.

I’ve also touched on some disturbing topics. My paper title was ‘Twisted Innocence – Enfant Terrible’ in my master course. My study was about how evil kids appeared in modern culture and media. I found out that a lot of evil children started to appear in 1980’s movies since the ‘The Exorcist’ was released. I still love horror films; especially if there is an evil kid in it. In my opinion, everything that has a conflicted taste is more attractive than just having one taste.”

What was your inspiration to begin making the “Eyedoll” style of character?

“When I was young, I never learned how to draw or paint so my drawings were based on the comic books that I had read. That’s how I came up with the EYEDOLL characters.”

I’ve noticed that eyes play a big role in your work – both still and animated. When looked at in detail, the eyes of your characters reveal an almost kaleidoscope-like pattern. What inspires you to devote so much attention to the eyes in particular?

“Eyes are the windows to the heart. I think that eyes will reflect how you feel, even if you try to hide it. Eyes are the worm hole that connects the outside world to inside world.”

“Big eyes may be following the beauty standard, but not necessarily the round shaped face. I strongly disagree with the archetypal idea of beauty in Korea. Everyone is beautiful in their own way.”

I’ve noticed that you’ve focused on adapting a lot of feminist figures – amongst other famous faces as Eyedoll characters, leading many to believe that you’re also a supporter of feminism. What are your views on it?

Moving on to 2NE1’s promotional pictures and music video – this hasn’t been your first animation project, so how does working for a big company like YG differ from making something on your own?

“I have not had much pressure or limitations with this project. YG gave me 100% freedom to do anything I want. I did however,  need to meet the deadline, but I have worked with many professionals so it wasn’t a big problem at all.”

“What did you know about 2NE1 prior to working for them?”

“I knew that they were four cool girls, with cool fashion and good music.”

What was the creative process that you took in order to complete this project?

“I have had a lot of fun creating their outfits. I worked closely with their stylist Yang.”

Upon seeing themselves as Eyedoll characters, what were 2NE1 member’s reactions?

“2NE1 loved what they became in the music video for ‘Hate You’ that I directed. I made them into action heroines in that MV.”

After the release of 2NE1’s album artworks and the music video, what was the general feedback you received from the public regarding your art style?

“The public liked the MV. I think some of them are quite shocked because it was created in a cartoon style.”

How did your professional life change after completing this project?

“It didn’t really change, but I have gained a lot of followers (2NE1 fans) on my SNS.”

You’ve recently held your Synchronicity show in London, is this the first time holding an exhibition in the UK? If so, how do you feel it went?

“I have participated in a show in 2013 too at the same gallery in London. I think it was great. This time around, I met a lot of new people and fans.”

Do you have any more plans to visit the UK?

“I will have new shows in London, but first, I have other shows coming up in China, NY and Korea.”

Which of her artworks is your favourite and why? Check out some of her works below! 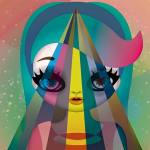 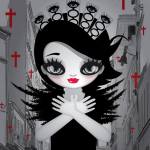 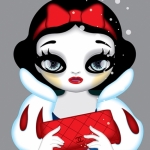 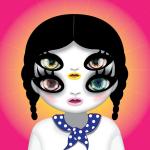 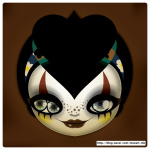 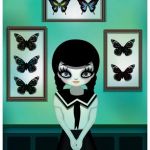 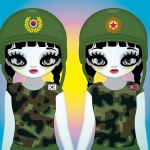 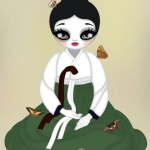 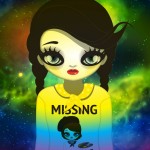 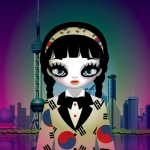