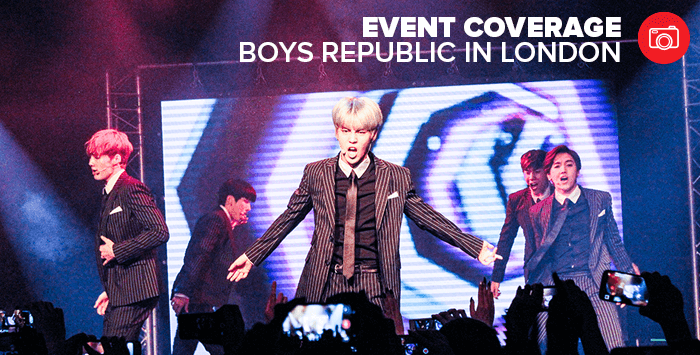 This weekend past, Boys Republic made their way to London as part of their European tour, the first K-pop concert to be held in London since UKISS back in September 2014, and they did not disappoint.

Many K-pop fans in the UK were wary, and perhaps rightfully so, of whether or not Boys Republic would deliver. Though the group are on the rise, previous concerts such as Teen Top in London have proven that your popularity in Korea does not necessarily always translate over to the UK. But the fans that decided not to attend, most definitely missed out. Boys Republic delivered the goods and then some, putting on a truly impressive performance that left us wondering how they weren’t yet more popular, in the UK and otherwise.

We arrived at the venue at around 2pm, fairly early but a modest queue of Boys Republic fans were already waiting. About an hour later, 2 members of Boys Republic and 3 staff members walked straight past that same queue of fans without being noticed. Not once, but twice! But the fans that missed them would need not worry, as they’d receive more than enough fan-service during the concert to make up for it. The group members also appeared again before the concert to say hello to their fans.

The concert began at around 8pm, with the boys bursting onto the stage to perform their first song. Huge cheers and several songs later, Boys Republic announced it was time for a special fan event. 4 lucky fans were invited onto the stage to play a game in which they had to act out different hints and figure out what the song was. Unfortunately for the 3 girls on Team 1, Boys Republic declared the other team the winners, as the audience had given them a helping hand! But in the end, they were all winners as they each received a Boys Republic folder and a hug from each member. After the fans left the stage, Boys Republic announced it was time for pianist Choi Soo Min to take to the stage and corralled the audience into cheering ‘Soo Min Oppa‘ as the staff set up his stage. At first it seemed a little odd for a pianist to perform at a K-pop gig, but Choi Soo Min’s undeniable talent soon washed any feelings of doubt away. Nevertheless though, it was still an intriguing sight to see a crowd of mostly young teenage girls cheering on classical music! Choi Soo Min performed around 4 songs, and exited the stage to a chorus of cheers and Boys Republic made their return to the stage to perform the rest of their set.

A few more performances later, and sadly the show had come to an end. But of course, the audience was treated to an encore before the boys departed for good. Some personal highlights from the show were the members solo and duet performances – particularly the incredible rap mash up of Uptown Funk! Boys Republic’s efforts to include as many British artists as possible did not go unappreciated either, as they did a fantastic cover of Robbie William’s Angel and a heart rending edition of Sam Smith’s Lay Me Down.

If you ever have the chance to see Boys Republic in concert – we highly recommend it! The boys talent and infectious energy will certainly make you a fan if you aren’t one already.

Check out the rest of our photos from the concert on Facebook.