Trending
You are at:Home»Events»Concert»[COVERAGE] PLT in London

As the sun went down on Sunday 17th February 2018, the crowds outside ULU Live in London chanted Villain’s ‘Manitto’ in anticipation. The chorus of “I think of you” set the mood for the night perfectly; the crowd’s enthusiasm for the artists they were about to see was palpable. Even as they filtered into the concert hall, the singing didn’t stop – it just got louder. The intense passion that radiated from the crowd bounced off the walls and penetrated every soul in the building. Even a security guard joked with the audience when he climbed onto the stage and received a raucous cheer. The energy of the crowd didn’t falter from the second the stage dimmed before revealing its first artist, to when it blackened after its last song.

This was the last concert of the WE GO HOLIC European tour that was organised by MyMusicTaste. It showcased the artists of Planetarium Records (June, Gaho, Villain, Jinwoo, Moti) who have come together to release under the name PLT. Kei.G is also a member of PLT but was not present at the concert. PLT started releasing music in 2018 but some of the artists have been releasing solo music since 2016.

The concert began as a purple light flooded the stage and June stepped onto the stage. He opened with the relaxing and slow ‘The Way You Make Me Feel Inside’. Despite the aura of calm that June’s silky vocals had summoned, it was all shattered as soon as he stopped singing and cheers ripped through the audience. The singer was immediately bombarded by audience members calling out to him. He responded gracefully with a “thank you” after someone shouted “we love you”, but struggled to contain a giggle as someone bellowed “you so spicy” across the crowd.

The audience’s involvement in the concert continued with Gaho, who had designed his performance of ‘Shine on you’, a duet with Villain, to include the audience – and the audience joined in with incredible energy. The audience quieted a bit to soak up the rich tone of his voice during the performance of his debut song ‘Stay With Me’. It was the final song of his solo set and the perfect climax; his high notes cut clearly through the room and the fans swayed as they revelled in the deep emotion of the ballad.

Next up was Jung Jinwoo, who appeared on stage decked out in black and a fur coat. He chuckled through the start of his first song due to some fans excitement as they screamed his name. He allowed the crowd to focus on his flawless, crystalline voice with two slower songs. The staging of him with his microphone was stripped back and focussed the audience on the sentiments of his music and his vocals. He switched this up when the melodic guitar riff of his final song began, and he performed the upbeat ‘She’s Got Everything’.

Rapper Moti upped the tempo of the concert with his loud and hard-hitting beats. In opposition to the labelmates who performed before him, Moti dashed around the stage during his performance making sure to get close to every fan he could. He stepped over the speakers at the front of the stage and leant into the crowd to bridge the gap between the audience and himself. During the rapper’s speech, he told the audience about his mantra ‘work hard stay humble’ that gave him the name for his most recent album ‘WHSH’ and proceeded to show his hard work in his rap. 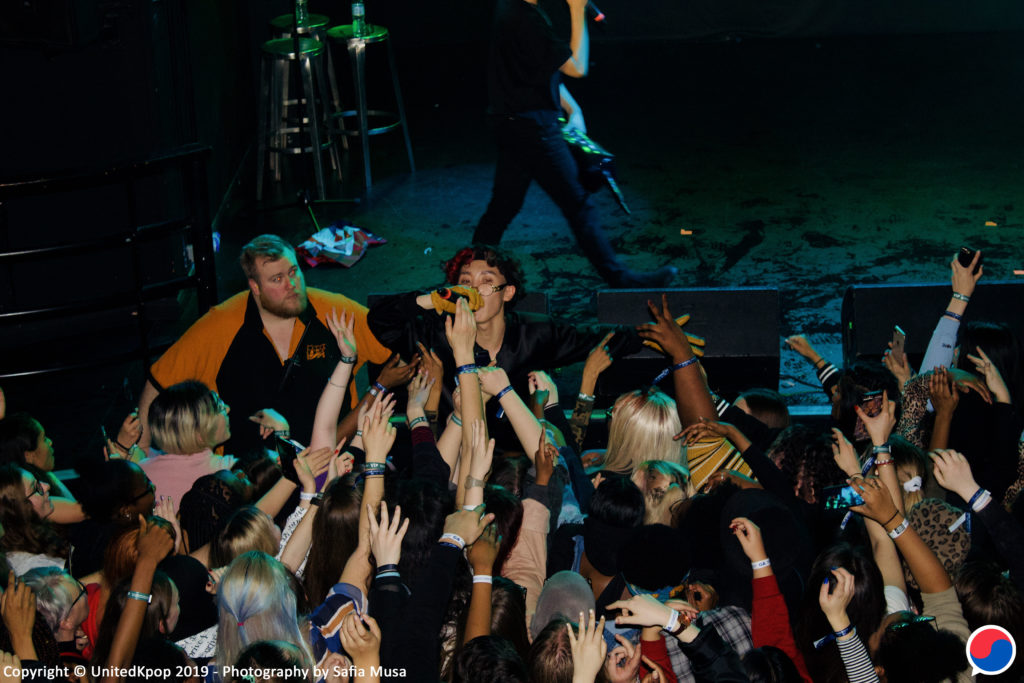 As the best English speaker and the youngest member of the group, Villain was bound to make a big impression. One of the most poignant being that he likes to swear, as he constantly adorned the audience with compliments that they were “fucking lit” and “fucking hot”. The singer also made a passionate speech about the racism he experienced while he lived in Dubai. He said that “when someone gives you a fuck you, you gotta shake it up with the love of Jesus and send it right back”. He then went on to perform ‘Manitto’: an anthem about his feelings on haters. It was obvious how influential this song has been for the audience with how fervently they sang along. Villain finished his set by performing his song ‘Luhvin It’, during which he jumped down into the crowd and performed with his fans surrounding him.

After Villain’s set, the artists started coming back out to perform songs that they had released together like Jinwoo and Gaho’s ‘Insomniac’ and Moti and Villain’s ‘Free the Mind’. This sequence kept the mood of the show and built anticipation for when they would all perform together.

When the group came out to perform their hits such as ‘Blah’, the audience went wild with screams. The music bubbled out of the members as they moved around the stage and poured their energy into the songs. Gaho and Villain danced around the stage; Gaho twirling, Villain dabbing. They were all still determined to involve the crowd and started picking out fan’s phones to video themselves with.

The crowd was still so lively by the end of this final section that they performed ‘Hocus Pocus’ and most recent single ‘Igoholic’ for a second time. 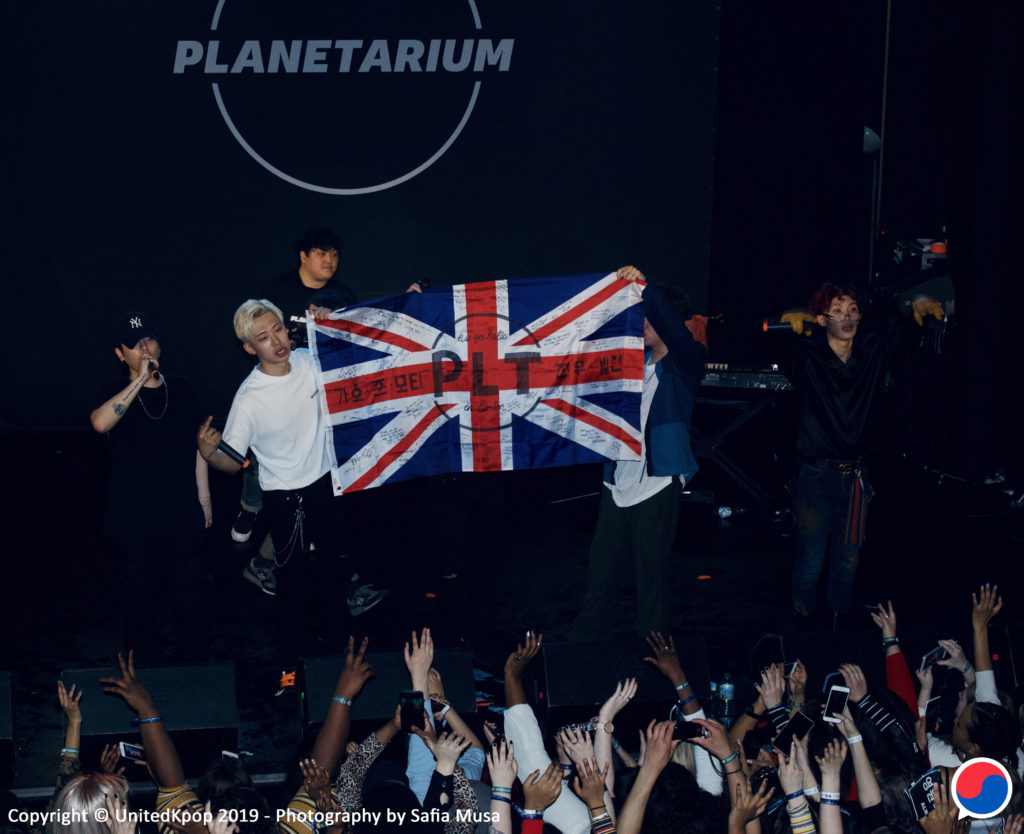 As the concert ended, before taking pictures with the audience and thanking their fans and team for support, the group held up a Union flag with ‘PLT’ in bold across it to the audience. For the last time, the audience cheered as Villain told them once again that they were “fucking beautiful”.