Trending
You are at:Home»Events»Concert»[COVERAGE] ATEEZ in London

The cold chill I had from the drizzling rain outside melted as soon as I stepped into the O2 Forum in Kentish Town. The place was packed and the heat from the crowd consumed the fresh air. The venue, which has a capacity of 2300, was overflowing with fans armed with circular lightsticks that bore the name ‘ATEEZ’.

It was the first concert of ATEEZ’s Europe tour. 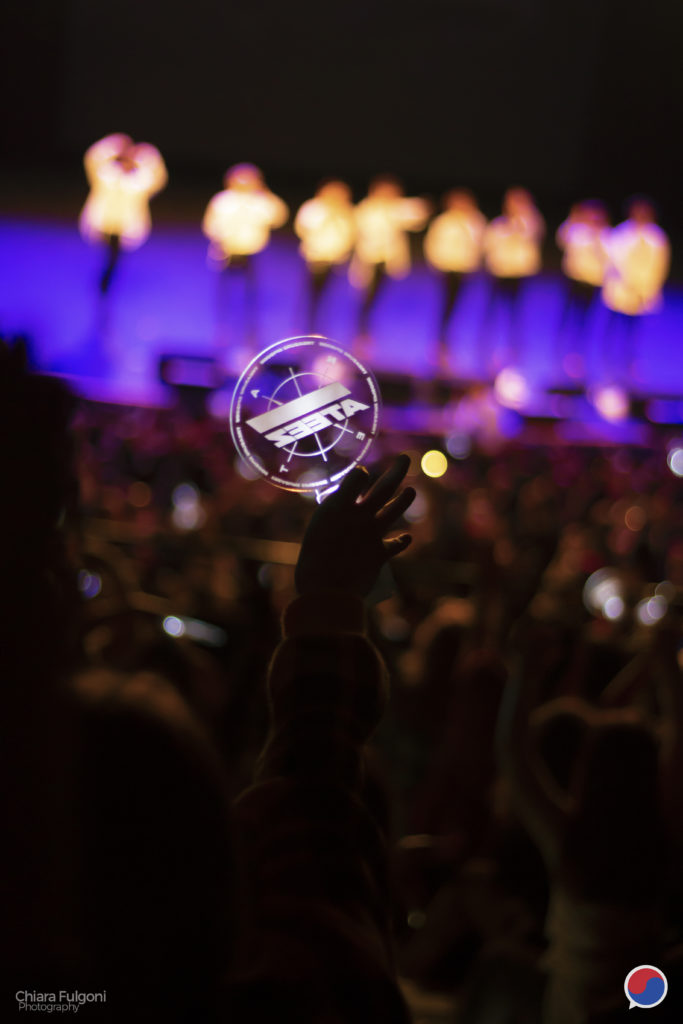 At the front of the venue, just metres away from the lit stage, a row of fans stood, squashed against the barriers. Some of the fans had been camping out since the day before to get a place at the front of the crowd. Others held banners they made for their biases – little did they know that the members would be taking some of those banners home. The excitement from the crowd was tangible as they chanted “ATEEZ” and airdropped each other kpop memes.

One girl at the front summed up the sentiment of the entire audience: “I’m squished, but it’ll be worth it.”

ATEEZ is an eight-member boygroup who debuted only a few months ago in October. The group already had a substantial following, especially considering their still rookies. It is this incredible fanbase that have given ATEEZ the opportunity to tour around the USA and Europe by requesting them through MyMusicTaste. ATEEZ had already visited fans in their sold-out tour in America and are going to visit nine more cities in Europe. It’s clear that ATEEZ have won the hearts of fans across the globe and their performance showed every reason why. 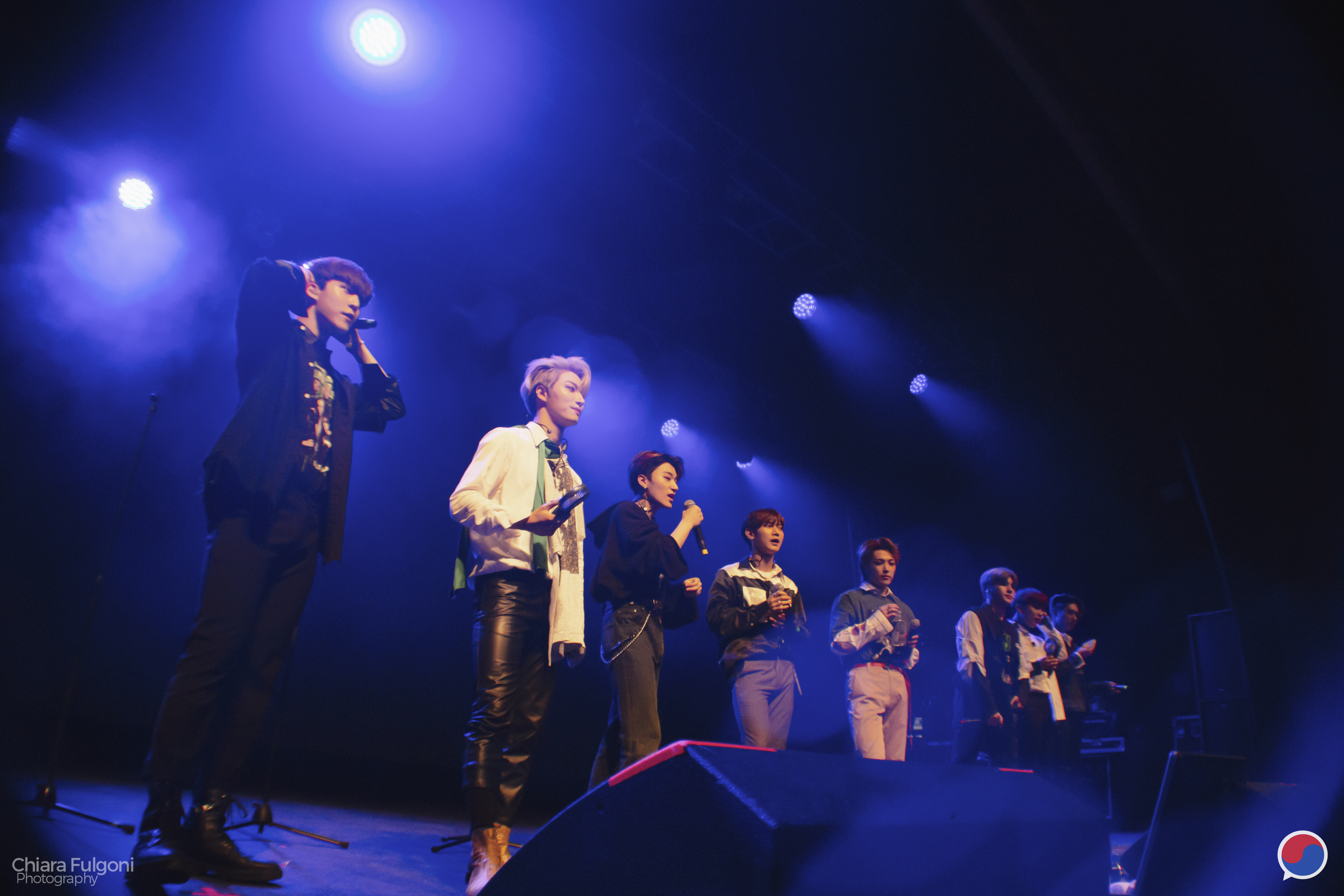 The crowd erupted in cheers and screams, as the group stepped onto the stage to start the concert with their debut song ‘Pirate King’. The hit song was the perfect opener: fans sang along to the iconic line “Will you be my friend?” and watched in awe as ATEEZ executed their impeccable dance routine. The power of their moves matched the energy of the heavy bass that reverberated from the speakers. 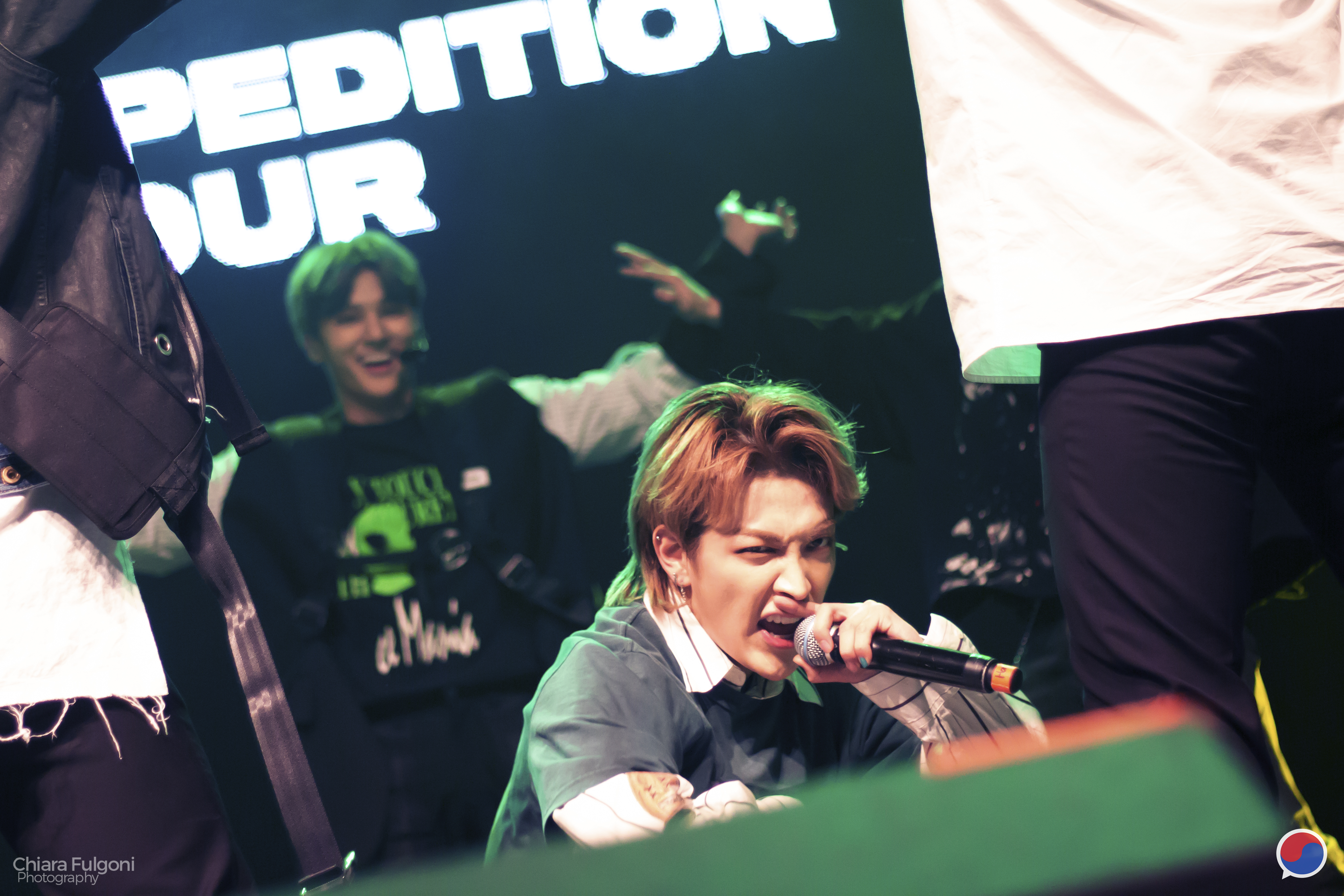 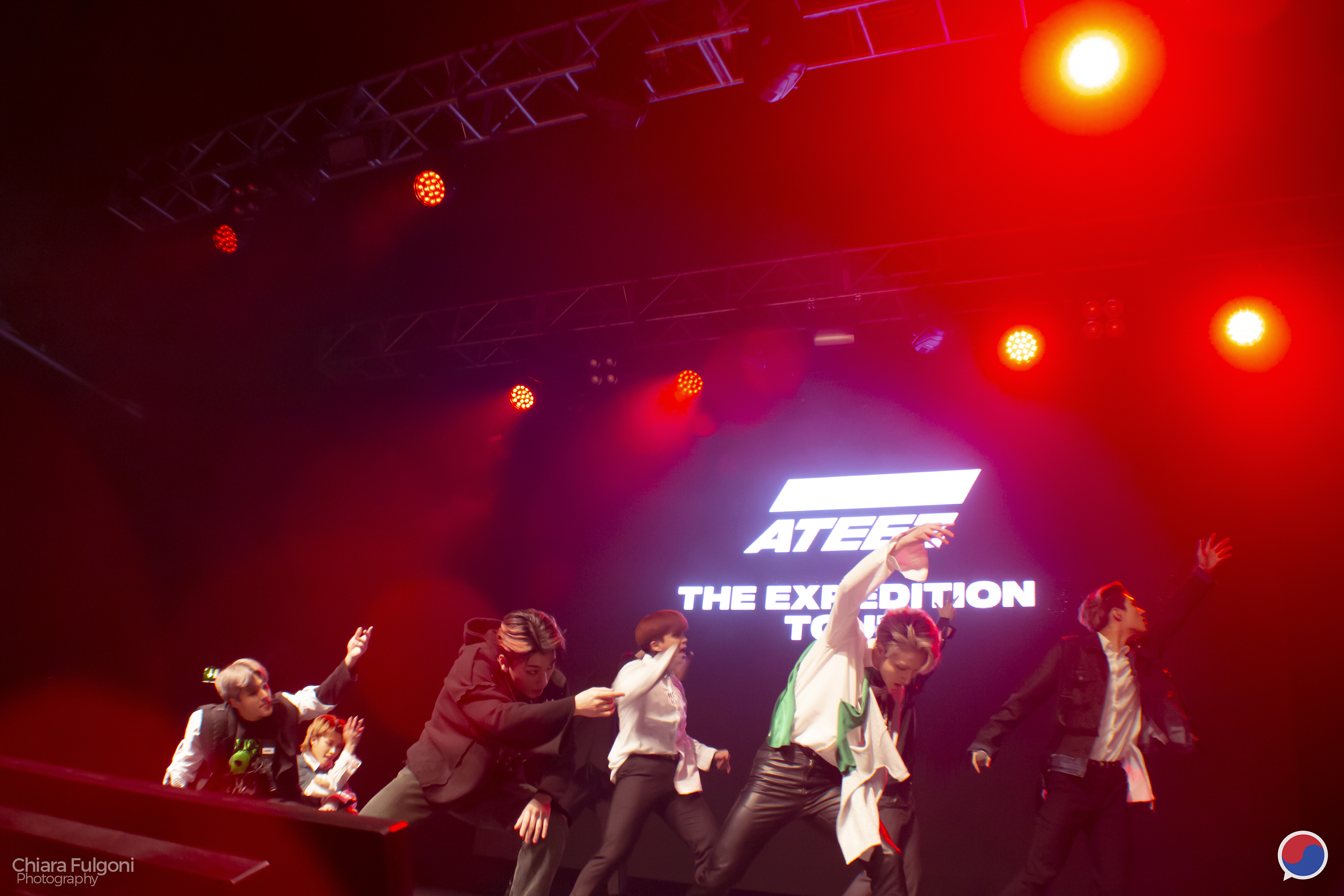 The song ended and the group readied themselves to do their introduction – dabbing their sweat with towels and, in Jongho’s case, cooling themselves with handheld fans. The group chorused their signature greeting and began introducing themselves. It was lucky that the fans were already aware of who they are, since you could barely hear their introductions above the cries from the audience. Wooyoung hadn’t even uttered a word of his greeting before he was met with shrieks.

The members had nothing but good things to say about England and their English fans. They consistently tried to express their love for the country in English, which resulted in Hongjoong adorably stating that the UK is a “lovely city” before quickly correcting himself. 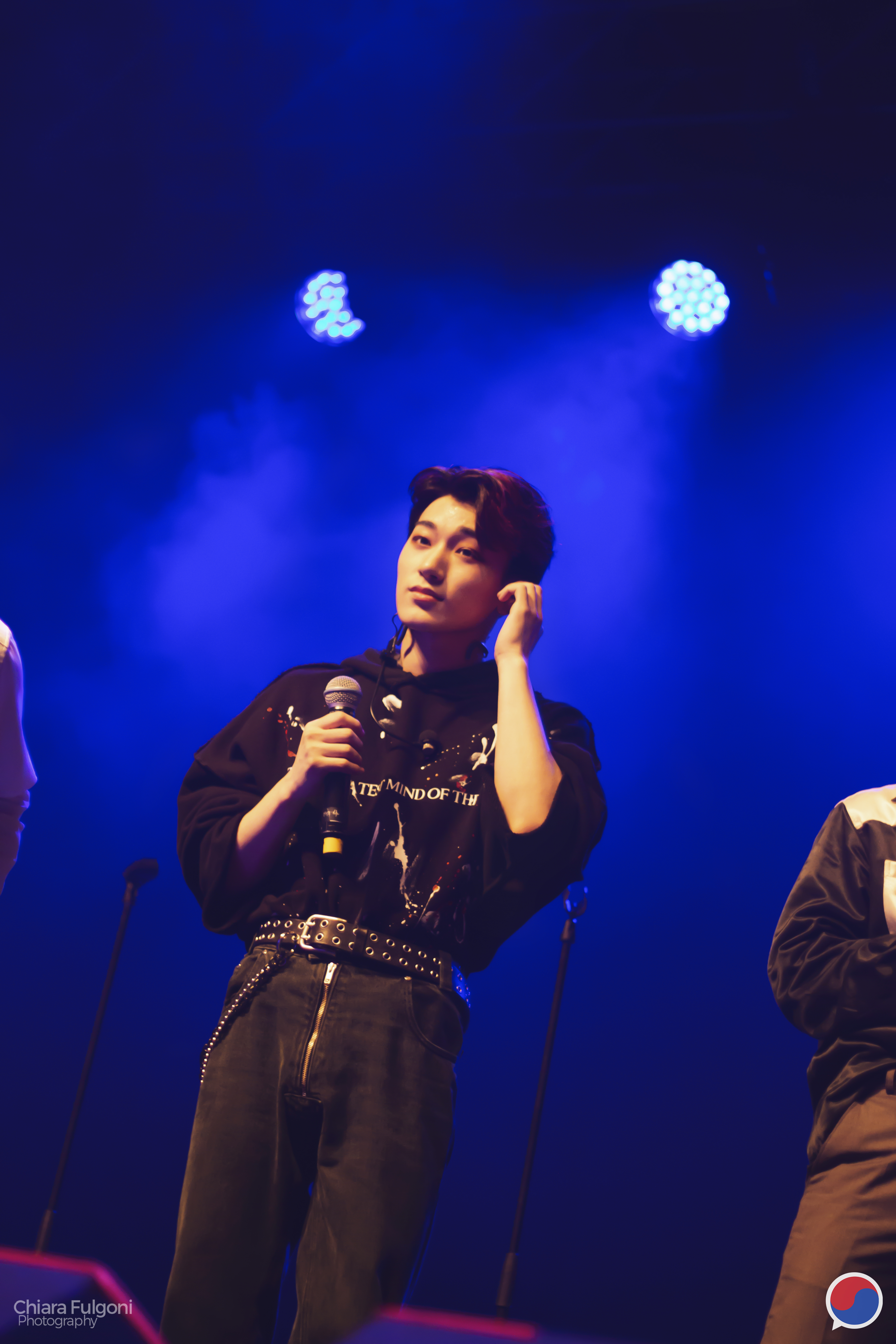 After their introduction, ATEEZ dragged standing microphones on stage to perform ‘Light’. The slower song paired with the simple stage set-up allowed ATEEZ to show their charm and their talent. The mellow music showcased their smooth, silvery voices. The minimalistic and natural performance revealed the groups bond as the members played around and serenaded each other. 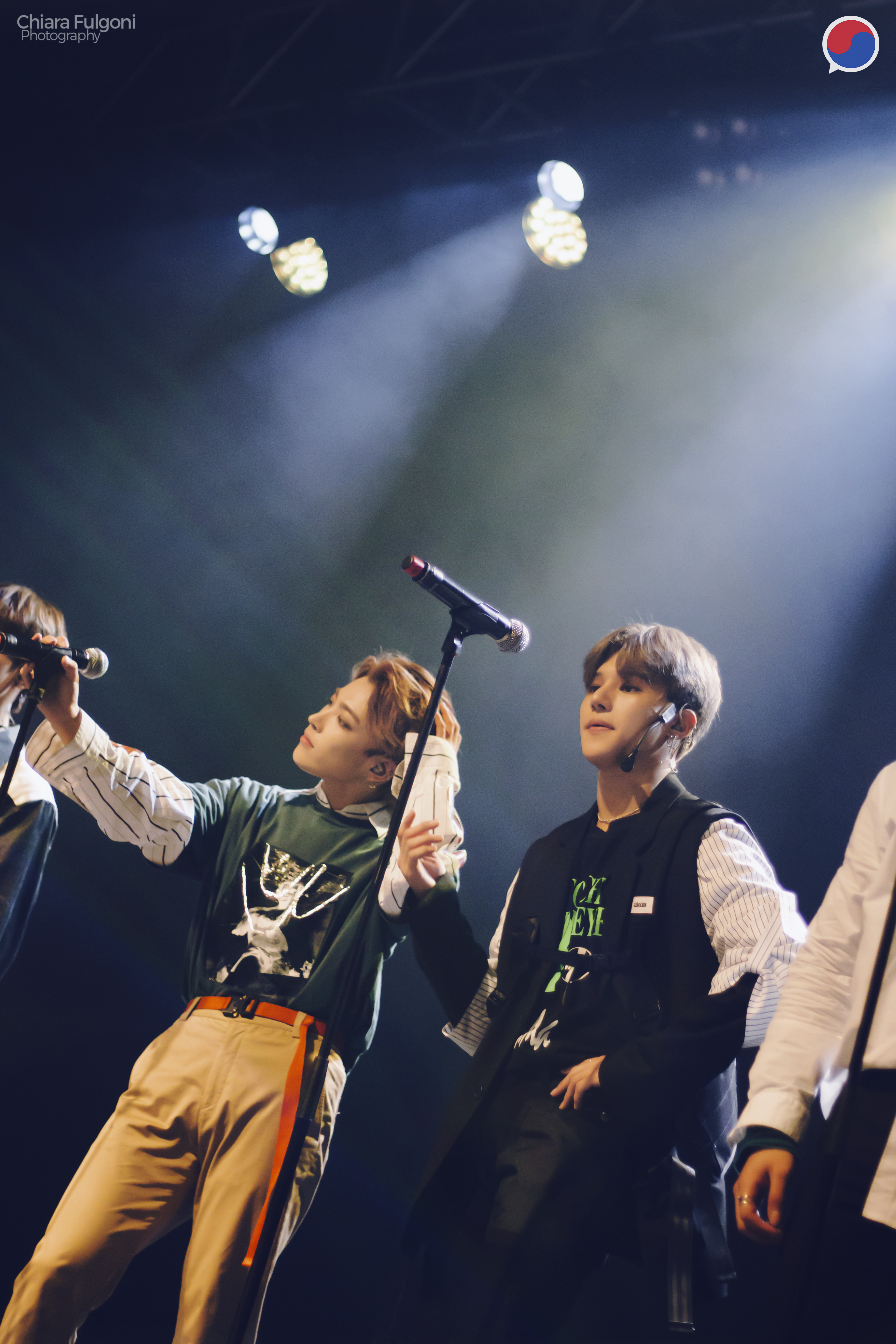 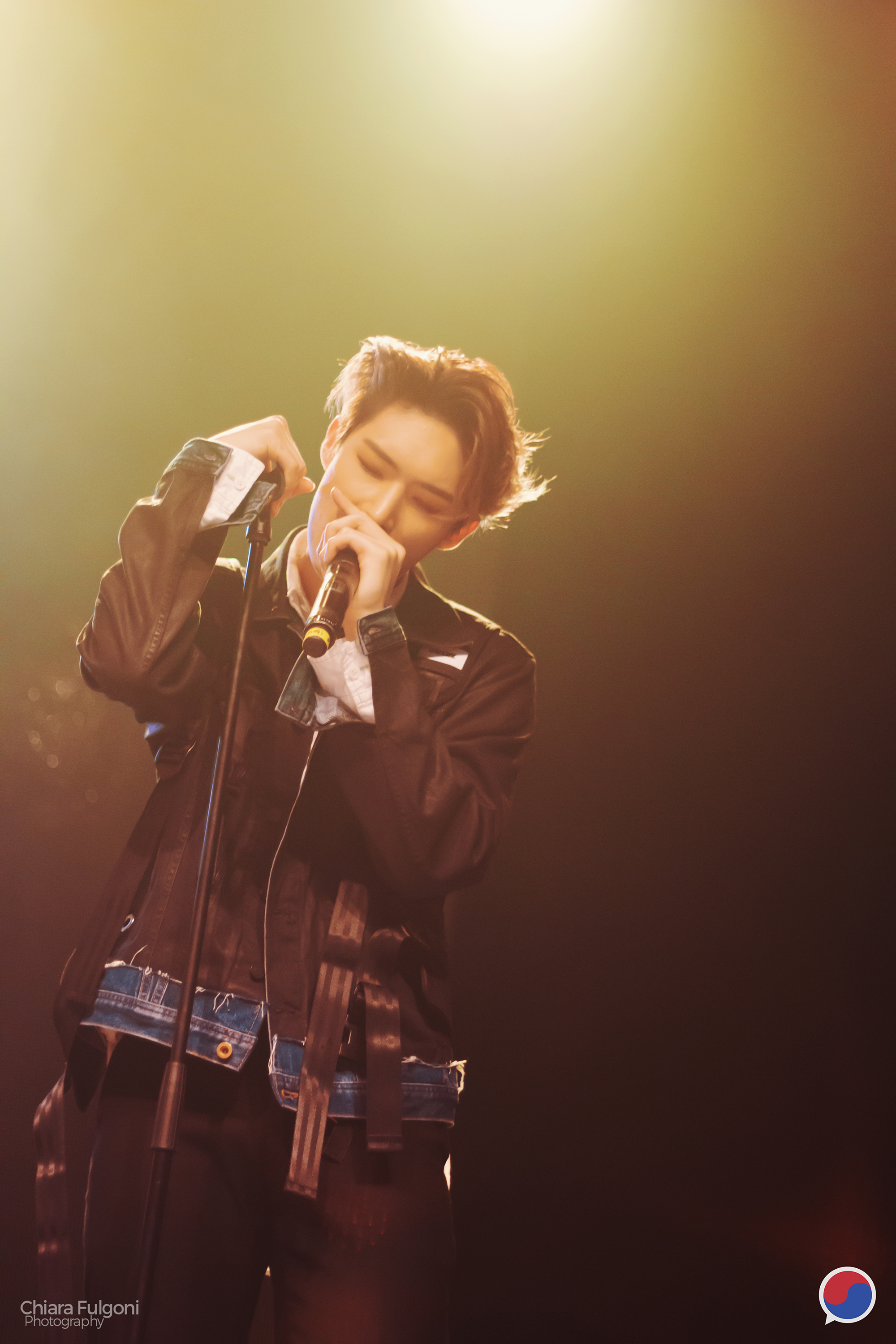 The group told the audience that they’d all wanted to visit the UK for a long time. Mingi said that he’d wanted to come to the UK because he’s a huge fan of Chelsea’s football team. It was clear throughout the concert how special it was for them to be able to perform in London and how much it meant to them. The whole group repeatedly confessed their love for the fans – shouting “I love ATINY!”

ATEEZ not only presented their singing talents, but also demonstrated their spotless dancing abilities during their ‘Special Stage’. Before their debut as ATEEZ, the group promoted under the name KQ Fellaz and released multiple cover dances to tease their debut. The training they received made them into astonishingly skilled dancers – their dancing is precise, artistic and mesmerising. Every move they made commanded attention and kept the audience captivated through a medley of songs. 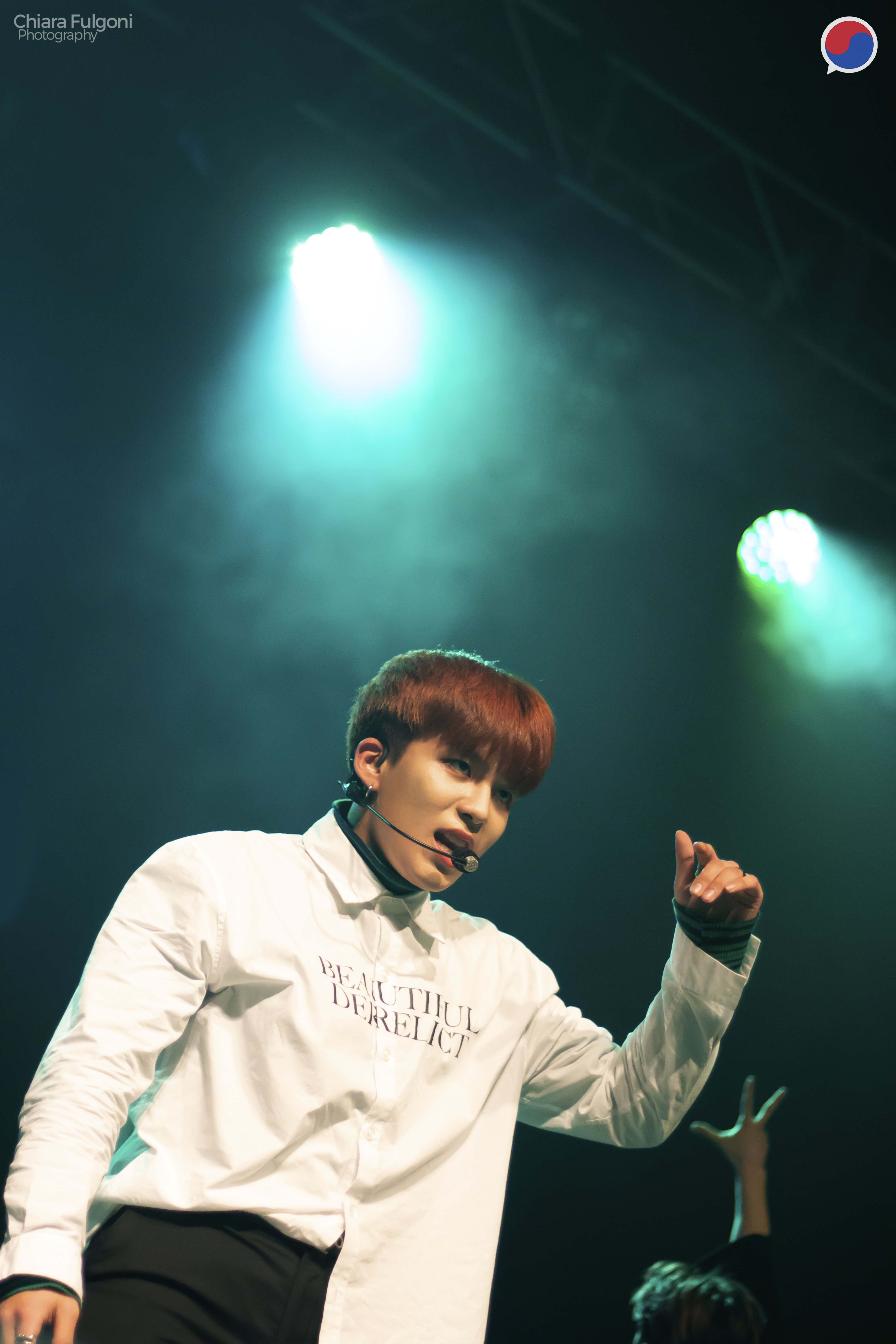 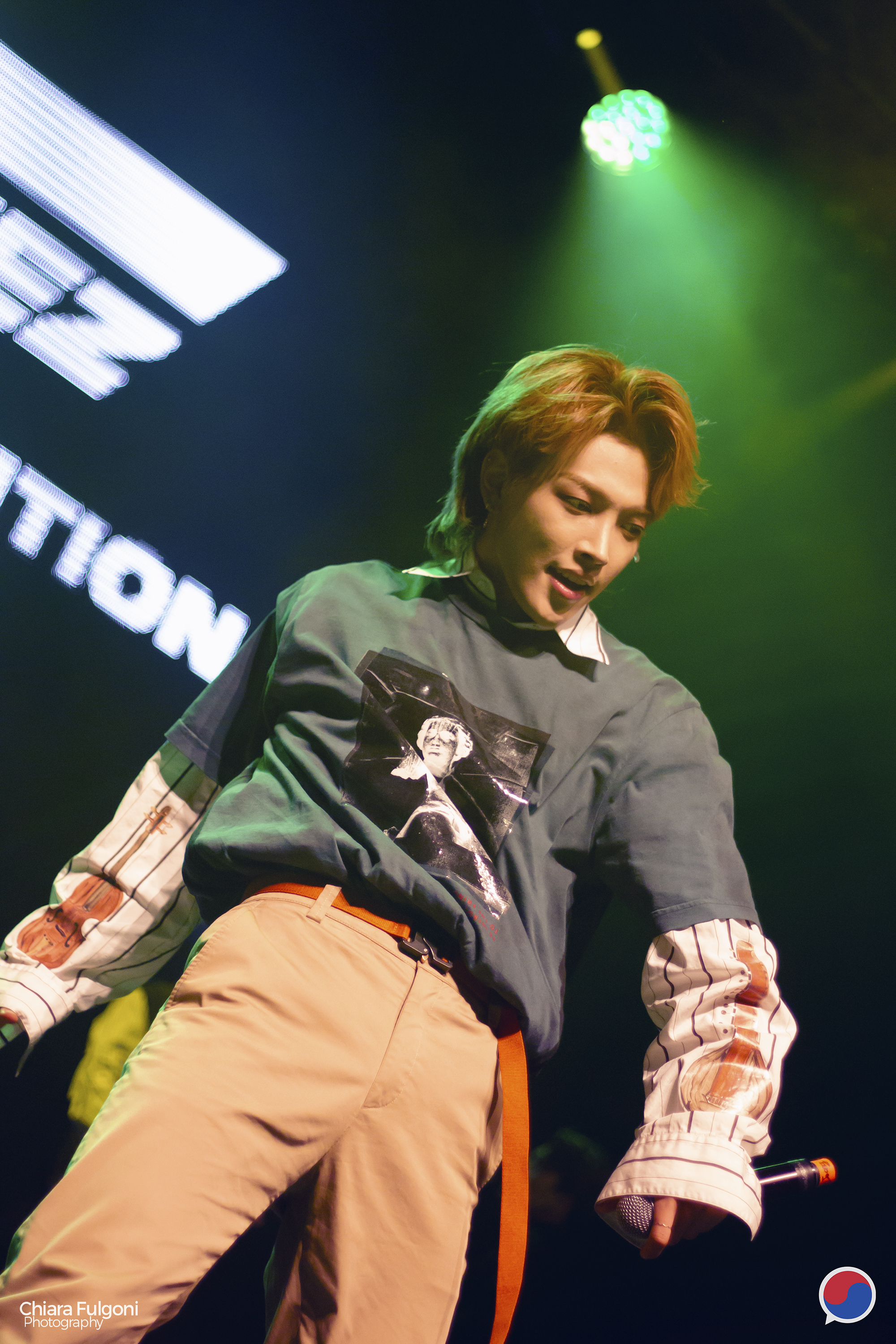 The group decided it would be fun to have a questions section in the middle of the show and had asked for questions from the audience online before the concert. This section lead to great amusement as the members performed acts such as lifting their leader Hongjoong into the air (with him waving like a king) and the members battling it out to see who is the most flexible by perfoming stylised versions of their kick dance move from ‘Say My Name’. The group even took part in a ‘Random Play Dance’ as it was so highly requested by fans.

One of the most touching moments of the question section was when they were asked to perform a song they are currently into: Wooyoung stated he was loving ‘Thinking Out Loud’ by Ed Sheeran and asked the audience to sing with him. Wooyoung and the thousands of fans that had filled the venue started singing the song together. The ethereal white light from the lightsticks in the crowd swayed from side to side. The heart-warming moment didn’t stop the rest of the group from playing about, however, as they attempted to harmonise and imitated their bandmate. 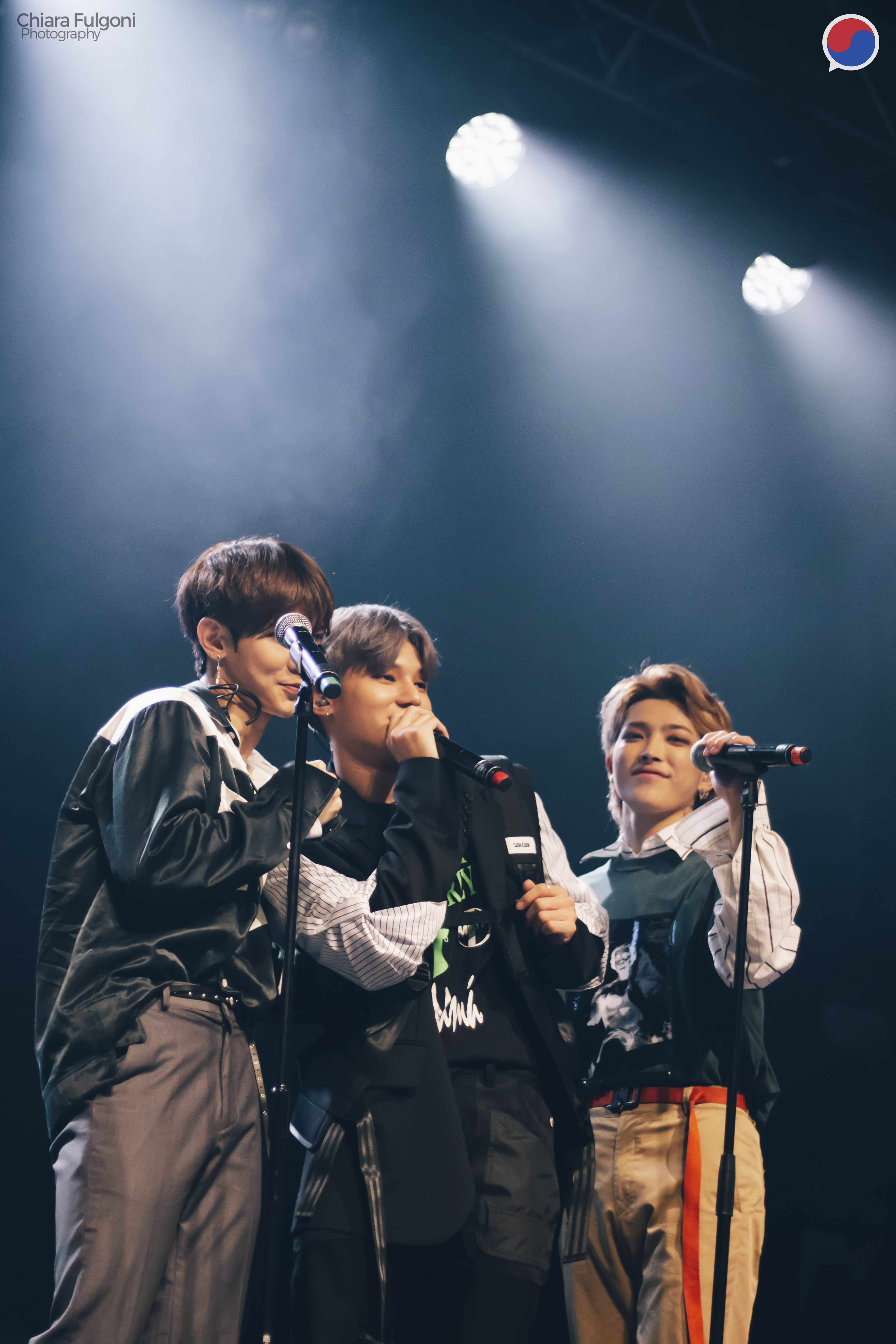 After changing into new stage outfits, ATEEZ got in position to perform ‘HALA HALA’. As soon as the music started the crowd shouted the fanchant for the song. The white light that bathed the stage highlighted their crisp dancing and the dazzling white shirts that they wore. At the end of the song, you could see how much energy they’d put into the performance and could hear the heavy breathing coming from the group. Despite their obvious exhaustion, San told the crowd that he wasn’t even tired because the audiences great reaction energised him. 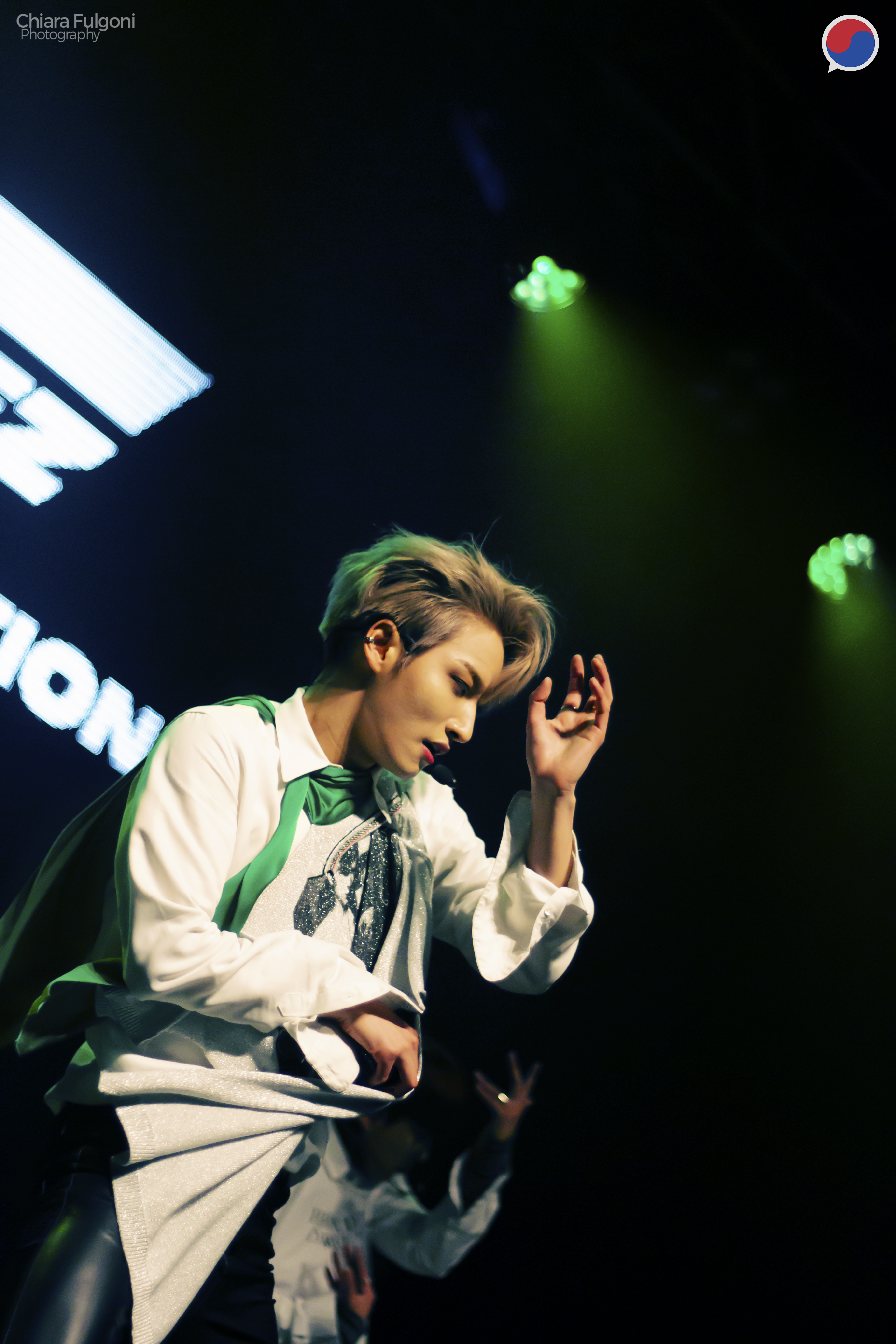 To introduce the next song, the group said: “if you call our name, we promise we will come back”. Immediately, they called “Say my name!” and the fans responded “ATEEZ”. The stage darkened just before the music for their most recent comeback. The audience danced along as the addictive music blared from the speakers. 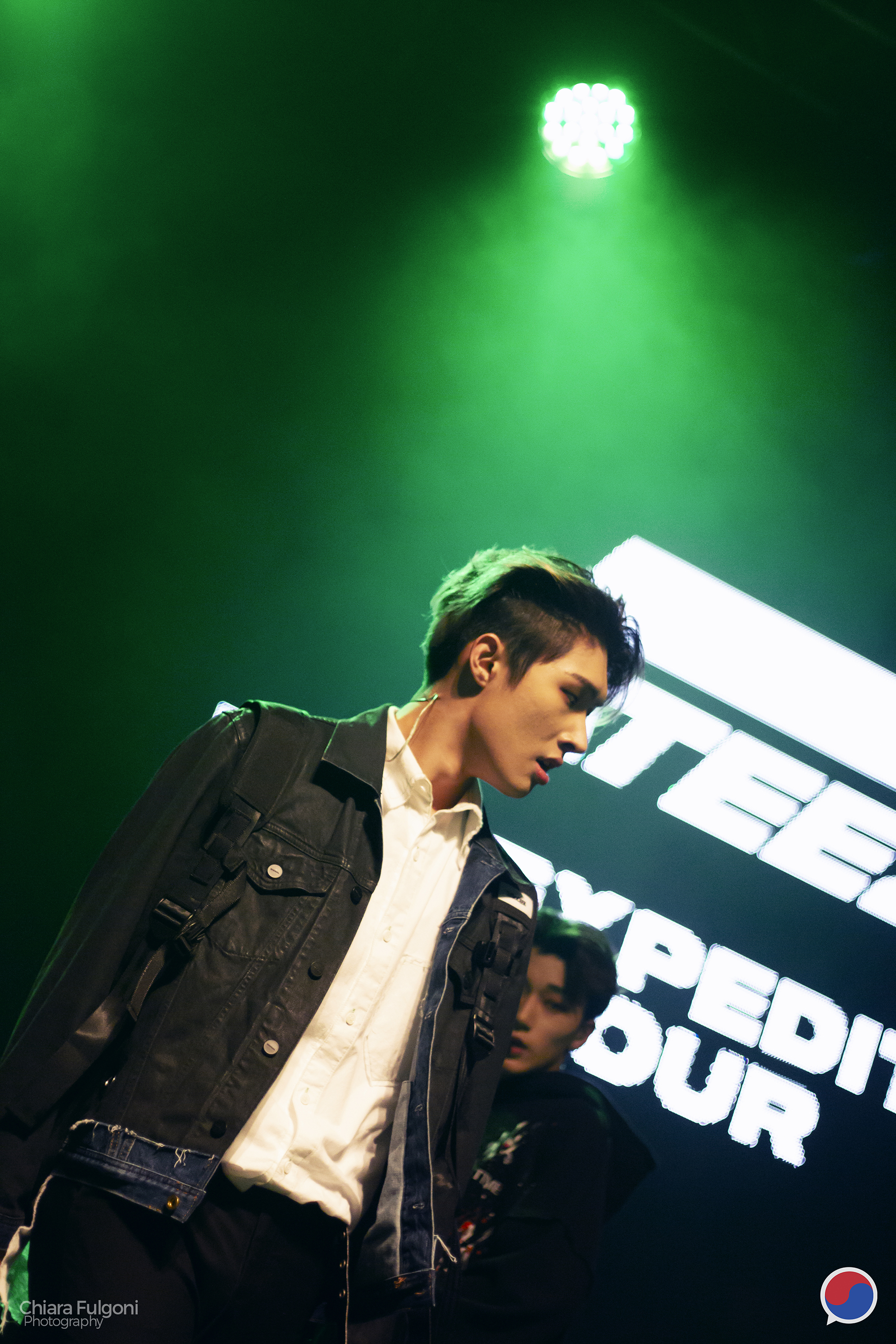 Before finishing the concert, the group made sure to show love to the birthday boy, Seonghwa. Both the group and the audience carolled ‘Happy Birthday’ as a birthday cake was brought out on stage. Seonghwa blew out the candle and started making a speech to the audience. He started to get emotional and the audience chanted “don’t cry” in Korean. The members were shocked and praised the fans, commenting that their Korean was very good.

Seonghwa had one beautiful message for the fans, which he declared in perfect English: “ATINY – you shine brighter than the stars. Please don’t forget it.” 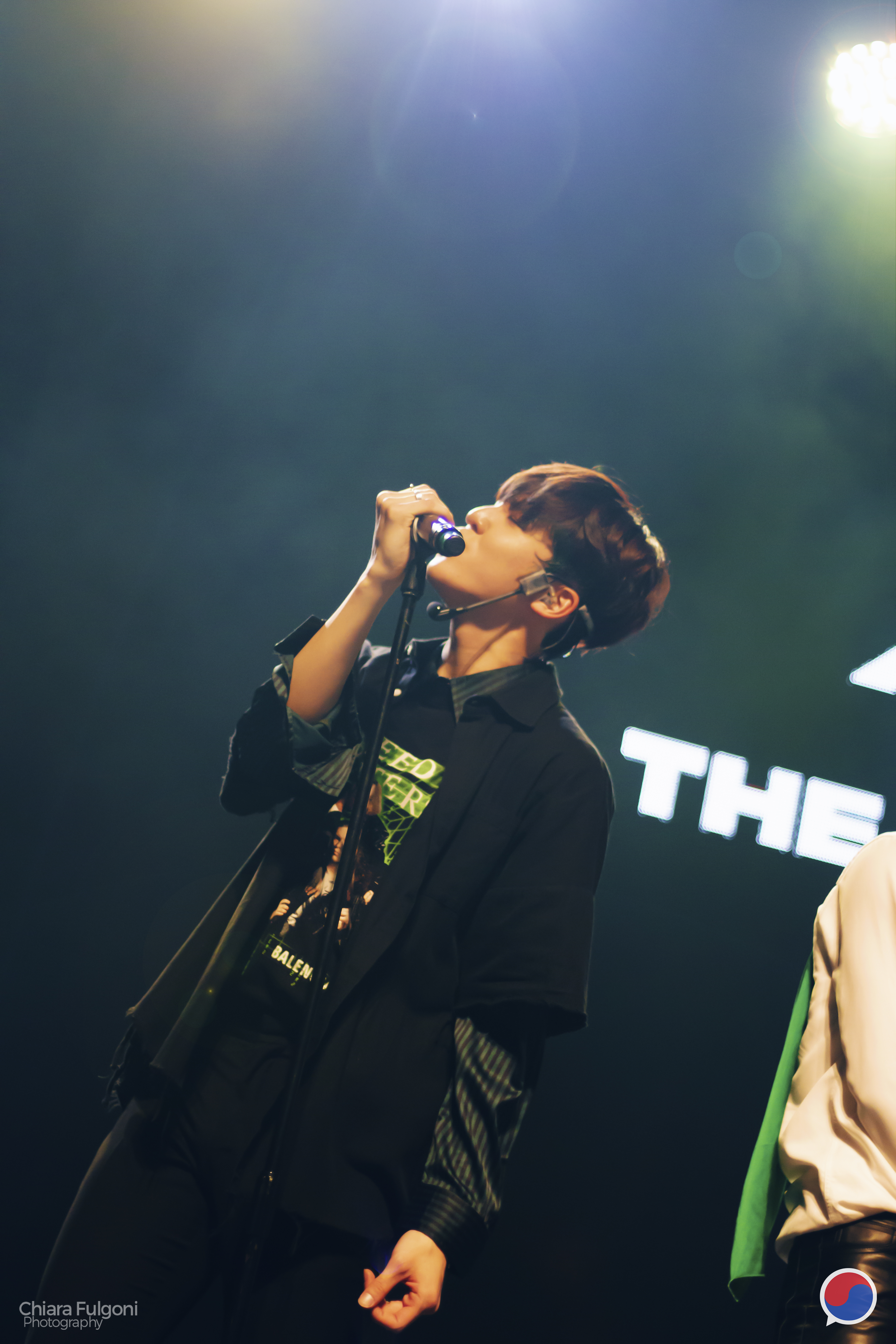 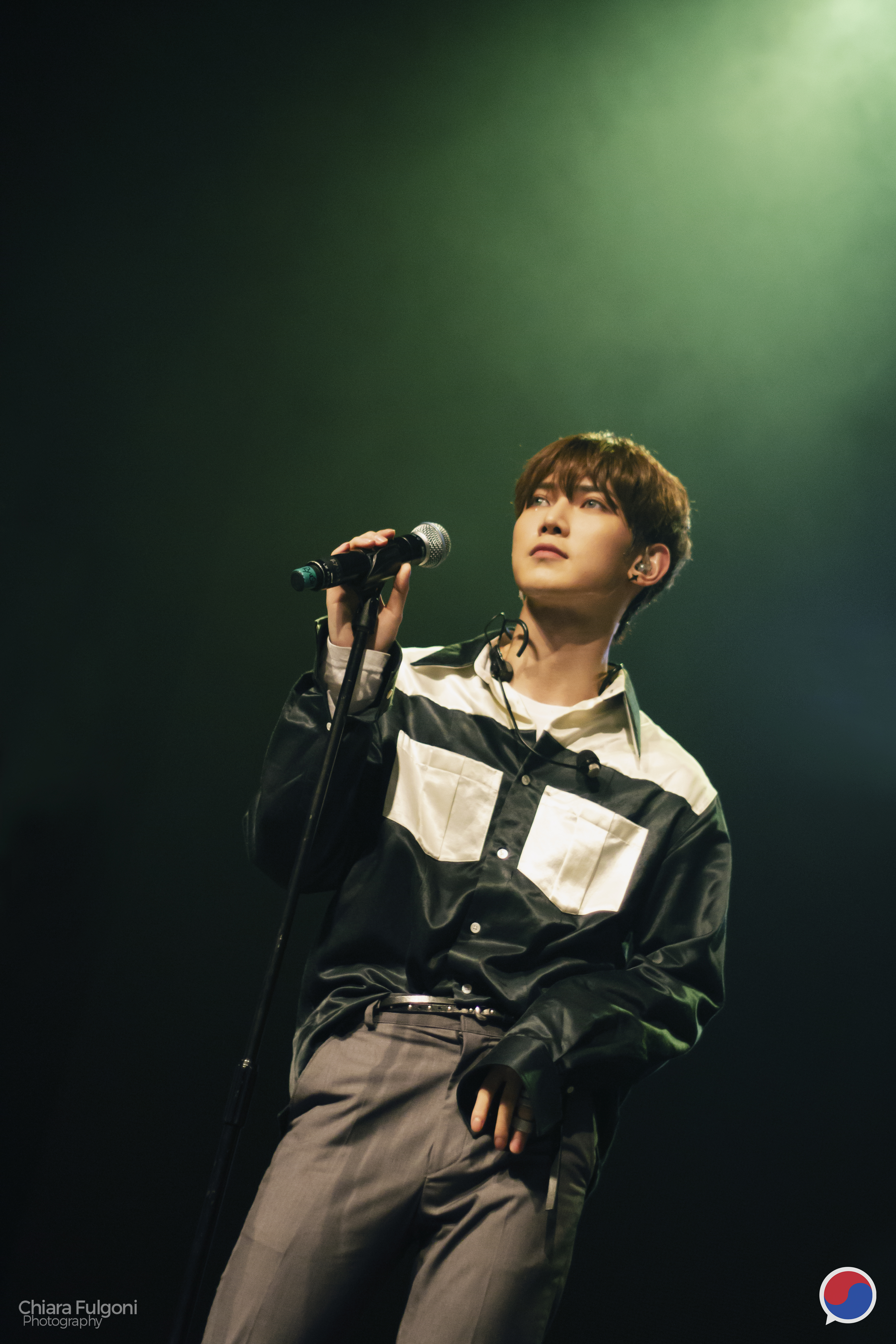 The concert ended as the group returned to their roots and performed their other debut song ‘Treasure’. ATEEZ were passionate to the last second and ended the show perfectly.

During the costume change in the middle of the show, there was a behind the scenes video that was shown to the audience. In the video, ATEEZ’s members showed the hard work they endured for the show. They said they paid special attention during production meetings and rehearsals to make sure the show was flawless for the fans. They confided their worries about not being able to live up to it.

You did it, boys. It was heavenly.