By Samera Iqbal on May 4, 2019 0 Comments
Back when BLACKPINK announced European tour dates, we wondered whether Dua Lipa would join them on stage. It turns out she did, but not in Europe!
On May 1st, the British singer showed up at the group’s Newark concert, surprising everyone in the audience. No one had been aware of her appearance, but once she did appear, everyone knew what was coming. It was a live performance of their duet track, Kiss and Make Up, released last October.
After the performance, Dua Lipa took to social media to share a photo of their soundcheck. 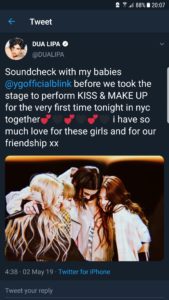