Trending
You are at:Home»Original Content»Editorials»[OP-ED] Can Idols ever win? Beauty Standards in Kpop

[OP-ED] Can Idols ever win? Beauty Standards in Kpop

South Korea often gets referred to as the Plastic Surgery Capital of the world; so it shouldn’t come as a shock to you that appearances are judged, praised or criticized heavily within society. From visiting Korea myself there is almost no escaping the multiple plastic surgery clinics, beauty shops or advertisements endorsing the latest trends on what feels like every street corner.

Many idols will gain attention for their visuals, receiving multiple praise and compliments. Their names appearing in multiple chat forums, forever growing lists of “Most Beautiful Kpop Idols”, “Best Visuals” some of which are even voted amongst idols by idols!

In fact there is a whole position in a Kpop group called ‘The Visual’, given to an Idol based on looks. Nearly every group has one, where that member’s role is to be the ‘face of the group’. This is not to say the Visual’s in these groups lack talent, there are many who have proven their worth in their group through their outstanding artistry. But when you hear stories retold from Idols about how they were scouted on the streets to join their entertainment agencies based solely on their appearance, it makes it hard to believe these agencies prize talent over selling a face or look. This isn’t to completely disregard Idols, who joined their respective agencies this way, their appearance may have opened the door to being a trainee but their hard work and dedication got them their debut but it reflects what this industry prizes more, reinforcing that manufactured stereotype.

Natural beauty is praised above all and an obsession begins to form within the Kpop community once Idols post baby pictures of themselves (some fans not even waiting and hunting down the photos themselves) to analysis and scrutinise whether there are notable differences in their past to present appearance – were they born perfect or did they enlist in the help of a plastic surgeon to achieve their flawless beauty. The same can be said for the need to catch images of idols ‘barefaced’, to see if their beautiful faces are highlighted with make-up or natural. There are articles upon articles listing idols that are deemed ‘still pretty even with no make-up’.

The idols who do not naturally achieve our unrealistic and shallow high standards are often mocked and ridiculed. MAMAMOO’s Hwasa talked about negative comments from netizens about her appearance on an episode of MBC’s Radio Star. The idol discussed how many netizens voiced their opinion on her appearance, commenting that she wasn’t pretty enough to be in a girl group and some even wanting her to leave MAMAMOO because she was too “ugly”. Hwasa however, didn’t let these comments bring her down or knock her confidence; in fact she used them to become stronger and motivate herself to prove that she is worthy of being in the group.

This sadly can’t be said for every idol who deals with this level of criticism. 2NE1 were often referred to as ‘The ugly girl group’ in the industry which maknae Minzy has spoken up about during a Billboard interview and how it had a negative impact on her mental health. And why wouldn’t it? As entertainers, idols are always watched with our judgmental consumer eyes but they are still human, they still have the same insecurities and vulnerabilities as we do. Appearance should never outshine talent. Joining the industry at such a young age and being subjected to these horrible comments while still only a teenager was hard for Minzy to deal with and process, especially when Yang Hyun-suk, the previous CEO of YG Entertainment would call them “really ugly” on more than one occasion to them directly!

GFRIEND member Umji has also often been ridiculed for her visuals by netizens, the comments were particularly bad in 2016 while they were still rookies and new to the industry. Umji and her appearance became a popular topic of discussion for cruel netizens, including her in lists or Twitter threads titled; ‘Members Who Bring the Group’s Visual Average Down’ or ranking high in the Top list of Idols netizens consider to be ‘ugly’. After months of continuous ridicule and being subjected to malicious comments, fans felt it was becoming clear from Umji’s performances and domineer that she was being affected and hurt by these comments. On a particular performance on March 29, 2016, Umji appears to look uncomfortable and nervous on stage while keeping her head down, letting her hair cover her face, which is a big contrast to earlier performances where she looked happy with her head held high while looking at the camera. While some netizens did express concern for her and hoping her confidence hasn’t been completely knocked, this didn’t stop a large number not taking lesson that their harsh words expressed so easily over a computer screen could have harmful and damaging effects on a person. Still calling her ugly but then began to critique her performance abilities and her ‘lack of professionalism’ – comparing her to other female idols who have been the subject of hate comments without letting it affect their performance. One translated comment from PANN reads; “what celebrity doesn’t get hateful comments?” like this behaviour of cruel forums is normal and should be accepted by idols because of their line of work instead of us learning to behave like nicer, and more thoughtful human beings. 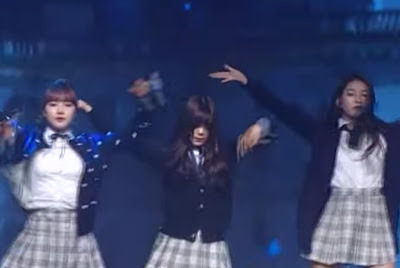 Netizens are also quick to comment on an idols weight, eagle eyes constant on every aspect of an idols appearance and will be the first to comment and criticize on even the slightest of weight gain. Over the years I have noticed this more in female idols, there is extra pressure on female idols to look a certain way and are quick to be criticised if they are noticed to be carrying around a few extra pounds. With male idols however, they are flooded with praise for how healthy they look and how cute their fuller cheeks make them while former F(x) member Sulli’s weight was criticized on television. On the 134th episode of ‘Hello Counselor’ a male guest who criticises his underweight sister for being “fat” he was quick to turn on the girl group members, saying that by his standards Sulli needed to lose weight in her arms and calves. This sadly led to Sulli apologising for her weight and informing the audience and this guest that she was planning to lose weight. No one should ever have to apologise for their appearance. Luckily fellow group member Amber spoke up to address her opinions on the situation and frankly it is something everyone needs to hear and reflect on; “you can have your own opinion, but you shouldn’t hurt other people.”

You can watch the full episode here:

This isn’t to say though that male idols do not feel any pressure to maintain a certain weight and image for their fans; BTS rapper SUGA revealed back in 2017 that he planned to “go on a diet”, explaining even though he is underweight already, that his job involves being in the public eye and showing himself on screen that he has to take care of himself. This emphasises the huge pressure idols are under to look a certain way, in how they carry themselves and present themselves to their audience. g.o.d’s Son Ho Young has previously mentioned how the public’s obsession with his physical appearance negatively affected his mental health. In 2014 during MBC’s “Documentary Special – 5 Member g.o.d’s Return” Ho Young shared that during g.o.d’s hiatus, while performing as a solo artist he began to feel like there wasn’t something he truly excelled in. It began to feel like the majority of fans or viewers were more interested in his body rather than his musical abilities and passion for performing. During interviews and performances Ho Young was constantly asked to lift up his shirt to reveal his muscular body which made him feel like he was only liked and successful due to his physical appearance which could have caused him a lot of self-doubt and worry, but also fear that fans would leave if he did not maintain his fit physique.

We are the first to criticize their crazy diets but first to notice when they have gained weight or praise them for their drastic weight loss. After months of criticism and malicious comments, GFRIEND Umji who was deemed ‘overweight’ and the ‘ugly’ member is now being flooded with praise on numerous forums for her ‘new beauty’ after her recent weight loss. A negative message for young girls, boys and idols that if you lose weight you will be deemed worthy of praise and attention because you fit in to society’s beauty standards.

Although forced to be this idolised and perfect type of person, the reality is idols still have the same insecurities and vulnerabilities as we do. Appearance should never outshine talent. And what happens when an idol, who we have deemed too unattractive to be in the spotlight actually does undergo plastic surgery or goes on a crazy diet? You guessed it, they are still criticised. How can an idol win if they are constantly criticised for how they look or the choice them make towards their appearance.

Opinions expressed are solely the writer’s own and may not represent the views or opinions of United Kpop Ltd.