Trending
You are at:Home»News»Europe»[NEWS] Stray Kids take their place on European iTunes charts

By Samera Iqbal on October 9, 2019 0 Comments
Stray Kids’ Double Knot has charted on European iTunes!
In Europe, the group gained one no.1 spot in Finland. However, the group gained four top 10 places in Norway, Russia, Romania, and Poland.
The song also charted in many other European countries, including the no.18 in France, no.23 in Germany, and no.30 in Italy. 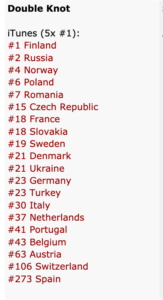 As well as this, the mv for the digital single is currently trending in the top 50 of multiple European countries. In the UK, it is currently trending at no.9.
Check out the mv below!
Stray Kids are a nin-member group under JYP Entertainment. Having proven their worth on a survival show of the same name, the group have achieved amazing feats. Their debut mv, District 9, became the kpop group debut mv with the most views in 24 hours in 2018, a record now broken by ITZY and TXT. As well as gaining their first music show win, the group have also gone on their first successful world tour. You can read our coverage of their London concert here.
Congratulations to Stray Kids on their European success!
Double Knot europe iTunes stray kids YouTube
Share. Twitter Facebook Google+ Pinterest LinkedIn Tumblr Email
Previous Article[NEWS] BTS’s J-Hope skyrockets into the UK’s Official Singles Chart Top 100 With “Chicken Noodle Soup”
Next Article [NEWS] James Corden trolls David Beckham for meeting BLACKPINK without him