Trending
You are at:Home»News»[NEWS] SuperM has successful debut on European iTunes!

By Kristine Phillips on October 4, 2019 0 Comments

Merely a few months ago, an announcement was made through one of the biggest entertainment companies in Korean music, SM Entertainment, that broke the news of their latest project group to debut.

Speculations made over who would be selected to be in this lineup and it was revealed that the members of this SM super group comprised of SHINee’s Taemin, EXO’s Kai and Baekhyun and NCT’s Taeyong, Mark, Ten and Lucas. This selection led to the creation of ‘SuperM’ and anticipation leading up to the debut date only proved to increase following teaser after teaser releases.

D-Day had officially arrived on October 4 and once the press conference in Seoul had concluded, the mini album of SuperM has been unleashed to the world. The self-titled EP contains a total of 7 tracks, including the title song ‘Jopping‘, ‘I Can’t Stand the Rain‘, ‘2 Fast‘, ‘Super Car‘, ‘No Manners‘ and two instrumentals of the first two aforementioned songs in the track list.

SEE ALSO  ATEEZ returns to Europe for 'The Fellowship: Beginning of the End' World Tour 2022
Powered by Inline Related Posts

The album has racked up 31 #1′s so far, including in Belarus, Estonia, Russia and Turkey! It is also currently peaking at #3 and #48 in the UK with the album and title track respectively, #2 in Greece, Norway, Netherlands and holding court in many more European charts!

The album is currently retailing on iTunes for £4.99, on Google Play for £3.99 and you can also stream it on Spotify. You can check out the official M/V for ‘Jopping‘ below, what are your thoughts on SuperM’s debut? 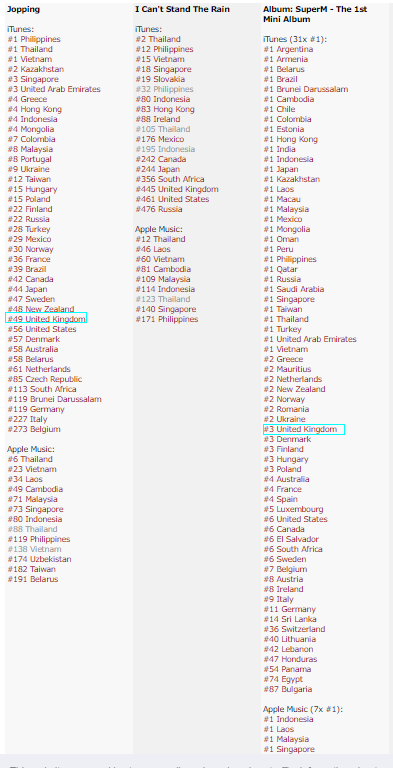