Trending
You are at:Home»News»Europe»BTS to perform on James Corden’s “Homefest Late Late Show”

Monday. Join us for #Homefest @billieeilish and @finneas sing in their living room. @BTS_twt perform from home in South Korea.@johnlegend at home in LA.@DUALIPA with a new intimate performance. @AndreaBocelli from Tuscany. David Blaine, Will Ferrell and so much more @CBS 10pm x pic.twitter.com/e3eGF3du2K

This special is being aired in an attempt to bring “people together to keep them apart”, promoting social distancing – a current worldwide tactic being used to tackle COVID-19.

After previous BTS cameos on the show, it is not surprising that James invited them to partake in this event. Their wholesome friendship radiates positivity, which is something the world needs during these difficult times. 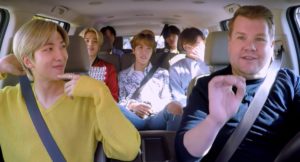 All artists will be performing from the safety of their own homes in this online performance and will also provide information on how to donate to The CDC Foundation and Feed the Children.

Be sure to tune in!