Trending
You are at:Home»News»PSY featured in Metro Newspaper
News

Alongside appearing on Radio One today, PSY was also featured in the Metro Newspaper today following his Oxford University speech yesterday.

PSY received a small feature in the Metro’s physical newspaper, and an article online – which you can read below. His image in the newspaper was captioned;

“Life of Psy: South Korean pop star Psy addresses the Oxford University Union yesterday. The Gangnam Style star – real name Park Jae-sang – led students in a rendition of his No.1 hit. Psy, 34, who was ‘really excited’ to be in Britain, was mobbed by fans when he arrived in London on the Eurostar from Paris.

The full article can be found below.

The pop star – real name Park Jae-sang – led a rendition of his No.1 smash hit after delivering a speech to the Union.

He followed in the footsteps of internationally renowned figures from past and present including the Dalai Lama, Winston Churchill and Mother Teresa.

His song is currently the second most watched video in YouTube history, with over 670million hits and counting.

Discussing his Gangnam Style dance moves, which have inspired a number of online parodies, he said: ‘I stayed up for 30 nights to find that horse riding dance.

‘In Korea, my last five dance moves, they were so famous. This was number six. There was a lot of pressure.’ 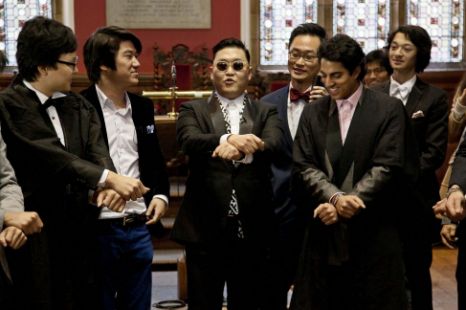 Discussing his overnight YouTube success he added: ‘Suddenly I thought what is going on? There were English comments, and Asian people were fighting over my nationality.’

A spokesman from Oxford Union said: ‘He was invited by the Union’s first South Korean and east Asian president, John Seung-yoon Lee.

‘The president and Psy are both from Gangnam – the area where the eponymous hit song takes its name.’

Psy, 34, said he is ‘really excited’ to be in Britain – having been mobbed by fans when he arrived in London on the Eurostar from Paris.

View the full article and video from the speech here.