This week is the Girl Group Rookie edition, featuring Hello Venus with ‘Do You Want Some Tea?’. As well as winning the poll this week, Hello Venus are the first girl group to ever have graced our Music Video Breakdowns! Let’s see why they made it to the top… (And pardon me for slipping into 1st person this week.)

First of all, let’s admire those dresses! Quite possibly one of the most simple teaser photos we’ve seen in Kpop, the checkered dresses in white, red and black are really cute. There is a playfulness about the outfits that transpires from the varying patterns and colours and those sweet matching headbands. There are no loud neons, no excessively layered jewellery. In fact, it’s as though the outfits are merely politely being worn. The rest of the clothes in the video follow suit. While the concept doesn’t stand out by itself, in the wider context that is the rest of Kpop fashion at this moment, these outfits have a certain demure quality. Spot on styling.

Being a teenage female who thinks I’m older than I really am, the entire ‘aegyo’ concept doesn’t really do anything for me. Girls’ Generation‘s ‘Gee’ was the second Kpop video I saw and it was sweet and funny then. Two years on, I’m over it. Since it’s a big part of Korean culture, I guess they’re still not over it. So I was immediately deterred when I saw the first few seconds of this video and each member was doing their own little bits of aegyo in turn. However, ‘Do You Want Some Tea’ made aegyo fun again! Sprinkled throughout the video are those cartoon effects that portray emotions, that you’d possibly see in things like sticker machines (Neoprints, Purikura, etc) and phone camera effects. These effects have also been featured in Hello Venus’ other videos, including ‘Venus’. 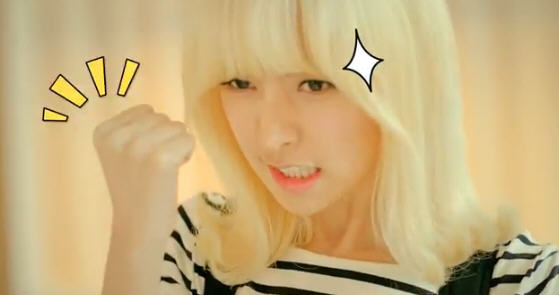 The storyline is rather lovely, though nothing new. Each girl seems to be trying to consummate her relationship with a kiss from the man she loves, seemingly by offering him some tea. (Is this the same man from the ‘Venus’ video?) The lyrics also try to communicate this and, apart from the small use of English at the beginning, they haven’t dropped random English words into the song. A nice change from the regular awkward usages.

The video seems to focus on the drama more than the dancing, and unfortunately there is no dance video. From the limited clips featured in the video, we can see that the dancing isn’t too complicated and the steps are girly and neat. Hello Venus have proved themselves as a dance group with their previous choreography so it isn’t too disappointing to see these simple steps now. The acting goes much further than the pouting and shy smiles at the beginning of the video, with each member having their own scenes in which they use facial expressions and body language expertly (since there are obviously no lines for them to deliver). Perhaps some moments of awkwardness could be interpreted as bad acting, but it could also be the awkward nature of the scenes. The lyrics even say “We’re still a little awkward,” and the whole concept of the video is about pushing past that awkwardness.

Check out the video below!

Vote here for next week’s breakdown.