Between the 1st and the 3rd of may Liverpool played home to the largest international music, digital and film festival and conference in the UK: Liverpool Sound City. The festival welcomes over 360 artists in over 25 venues across the city centre, with the three days drawing in over 40,000 music fans – it is now so well known New York holds a sister event.

This year big names included The Kooks, The Strokes member Albert Hammond Jr,  and Ivor Novello-nominated Jon Hopkins, though you may not be surprised to hear it wasn’t any of the big headliners that drew UnitedKpop to the event.

If you’ve been following us as of late you may have seen a number of indie bands are touring the UK, it was these three groups, and a couple of bonus extras that had us attend the concluding day of Liverpool Sound City, first stop Kazimier Gardens.

First up: PATiENTS. They label themselves ‘hybrid punk’ and if there had been any question as to what hybrid punk entailed before they played it became apparent instantly as they kicked off with their track Hybrid.
With a blend of sounds the trio embody all that is punk, even without a guitarist. The elaborate elements that may have been the forte of the punk guitarist here see themselves presented equally by bass player Sumin Jo, Hyuckjang Kwon on keyboards, and drummer Jaehyuk Lee. The punk comes accented with the experimental electronic tones of new wave and the undeniable addictive nature of pop.
Just as punk should, their lyrics include easy to pick up hooks, that you’ll remember long after they’ve stopped playing. 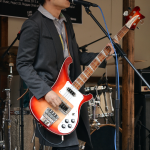 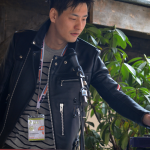 PATiENTS still have four shows left in the UK, and they come with an almighty UnitedKpop seal of approval.

Their fifth track from their Kazimier set list, PATiENTS recently performed SIPALSEGI from their new EP Let’s Drive Let’s Go! for BalconyTV Seoul, the EP is due to be released next month in Korea, but they do have copies with them in the UK. Anyone who gets a copy whilst they tour here will be one of the first people in the world to own the EP.

Like what you hear but can’t make it to one of their shows? PATiENTS were generous enough give us a copy of Let’s Drive Let’s Go! for a lucky reader. Keep an eye on our Facebook and Twitter pages to find out how you can win PATiENTS new EP. Hellivision describe themselves as strong, dizzy, terrible, disgusting, strange. It is a quote from Amélie Nothomb and something Oh thought fitting. They are a psychedelic rock trio known for their live performances, and that is unsurprising.
The trio, Taehun Lee on guitar, bassist Gunwoong Oh, and drummer Jiwan Jung, are purely instrumental.

Watching Hellivision is like an adventure, any belief that you’re listening to just another rock band is soon gone as the group suck you in with their hypnotic sound.

Hellivision are loud, unbelievably loud – but they are technically brilliant rock musicians that deliver none stop, floor-shaking music.

This is the first time Hellivision have taken their music outside of Asia, and Oh explained the group were humbled to see such a positive response.

Those of you up in Scotland that are missing the rest of these groups as they head south will be pleased to hear that Hellivision are heading off on their own. You’ll be able to catch them tomorrow, 6th May, at 13th Note Glasgow at 9.10pm.

Dead Buttons stand out from the moment they get on stage, the first thing you’ll notice about this duo is they sing in English meaning even if you don’t know the lyrics you don’t need to know Korean to understand what Dead Buttons are singing about.
Both guitarist Jihyun Hong and drummer Kanghee Lee provide vocals, and their ease in singing in English gives them more of an advantage in interacting with their audience than the other groups show. Hong even raised a toast to the city between songs, expressing his love for Liverpool, much to the appreciation of the locals.

As for their music, Dead Buttons provide an infectious bluesy rock and roll, you won’t be questioning why they’re singing in their second language, Dead Buttons’ music boasts the strong vocals you’d want to hear from such a group.

Thrown into their original set was a cover of Muddy Waters’ Mojo Walkin’ and The Sonics’ Have Love Will Travel, meaning their set had something for everyone. 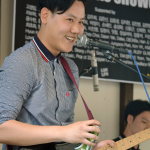 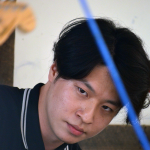 Dead Buttons have four more shows in the UK, don’t want to go on your own? Dead Buttons would appeal to anyone with an appreciation for good rock music.

Last up on Kazimier Gardens’ line up of Korean indie groups was Asian Chairshot. The trio, vocalist and bass player Youngwon Hwang, guitarist Heenam Son, drummer Kyewan Park, really do live up to their name with a hard-hitting blend of psychedelic garage rock.

Asian Chairshot’s sound is powerful, and evokes much emotion with its intensity. Their showmanship is impressive, and you can’t help but lose yourself in their music as you watch the group do exactly the same. 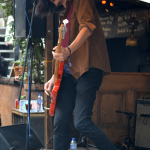 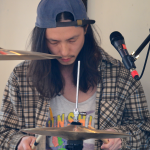 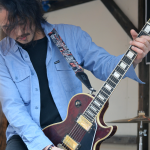 Asian Chairshot are playing The Bell Jar tonight in Sheffield as a last minute addition, but do have another three shows in the UK, though unfortunately their show in Salford has been cancelled.

Next stop: Korova Bar. Points to you if you know that Korova is named after the bar Alex and his droogs frequent in A Clockwork Orange, more points if you know how this links our final group and our first: PATiENTS. Alas, Korova looks nothing like the bar in the Kubrick film – though that was not what we were there for.

Peterpan Complex aren’t strangers to playing in the UK, having played in London previously, and are set to head back down there for a performance at the KCC tomorrow.

During their half hour set the audience only grew to twenty at most, including those the group already knew; but if a small crowd bothered them it didn’t show. The energy Peterpan Complex had was impressive and had everyone captivated and dancing along to their sound.

Even if you have never heard of the group before you won’t leave a Peterpan Complex show disappointed. Another bar patron who had first heard of the group as he entered the bar said the following about the group in a tweet “Top Band! This is a great set!”
Their free show at the KCC comes highly recommended by UnitedKpop.

Hugh Keice too played at Liverpool Sound City but unfortunately we missed his set, no doubt he was impressive as always – and anyone who does want to catch him play can see him alongside Peterpan Complex tomorrow night.