Trending
You are at:Home»News»Europe»[News] TXT and Sunmi chart impressively on European iTunes

By Samera Iqbal on March 5, 2019 0 Comments
TXT and Sunmi’s releases made their way onto European iTunes charts!
Sunmi’s ‘Noir’ scored a top spot in two European countries: Slovenia and Dominican Republic. The song also charted in the Top 100 of 14 other European countries, including No.19 in Sweden and No.94 in United Kingdom. 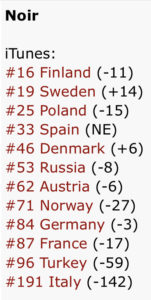 Check out ‘Noir’ below.
As for TXT, they had a much better ranking on European iTunes. Their debut album, ‘The Dream Chapter – Star’ took the top spot in 16 European countries, including Spain, Greece, and Turkey. In the United Kingdom, however, the album missed the top spot, and, instead, charted at No.2.

The charting is as expected of the group, who are signed under the same company as BTS. Check out their debut track ‘Crown’ below.
Congratulations to both Sunmi and TXT on their European success!
europe iTunes Sunmi Txt
Share. Twitter Facebook Google+ Pinterest LinkedIn Tumblr Email
Previous Article[UPCOMING EVENTS] 04/03/19 – 10/03/19
Next Article [TOP 10] Idol Group Soloists