Trending
You are at:Home»Events»Concert»[COVERAGE] Eric Nam in London

The pop singer mixes party vibes with an inspirational TED Talk during his London concert debut. 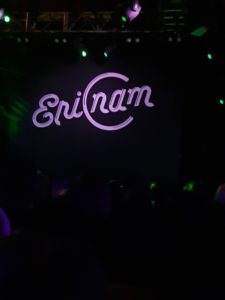 You are plunged into darkness, the letters Eric Nam framing the stage dim, barely visible. Everyone around you chatters excitedly, surely, he is about to come on now, like right now. You remain silent, your hand steady as you hold up your phone ready to capture his entrance. Finally, the music plays and you see a row of men walk out from behind the curtains and everyone starts screaming and cheering. Then the first few notes of ‘Potion’ begin.

One of the most distinctive things about Eric Nam’s rise to fame is probably how the entertainment industry stumbled on him, one YouTube cover earned him a place on Star Audition: Birth of a Great Star 2, which jump-started his career.

Following this, he has hosted many shows, interviewed western medias biggest celebrities, his second EP ‘Honestly’ charting at number six on the Billboard World Album charts. He brings his electro-pop, reggaetón inspired melodies to o2 Islington in London during his first show on Friday 21st June, which sold out almost immediately.

When Eric Nam and his dancers appear on stage there were no costume changes, it was just simply pink shirts donned with jeans, what you see is what you get and what you get is a show. Nam begins the show with ‘Potion’, one of my personal favourite songs from his EP. Nam’s reggaetón inspired song inspired some amazing dance moves, from an ever-smiling crew and from his audience members. His smile continues throughout the setlist.

One way to describe Eric during these two hours is euphoric and happy, despite the more mature themes of this album he never forgets his childlike and fun persona, revealing that his concert amusingly is a mixture of music and ‘Ted Talk’. The Ted Talk appearing as he recounts his previous shows on his European Tour and his mother’s reaction to his raunchier songs. ‘There is too much Sex, God is watching.’ 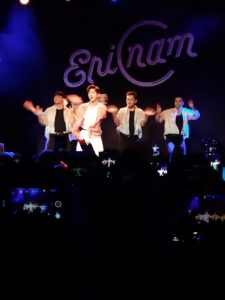 Nevertheless, he puts the sexiness aside in order to romantically hand out roses to lucky audience members during his rendition of ‘Interview’, and he ardours the audience with a short compilation of his OST’s ‘Bravo my life’ and ‘Beautiful’ with no music track, just pure honey vocals.

Eric Nam often performed without his back up dancers and back up vocals, relying on an engineer to command his stage. He commandeered the concert with charisma and commanded the audience’s attention with his bright personality and his voice ricocheting around the packed room. His ballads often stripped down to quieter and subtle tones in order to showcase his vocal abilities. But with the more preppie songs such as ‘Don’t Call Me’, his back up dancers stole the show with synchronized drops and kicks and body rolls, choreographed to suit the vibe of the song, every time.

Whilst performing alone, Eric makes sure his dancers and support act have fun too, calling them to the to freestyle to ‘Idea of You.’ No rehearsals needed. He also managed to cause one of the speakers to give off high feedback, possibly deafening him in one ear and being one of the more comedic moments from the concert. He then ended his performance with ‘Honestly’ and with one of the only costume changes of the night were he and his dancers wore hoodies on top of their outfits, he ended the night with a bang leaving all of us wanting more.

Whilst Eric Nam leaves London in order to create more music, the members of the star-struck audience are left dizzy and smiling. Eric Nam could take off in different directions in the years to come, but it is evident that he is one of the more real and vibrant people in the industry. Whilst his fame has not yet reached prodigious amounts, he is still memorable. His electro-pop, reggaetón inspired songs refreshing against an often-uniform industry, his addictive smile and personality will never let him go out of style. I look forward to seeing him on stage hopefully sometime in the close future.