Trending
You are at:Home»News»Europe»[NEWS] UP10TION and Dreamcatcher to Attend European K-Community Festival!

Ever wanted to see UP10TION up close? What about watching Dreamcatcher live? Well, it looks like your chance has come. The two groups will be performing at the Korean Community Festival Concert at the Forest National in Brussels, Belgium on Saturday 5th October.

The festival is held in conjunction with ‘HALLYU WAVE’, which is one of the largest annual events focused around Korean culture in Belgium. The day will be filled with a wide variety of activities such as random play dance, cultural classes, the chance to try on traditional Korean clothing and much, much more! As the event offers attendees the opportunity to interact with so many parts of Korean culture, there is a sense that this concert will be more than your typical KPop show. The two groups will be performing alongside other acts, with many European teams displaying more traditional aspects of Korean music. Kingdom of Hearts will be travelling from the UK in order to showcase their Minyo (Korean folk singing) skills!

The tickets can be purchased for the price of 20 Euros, and the English webpage can be found here.

The event is incredibly flexible, as visitors can decided what they want to see based on their curiosities and interests. Daytime activities will run from 12.00-18.00 and the concert will take place from 20.00-22.00! For more information, stay updated via the festival’s Facebook, and their website. 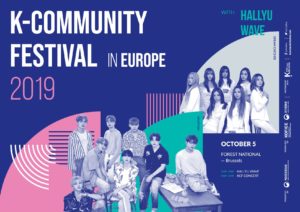