Trending
You are at:Home»News»Europe»[NEWS] Suga claims first UK No.1 on iTunes!

Min Yoongi, known for his stage aliases ‘Suga’ and ‘Agust D’, is no stranger to hitting chart success. Especially within the last year or so, he has scored collaborations with the likes of IU, Max Schneider, Halsey and handfuls more.

It has been close to spanning four years since the release of his first self-titled mixtape back in 2016, which was around the time that BTS’ global presence was reaching newer and broader heights. During that period, it peaked at #13, which was quite the feat for a Korean artist to perform well on the European iTunes charts. Today on May 22, the hit-making songwriter made his awaited solo comeback with ‘D-2’, his second personal body of work to be released.

Now, Suga has followed in his fellow group-mates J-Hope and V’s steps in reaching number 1 on the UK iTunes chart! The ARMY fanbase has successfully helped claim the coveted No.1 spot in at least 75 countries, many including Ireland, France, Spain, Sweden, Turkey, Ukraine and the list goes on and on!

Congratulations to Suga for all the success of his latest mixtape! You can check it out on iTunes here and also on Spotify here. 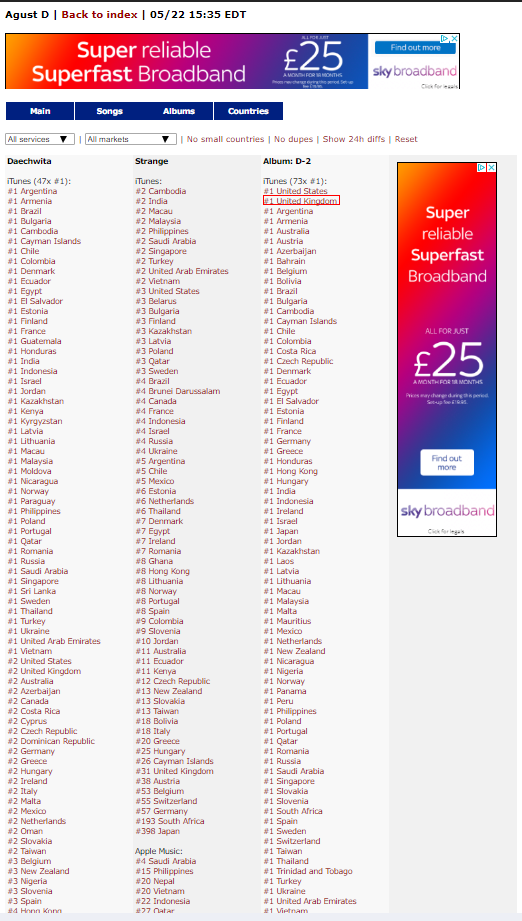