Trending
You are at:Home»News»[NEWS] BLACKPINK break own records on UK iTunes chart with ‘Sour Candy’

It’s full speed ahead on the road to BLACKPINK’s official return next month with Lady Gaga releasing her collaboration track with the Coachella headliner girl group titled ‘Sour Candy‘ ahead of her album’s due date on May 29.

Lady Gaga has kept her 6th studio album ‘Chromatica‘ under wraps for sometime and there were a rumor floating around the internet that BLACKPINK would be making a feature on her latest installment to her discography. Which sent a flurry of excitement from fans across the globe to hear they would be able to hear a new song from the group since their EP ‘Kill This Love‘ was released last April. With Lady Gaga being an international household name, this will no doubt draw the spotlight onto BLACKPINK as they prepare to unleash their comeback song within a matter of weeks.

They dominated the chart with ‘Kill This Love‘ which skyrocketed to #1 in the UK iTunes album chart and #7 on the song chart respectively, making it their highest peaks upon release.

Though, that is all set to change as ‘Sour Candy‘ has been flying up the iTunes charts within hours of the track being dropped. The song has racked up 38 #1‘s which includes Bulgaria, Greece, Poland, Portugal and Turkey. This gives the girl group’s their highest No.1’s for a song on iTunes. It’s currently sitting at #2 in the UK which makes it BLACKPINK’s highest charting song to date. Lady Gaga’s chart topping single ‘Rain On Me‘ with Ariana Grande takes the top reigning spot at #1 so will ‘Sour Candy‘ be able to reach the top?

[UPDATE 29/05/2020] There has been developments since the release of this article, BLACKPINK score their very first #1 on the UK iTunes song chart with ‘Sour Candy‘! They now have a peak number of number one’s listing over 60 which allowed them to succeed a record previously held by Fifth Harmony.

The single can be purchased via UK iTunes here, you can stream it on Spotify here and also on Lady Gaga’s official YouTube channel below! 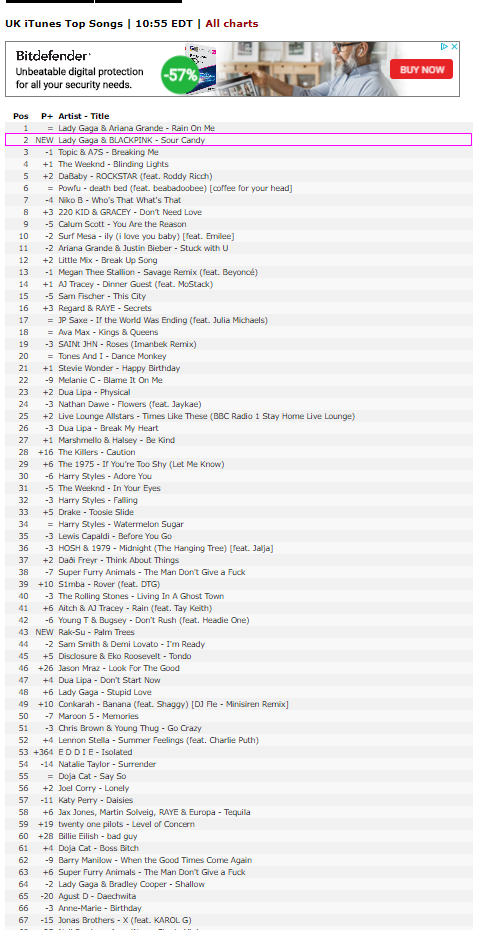