Trending
You are at:Home»Reviews»Album»[Album Review] VeriVery – Face Me 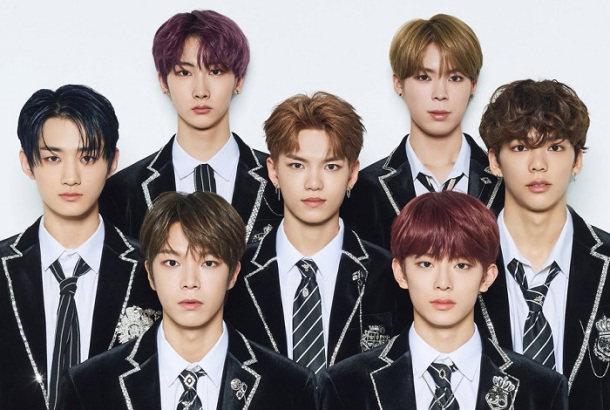 There’s a change in the cards for VeriVery this year. Having celebrated their first year since debut recently, the group has set its sights on a new series, and with it, a new sound. These concept switches are nothing new for the groups under Jellyfish Entertainment, a company that has never been afraid to push their artists to try new styles. For VeriVery, this has meant evolving away from the 90’s inspired, light-hearted releases of their first year, to something with a little more bite. Whether or not it’s a style that matches well with their name (another trend with Jellyfish’ new groups), it’s something they can pull off well in both visuals and performance, but does that translate to the music?

Opening with ‘Photo’, Face Me wastes no time in trying to prove it’s weight as a mini album. The heavy bass and minor sounds, enveloped with whispers, instantly call out the switch in tones from VeriVery’s previous work. The first verse hinges mainly on rap, something that hasn’t been all that prevalent in the past, yet it works well. Rappers Hoyoung and Dongheon don’t put too much power into the lines, just enough to make it easy to get into. By the time we reach the pre-chorus, there is a need for a melody, and lucky that’s what we get. Whilst it’s not designed to be an earworm of any sort, the light vocals from Gyehyeon and Yeonho combined with the dreamy, subtly echoed synth underneath give the song the breathing space it needs before the chorus. This is perhaps the highlight of the song, as the chorus that follows doesn’t hold much impact. The minor notes and changes in tempo with the lyrics keep it interesting enough, but this isn’t what’s left in your mind at the end of the song. However, if performances are anything to go by, that’s exactly what this song is – per4formance driven. And it certainly has the low key sound for it.

‘Lay Back’ follows much in a similar vein, but with much more going for it. As the title track, that’s a great thing. The overall sound, a ‘laid back (if you will excuse the pun) dance track, evokes comparisons to something Taemin might releases, with this only being untrue during the rap driven verse. The majority of the first verse is driven by some fantastic bass lines and clicks, and when the instrumental does kick in, it’s full of low, long synth notes and a trap build up top the chorus. The boys show off their solid vocals here too, reaching high notes without sounding strained. This all drops out into the bass-driven first part of the chorus, with the chant of the song’s title. This is guaranteed to stick in your mind, which is clever considering its simplicity and lack of melody. Thankfully, the chorus doesn’t stick to this the whole way through. It fills out two bars later, with more vocals and an upbeat rhythm. For the final chorus, they skip right to this second section, keeping the energy high. It never gets too upbeat despite this, always pulling back in, be it for the bridge or the verses. There isn’t much new ground tread here, but what footsteps the group has followed in have been matched with confidence and precision. It’s a strong choice as a single and a springboard for more in future outings of this concept.

Taking a step back into something a little sweeter and familiar, ‘Paradise’ starts off melodic and bright. It maintains this throughout the first verse, with only small hints to the tropical house lead chorus. When this main chorus appears, it really does place most of the emphasis on the instrumental. The vocals up until this point are pleasant, well performed but perhaps a little restrained. It’s a shame that they aren’t given a chance to flourish during the chorus. Equally frustrating is the great little rhythm guitar that comes in during the post-chorus – frustrating only because more of it should be heard throughout the rest of the track. ‘Paradise’ isn’t a lacklustre song by any means, but there are elements that could be stronger in places to really push it forward.

‘Curtain Call’ opens with some of that guitar that should have been more present in Paradise. It’s the most upbeat track by far on the tracklist and serves as a nice change of tone for this reason. The instrumental is layered and full, and whilst the chords don’t do much interesting in the sense of movement, it’s an easy to listen to progression that just keeps the whole thing bopping along nicely, until one particular chord in chorus appears as a little surprise, unexpectedly breaking up the repetition. The small break before the chorus also helps to do this, as it feels somewhat offbeat, yet not too much to disrupt the song. For the lighthearted, almost anthemic sound the group goes for by the end of the song, ‘Curtain Call’ works well.

And right after all that energy, the album pulls back to a quiet finish. The opening guitar strings of ‘Moment’ promise a sweet ballad, and they continue to deliver. The boys’ vocals really get a chance to shine here. There are some beautiful, full-bodied harmonies throughout the chorus, the vocals light and breezy. A live version of this song would no doubt be a fantastic way to prove their voices even more. The song never builds in it’s instrumental – only a few light percussion additions appear – and this is a good thing. The movement and progression are built around the vocals, which are layered, harmonised, and adlibbed over to create a fuller sound. It’s only by the time the final chorus comes and the last line is sung into silence that the change is noticeable. Again, whilst this doesn’t try to do much new, it shows that VeriVery are, well, very very capable of pulling off multiple genres.

This mini-album is a promising outlook for the group, with an assured performance and sense of style. Hopefully, they can expand upon this with each release to come this year, further refining their sound and growing their fanbase with it.