Have you ever wanted to watch a group of people in animal costumes pretending to be those animals in order to keep a failing zoo open? If your answer was ‘yes’, look no further.

The 2020 low-brow comedy film Secret Zoo revolves around junior lawyer Tae-soo (Ahn Jae-hong)’s efforts at helping a failing zoo swing its business around in three months. Although he hoped to secure a position in a large property firm, he ends up as an intern for the zoo’s director and is left to his own devices to get animals into the cages and customers through the gates. 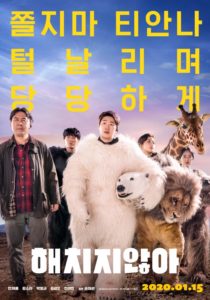 Buying new animals is simply not an option, so he decides to purchase realistic animal costumes for his staff to wear. This really shouldn’t work, but after an incident featuring a polar bear with a bottle of coca-cola, the crowds start to flood in. All of a sudden, everyone wants to observe the animals that act as if they are human; the gorilla is seen driving a golf cart and spraying the audience with more coke.
While the premise of the film on first glance is an original one with a lot of potential, in director and writer Son Jae-Gon’s hands, the production falls rather flat. Characters do not have much depth, and the film relies on an extortionate amount of close-ups of the actors in order to try to get the audience to feel connected to them. The dialogue is flat, and serious issues that are brought up, such as the issue of being caught for committing fraud, are wiped under the rug in order to spend more time on the gags. All of the humour comes from the physical gag of the film revolving around humans pretending to be animals, which becomes repetitive and boring quite quickly. While the constant Coca-cola product placement would be tolerable in other cases, here it simply feels like the final nail in the coffin for an awful film.
Watch the trailer below:
Ahn Jae-hong Film secret zoo son jae-gon
Share. Twitter Facebook Google+ Pinterest LinkedIn Tumblr Email
Previous Article[NEWS] Cult of Ya postpones PH-1 tour in Europe
Next Article [NEWS] BTS’ V takes over European iTunes charts with “Sweet Night”