Trending
You are at:Home»Reviews»Dramas»[WATCH] The Sound of Your Heart 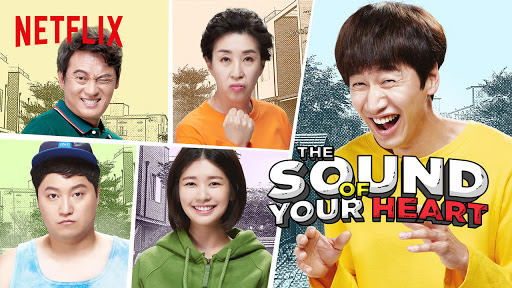 [WATCH] The Sound of Your Heart

The web series, which ranked no. 1 on Sohu TV after its release stars one of the kings of Korean comedy, Lee Gwangsoo, and also features special appearances from many famous Korean faces including Song Joong-ki, k-pop girl group LaBoum and Kim Jong-kook.

After watching the show with someone who knows very little about Korean pop culture, it is clear that the shows slapstick and in-your-face humour is funny for everyone. It is this comedic talent that shines throughout the show despite the programme also having sentimental and romantic moments. Every single episode had me laughing out loud and cringing at the absurd antics that the characters get up to.

The show’s humour is amplified when you’re a kpop and k-drama fan as it makes fun of serious k-drama clichés and directly mimics TV programmes such as Hidden Singer.

A lot of the humour comes from the characters who are expertly written to have distinctive personality traits that make them funny in their own right. The actors also do an excellent job in making the characters come alive so that they seem like real people who end up in unfortunate situations. It’s easy in a time like this to get lost in their lives for ten episodes and forget about reality as you fill the room with laughter.

Though there are ten 30-minute episodes on Netflix, they are made up of two short episodes with individual plots so none of the jokes or storylines aren’t dragged out for long enough that they’re no longer funny – they’re the perfect length to keep you on your toes. The only criticism is that there’s not enough of them! But, fear not, because you can always watch the original webtoon or the reboot series which is available on Netflix if you’re craving more of Cho Seok (Lee Kwangsoo) and his family.