Trending
You are at:Home»Original Content»Editorials»[OP-ED] Does the Kpop industry have a responsibility to speak up about Black Lives Matter?

[OP-ED] Does the Kpop industry have a responsibility to speak up about Black Lives Matter?

This week has seen the start of a global revolution. ‘Black Lives Matter’ – 3 words that have dominated news reports, social media, articles and conversation. The horrifying video of George Floyd’s death at the hands of a White police officer has sparked international outrage. Protests and riots have erupted in multiple countries across the world, from the US to Kenya, from Iran to Japan and more. The movement, which aims to highlight the systemic and institutional racism the Black community have had to endure, has finally dragged the issue of White privilege and supremacy out into the mainstream.

CL’s ‘Baddest Female’ video is infamous for its blatant appropriation of Black Culture.

From its inception, Kpop has survived by prioritizing the marketability of its artists above all else. This is why trainee and artists contracts are so strict – no dating, no scandals, no controversies of any kind. If artists were to speak freely about political, social and cultural issues both in Korea and outside of it, it leaves room for the public to disagree – with disagreement comes backlash. This deafening silence concerning Black Lives Matter from the Kpop industry is a result of this – South Korea generally has a conservative and historically racist attitude towards Black people, immigrants and foreigners. Although this is slowly shifting, it would still financially wound agencies if their artists were seen publicly supporting unpopular causes. To prevent this, most of the Kpop industry are choosing to ignore it and stay silent.

Yet when we look at the origins of Kpop, the hypocrisy is astounding. Kpop’s beginnings can be traced as far back as the 1800’s, rooted in the time of Japanese oppression of Koreans. Kpop has a past tainted by unjust prejudice. It is a disservice to Kpop’s complex history to then ignore the Black community’s unjustifiable oppression, especially when the Kpop industry has exploited and appropriated Black culture for years. R&B, hip-hop and rap – genres which were curated by Black people experiencing the devastating effects of institutional racism – have very clearly shaped Kpop into what it is today, yet no credit has been given to the community Kpop has shamelessly stolen from.

Too many times we’ve seen Kpop artists cherry pick aspects of Black culture to emulate a particular aesthetic. From braiding their hair in cornrows and other traditionally Black hairstyles, wearing ‘grillz’ to using imagery and music styles popularised by the Black community, Kpop and K-Hip Hop artists steal aspects of the culture for capital gain and attention. G-idle’s Soyeon caused a stir online when she suggested an ‘ethnic hip’ style performance on the TV show ‘Queendom’. Immediately, she drew comparisons between ‘African culture’ and primitive sounds/actions such as ‘tribal chief cries’ and banging on tables, even going so far as to claim that it’s ‘their [G-idle’s] style’ whilst co-opting ‘African’ instrumentals in their performance. Not only is this a tribalistic interpretation of African culture – which is so diverse and not homogenous across the entire continent – but incredibly insensitive considering the historically racist implication that Black people are ‘primitive’ and ‘uncivilized.’ It’s not the first time G-idle have done this either: their ‘Uh-Oh‘ video uses imagery, styling and effects commonly seen in R&B styled videos whilst member Yuqi has her hair in bantu knots, a Black hairstyle.

Even major artists have been accused of Black cultural appropriation in the past: from J-Hope’s ‘Chicken Noodle Soup’ in which he wears his hair in twists, BLACKPINK’s Lisa for doing the same in ‘Kill This Love’ to repeat offender CL’s entire ‘Hello Bitches’ dance video or that scene in ‘The Baddest Female‘ – the list keeps growing.

But why does Kpop appropriate Black culture so often? When we look at the wider impact of White supremacy on cultural attitudes across the world, there is a recurring theme of Black culture being painted as the complete opposite of East Asian culture. The ‘Model Minority Myth’ was birthed from White supremacist ideologies. This refers to the stereotype that all East Asians are the perfect example of ethnic minorities, whose existence proves that racism can simply be overcome by a cultural belief in hard work and strong family values. This in turn implied that Black people hadn’t put in the work and were ‘uneducated’, ‘lazy, and ‘delinquent’, pitting the two racial groups against each other. Black people were then seen as the epitome of every undesirable characteristic possible in the eyes of East Asians. This juxtaposition is why Black culture is fetishized by Koreans – it’s seen as being exciting, dangerous and exotic in comparison to their own. A way to flirt with the idea of being ‘rebellious’ without actually crossing the line. This warped perception of what Black culture is to them is presented through Kpop and K-Hip Hop as being borderline criminal, aggressive and ‘gangsta.’

This is seen in BTS’ ‘No More Dream.’ Here, the group are seen wearing outfits reminiscent of those seen in black 90’s rap videos. However, they take it further – with oversized glasses, multiple gold chains, backwards caps and what seems to be afro-inspired hair on RM, the overarching theme of destruction accompanied with the emphasis on rapping make it clear that this is heavily influenced by what their company associated with Blackness and Black culture. Thankfully, BTS have grown from this and have both spoken up about and donated $1m towards Black Lives Matter. 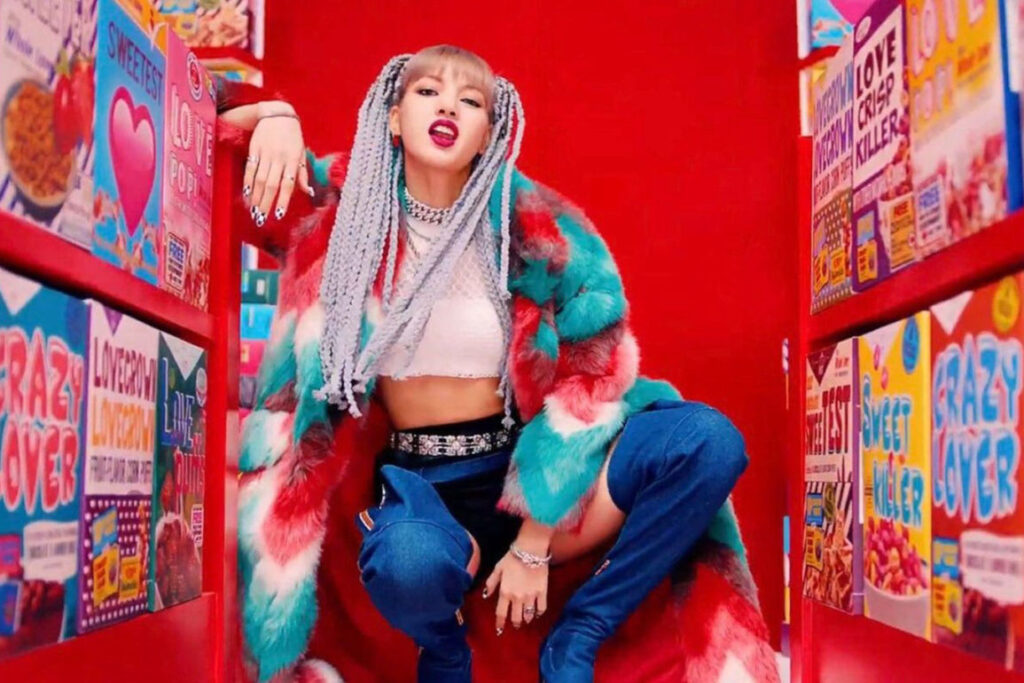 Blackpink’s Lisa wearing her hair in braids, another instance of cultural appropriation.

G-Dragon’s ‘One of a Kind’ adopts a similar theme, staggering around with braided hair and scenes of him having his mugshots taken after committing a crime. At one point, drug use is implied as the camera zooms in on an actor inhaling heavily whilst pressing his finger to his nose. A tiger is used which both reinforces aggression being synonymous with Blackness, and the stereotypical assumption in Korea that Black people keep wild lions and tigers in their houses. Sam Okyere, a prominent Black Ghanaian celebrity in South Korea, recalled his experiences of racism in Korea on the tv show ‘As You Say’: “When I tell people that I’m from Africa, I get a lot of startling questions like, ‘Do you grow a lion at your house?’ I get it so often that now I just respond by saying that my father has two lions.” 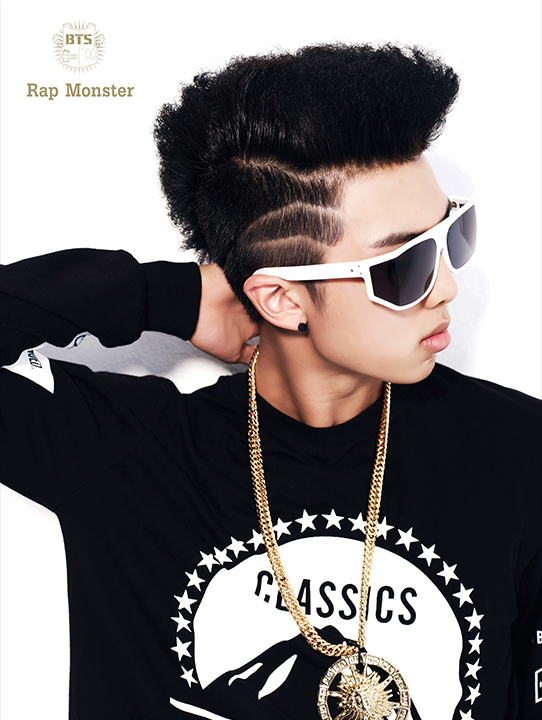 RM’s questionable styling for the ‘No More Dream’ video.

In a more general sense, it’s well known that South Korean society is homogenous in terms of race. Outside of the mainstream media, which can be manipulated to fit certain narratives, Koreans aren’t exposed to different cultures like we are in the UK or the US. Although ignorance is not an excuse – there are plenty of resources online and offline for us to educate ourselves and unlearn internal biases – it’s possible that they may not have seen the need to learn from and appreciate different cultures, because multiculturalism isn’t part of their everyday lives there. In recent years, the hallyu wave has slowly bridged the cultural gap between the Western world and Korean culture, and the international popularity of Kpop grows every day. The Kpop industry is almost a gateway into Korean culture as many foreign fans are introduced to the language, customs and foods of Korea through Kpop culture. With influence in both the Western world and Asia, idol’s support of Black Lives Matter would be hugely influential. It would spread awareness of the movement to domestic fans who may not understand or know what’s been happening in America, in an easily digestible way. Moreover, the cycle of racism would be broken as the message would reach younger Asian fans, teaching them the importance of Black Lives Matter, whilst educating older generations about White supremacy and systemic racism.

So yes, the Kpop industry has a massive responsibility in raising awareness of Black Lives Matter. After stealing from and appropriating Black culture for years, allowing idols to voice their support is the very least they could do. Of course, notable idols such as MONSTA X, Jay Park and Eric Nam have released statements or made donations showing solidarity, which is commendable. But when certain agencies are forcing their artists to delete their #blacklivesmatter social media posts in fear of their artists being seen as ‘radical’, it’s a massive slap-in-the-face for Black Kpop fans across the world who have invested time and money into their favourite artists. Artist marketability shouldn’t take precedence over fighting for fundamental human rights; until entertainment agencies educate their artists and idols publicly release statements, make donations and inform their fans about the Black Lives Matter movement, the Kpop industry is complicit in the continual racist oppression of Black people.

Here at UnitedKpop, we stand in complete solidarity with the Black Lives Matter movement. We have compiled a directory as part of our Together We Are Stronger archive, titled Together: Black Lives Matter, which features Black literature, books, links to petitions/donations, brands and more for your perusal. As our readers, we encourage you to contribute to this archive. We are a community, and together we are stronger.

The Washington Post: Prabal Gurung on the Model Minority Myth and Anti-Blackness within Asian communities.

Is Cultural Appropriation the backbone of Kpop? Southsonder