Trending
You are at:Home»News»[NEWS] BROOKLYN to hold online mini concert

By Keri Baptiste on July 3, 2020 0 Comments
Solo singer, BROOKLYN will be performing a mini-concert on July 11th at 6pm KST.
The concert will be free and held via livestream on his YouTube channel. 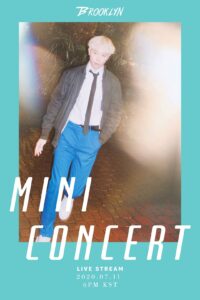 BROOKLYN began his music career in 2017 when he collaborated with an old friend, Ki Hyun Lee. Together, they released the song, ‘Nothing I Won’t Do’. BROOKLYN then officially debuted in August 2019 with the song ‘Young Love’.