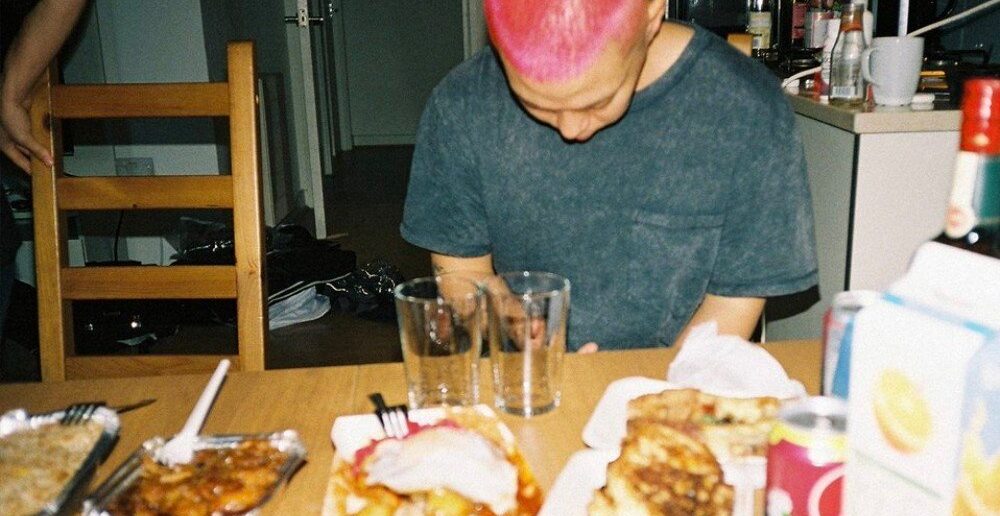 Over the last three months, we have been running the Grab Bag as a way to recommend new and old music from across the genres in Korea. It started off with the idea that the UK would only be in lockdown for a few short weeks, and then things would start to revert to normality. Of course, that was not the case. Instead, even tomorrow when the hospitality industry opens it doors, most of us are still bound by some regulations. Whether it’s working from home or shielding, life is still far from normal for thousands. We hope that during the course of these weeks of social distancing, these articles could be of some enjoyment to you. As this is the last of the series, we have made sure to include a small number more than we normally would, but if you still find yourself searching for recommendations during the pandemic, don’t forget the eleven back issues.

This article wouldn’t be complete without an appearance from the gravy to the Grab Bag’s Sunday roast, so we had to find a way to shuffle our favourite Park, Jay Park, into the mix. Fortunately, last summer’s experimental collaborative project with DJ Yultron has given us the perfect chance to divulge in some of the CEO’s work one last time.

On Fire, a follow-up to the water-testing single “Westcoast,” mixed Yultron’s knack for crafting unrelenting EDM bangers with Park’s sleek, refined vocals. Not without some guest appearances too, this is a shortform education in floor-filling anthems.

Beginning with the titular “On Fire,” the EP gets off to a intensely fast-paced start. Combining short, snappy synth loops with handclaps, modulation and mid-tempo percussion in the verses, the song soon bursts into life with a breakneck chorus, serving everything from brazen, brassy distortion to a catchy pop hook. It leads perfectly into the aforementioned “Westcoast,” a more sonically restrained number driven by nimble synth chord progressions. The modulations and effects are more low-key here, and the highlight is in Jay Park’s smooth vocals as opposed to the frenetic EDM abrasion heard elsewhere.

In terms of diversity, “Say Goodbye,” which features pH-1 and Sik-K from Park’s H1GHR MUSIC label offers that by the bucketload. A trap-synth track which offers a rapid staccato chorus-section before twinkling into pH-1’s personality-filled verse, it’s irresistible in both charm and execution. Emphasised phenomenally by a flawless outro, it’s a highlight of the release, and makes up for the shortcomings of the hip-hop infused “We Be Wildin,” which favours repetitive trap-laden melodies over any idiosyncrasy.

All in all, Yultron proves an interesting collaborator for an R&B artist such as Jay Park, and helps ensure On Fire is a captivating 10-or-so minute listen.

Rumour has it than when Beethoven was passing away, his final wish was to have his soul inherit another musician. It’s unclear whether or not that rumour is true, in part because we just made it up, but it conceivably could well be, especially when one has heard the musical debut of Pengsoo. The parallels between the classical composer and the androgynous penguin are easy to spot; both ahead of their time, both compositionally flawless, and both likely to continue legacies long after their time.

Wisecracks aside, Pengsoo’s “This Is Pengsoo” is actually surprisingly charming, at least for a release born out of a YouTube star harbouring ambitions of reaching the top of the Billboard charts. Mostly simplistic, with BIBI engineering a processed, sleek chorus and Pengsoo delivering a youthful introduction to their personality during his verse (in the bridge he does pull off a yodel solo, though), it’s nothing too experimental, but it’s still something nonetheless endearing. Padded out with an appearance from hip-hop mogul Tiger JK and Bizzy, it’s an easy-listen introduction to a global phenomenon worth no less than one visit.

One of the better tracks to come out of Show Me The Money, “We Are” is a celebration of confidence, and a declaration of intent from young artist Woo. Mostly riding a subtle, bass-centric groove, the release is a pacy, colourful offering which may not have any underlying intensity or intrinsic complexity, but still packs plenty of charm.

In particular, Gray’s part, an earworm of a refrain, helps build on the verses filled with rhythm guitar, synths and snaps, upping the ante and providing an abundance of charisma with his processed sing-song vocal delivery. Slick and effortlessly fun, “We Are” is well worth going out of your way to listen to.

Nowadays, Crush’s music takes a freeform route. Indebted in many ways to R&B artists of bygone eras such as Stevie Wonder, his melodies bleed, his vocals shine and his style is anything but uniform.

At the start of his career, though, things were a bit different. Perhaps down to a lack of comfort, or even shortness of confidence, the 28-year-old centred his releases around R&B simplicity, and pop-like accessibility. Aside from “Hey Baby,” a rousing effort from his debut LP, nothing really stood out as excessively original and, although undeniably good, couldn’t really catapult the artist to the top of the industry.

However, “Sofa,” released four months after his first full-length album, did start to show just how talented the artist was, even if it was, and still is, a complete stylistic gear-shift. Beginning with a flourish of arpeggiated, harmonising strings, the song soon favours a subdued atmosphere, Crush’s resonant vocals meshing with minor-chord piano melodies and backgrounded violins. The initial chorus does add some percussive elements into the mix, but it isn’t until the track’s climax, a superb vocal showing, where things become anywhere close to forefronted. Structured superbly, with its developing, vulnerable tone and gradual climactic finish, “Sofa” is a tremendous ballad which shows a glimpse into another side of the R&B mainstay.

JINBO the SuperFreak – DON’T THINK TOO MUCH

One of Korea’s more low-key producers in terms of popularity, JINBO the SuperFreak has been releasing surefire hits for years without the deserved recognition. DON’T THINK TOO MUCH, his LP released back in December, should have been the breakout album for the artist, but sadly wasn’t.

That isn’t too say it’s not good though, far from it. In fact, DON’T THINK TOO MUCH may be one of Jinbo‘s best projects yet. From the squelchy synths and on-brand sensual feel of the record’s titular track, to the thumping percussion and muted rhythm guitar of the mid-00s inspired “BABY,” all the way to the hazy “EYES CLOSED,” there’s something magnetic about the release which is hard to shake.

It may not land every blow it attempts – “COOLEST FIRE EVER” feels a little too off-kilter – but where DON’T THINK TOO MUCH thrives is in its blunt romanticism and complex approach to composition.

In a way, Eric Nam has been one of the more consistent artists around the Kpop scene over the last few years. Although his music is hardly groundbreaking – it seldom breaks out of a mid-tempo comfort zone for the singer – it still manages to pack an enjoyable softly landed punch, and consistently good is always better than any form of inconsistency, so Nam certainly succeeds in that vein.

When looking for a perfect example of this consistency, no song stands out more than “Runaway.” A mid-tempo acoustic pop track, it mostly drifts along in the verses, Nam’s airy vocals complemented by the non-invasive strums, and downbeat R&B synths. In the chorus, the melody gets livelier, shuffling along with muffled woodwind sounds and a bit more sonic urgency, and the track itself gets catchier. Energetic without trying too hard, it’s a release that will have audiences singing along to without even trying, and shows the Korean-American at his radio-friendly best.

Frantically paced with a rapid BPM, “Workman” is an unrelenting modern pop masterclass.

Loco has always added a bit of diversity to the AOMG roster. Although still a hip-hop artist, his sonic pallet is undoubtedly lighter than a lot of his contemporaries’,  and often a lot more energised. Although there have been moments of keen introspection for the artist – think “Still,” “It Takes Time,” “It’s Been a While” – most releases have an abundance of personality to them, and never take themselves too seriously.

Summer Go Loco, his 2017 seasonal EP, seemed like a perfect amalgamation of this unrequited energy and charisma, delivering four diverse tracks which all have a unique charm. Whether It’s the titular lead-single which brims with funky synths and is syringed with a catchy hook, or “Alright, Summer Time,” a more relaxed, soulful collaboration with Sam Kim which chooses a breezy guitar melody as its central component, everything stays tight and compact.

With that being said, it is the trap-infused, bubbly “OPPA” which shines the most on the EP. Humorous without trying too hard, accessible without sacrificing what makes Loco idiosyncratic and charming without even meaning to be, it’s a song which makes use of its synthesised xylophone sounds to harbour a sticky melody, and emphasises Loco’s pacy, somewhat insecure rapping.

A soft, melodic acoustic track, “May” is Zion.T at his most tempered, but nonetheless smart. Driven by a chorus led by acoustic guitar, punctuated snaps and guitar head drumming, the song smoothly passes by without fanfare, never really amounting to anything other than understated quality. There is an intriguing string section during the bridge which livens things slightly, but on the whole the release stays indebted to melodic acoustics.

A mawkish ballad, “May” is fantastic easy-listening.

A post-military follow-up to Circles was always going to be a hard feat for Golden (formerly G.Soul). On one hand, people now expected the impassioned strength shown on tracks like “Circles,” but on the other, nobody really wants to hear the same release twice, so another gear-shift from an artist with a career full of them was needed.

Tapping into his personal heartbreak which had been a fixture of his mandatory conscription serving his country, Hate Everything did away with the deep-house influences and stripped proceedings right back.

Thus, the album is a frank reflection of his psyche, and shows the artist in a vulnerable, almost helpless state. Lead-single “Hate Everything,” which is dominated by Golden‘s wispy vibrato and a forthright, full piano melody, describes the artist’s apathetic attitude towards life, whilst also offering some pensive reflection on the woman he used to love. Even “Broken Record,” which does up the valence with a groovy bassline and bouncy synths, still has pent up insecurity at the forefront, seeing the 32-year-old struggle to forget his relationship, and lament the fact that “every little thing” reminds him of her.

Fortunately, “Get Up,” a classical R&B number, does offer hope. An inspirational message of picking yourself up when you’re “sick and tired of being sick and tired,” its subtle percussion forefronts the hazy vocals flawlessly, and provides an exemplar EP closer.

Frank and uncensored, Hate Everything is Golden at his open-book best, and sends a message of eventual positivity which we can all get behind.

And on that note, that’s the end of the Grab Bag! We hope you enjoyed at least one of the pieces. Who knows, if all goes wrong and we’re completely locked down again, it may return, like an unasked for Terminator. Until then, though, take care.