Trending
You are at:Home»News»[NEWS] Cult of Ya Announce 2021 Dates for PH-1’s European Tour

As most things have been this year, Cult of Ya announced that PH-1’s upcoming European Tour would be postponed until 2021. 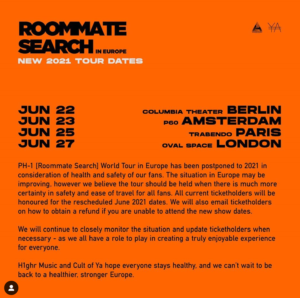 PH-1 will be performing in Berlin on June 22nd, Amsterdam on June 23rd and Paris on June 25th. The tour will end in London on June 27th.

As previously promised, all ticket holders will have their tickets honoured during the rescheduled tour.