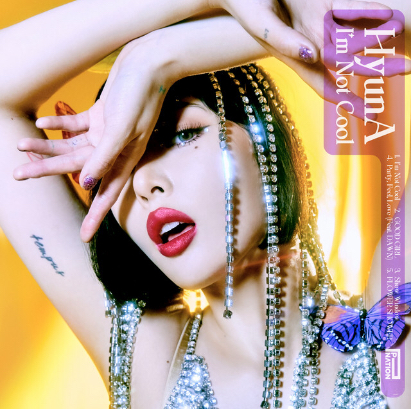 It was while watching HyunA’s “I’m Not Cool” when the current realisation hit me; commercial Kpop works in a way similar to an algorithm on a social networking site. Effectively, they create more of what they believe the audience wants to see based on previous successes. While this is not a new revelation, this article will explain this in detail, looking particularly at the songs and videos featured on Hyuna’s youtube page.

One of the ways in which this is done is the title of videos on their youtube channel. Take HyunA’s “HynA-Ing” series for example. First, all of the episodes are titled using first Korean and then English; this mirrors the way her music videos are uploaded. By following this ‘code’ a pattern the audience is familiar with is established. When comparing episodes 12 and 14 with the more popular episodes which typically have over 100,000 more views, it departs from their style in several ways. First, the title either does not include her name or uses the passive form when mentioning her. Second, they do not feature close-ups of her in the first few seconds of the first clip. This suggests that these features correlate with a successful episode, even if not the most prominent causes for their success. More recently, videos where the thumbnail depicts both her and her partner, E’Dawn, show higher views than those without. While he does not appear in all of the episodes; possibly in order to protect their careers in the case of them breaking up, his regular appearance is to be noted. From this, we can clearly see that a pattern emerges when considering the most popular uploads.

This can also be seen in the music produced, although to a lesser extent. This is in part because there is also a need to appear as a trendsetter; this may lead to departures from what is considered popular in order to set a new scene. In the case of HyunA, her career has often led to her making choices that have been considered controversial. For example, the track “Bubble Pop!” which was released in 2011 was considered too raunchy and censored by the Korean Communications Commission. More recently, her open relationship with E’Dawn led to her having her contract cancelled by CUBE Entertainment. But, Bubble Pop! drew from the “hot girl summer” trend which was prevailing both in Korea and more widely internationally at the time. Katy Perry was busy shooting Fireworks, and singing about California Girls and F(x) were ready for a Hot Summer. The song captures similar emotions while also capitalising on HyunA’s individual quirks as a performer. Similarly, I’m Not Cool could comfortably sit next to Jason Derulo’s Take You Dancing, with its jarring dance beat instrumental after the chorus, and Chunga ft. R3HAB’s Dream of You.

But, that is not to say that those behind the music and videos are automated cogs; after all, artists are inspired by others and build off of ideas that they find inspiring. This is where the algorithm analogy departs. But, like any other business, the music business is here to make money. Some trend-following and youtube search-title tweaking is to be expected.