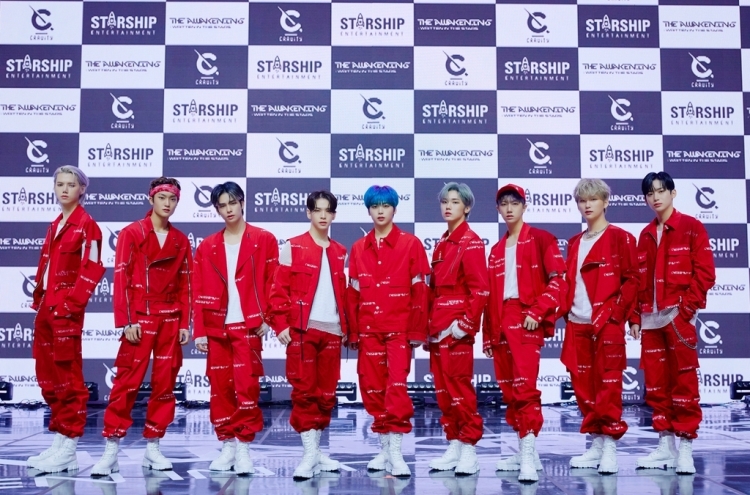 The latest boy group addition to Starship Ent. made their second comeback of the year. This time, CRAVITY made waves with their first full studio album ‘The Awakening: Written in the Stars‘. They made their official debut last year on April 14th 2020. We were invited to attend the press showcase for this comeback which took place yesterday on August 19th. The hour long event was hosted by seasoned MC Lee Minhyuk, from MONSTA X.

The showcase highlighted the album in depth, exhibited a sneak peak into the choreography of the title track ‘Gas Pedal’. Later we see live performances from their side track ‘Veni Vidi Vici‘ and of course the title track. The latter served a strong stage presence with crisp synchronised choreography and an addictive beat of the song ‘Gas Pedal’.

The MV reveal portion of the showcase boasted of a futuristic reality, which resembled a similar theme to the sci-fi film ‘Tron‘. It was adored with neon signs with their names, taking place during the night. This could imply that that’s the future that that is ‘written in the stars’ for them. The video runs smoothly with each transition clip intergrating well with each other.

From the Q&A section, there was a range of reporters from a diverse selection of websites from all around the world who were featured in the questions asked to the group. That can be taken as a good sign that this group is garnering international attention, which is most certainly an encouraging sign.

Allen went on to talk about the meaning behind the album name, “the name of the album means that their destiny is written in the stars and that the nine of them being together as cravity is destiny as well”. In response to how is this album is different: Hyeongjun “the first series says ‘we’ve debuted’ but the new album says ‘we’re here to stay’.” wIth Woobin adding in that the concept for this comeback is “cyberpunk”.

In regards to a song recommendation from their album, Seongmin suggested listening to ‘Celebrate‘. Lee Minhyuk asked the group if there are any variety shows they wish to make an appearance on, Woobin answered ‘Masked Singer’. In response to a question talking about the relationships between the artists within Starship Ent. Woojin spoke about extending an invitation to MONSTA X’s Kihyun when they had the MV filming. After claiming that he could not make it, he came to surprise them.

You can purchase the 8 tracklist album on iTunes here and you can also stream it on Spotify here too. The videos for the live performance of ‘Gas Pedal’ and the M/V can be watched below too.