Trending
You are at:Home»News»AOMG say ‘Follow The Movement’ as they become the latest K-hip-hop concert to come Europe

Did you guys cop the tickets for AOMG's first ever world tour?

Announced on January 9, industry giants and super label AOMG have announced an update as part of their world tour, ‘Follow The Movement.’ 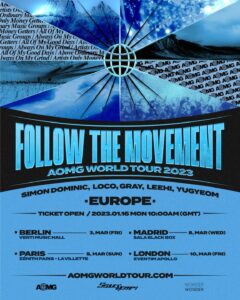 The tour will feature the label’s top artists GRAY, LOCO and Lee Hi, returning to London after MIK Day 2 Hip-hop day in July 2022, as well as rapper Simon Dominic and GOT7 member Yugyeom who look to make their return to London.

The 4-stop European leg is set to start in Berlin on March 3 before heading to Paris on March 5, Madrid on March 8 finally heading to the UK, performing at the Eventim Apollo in London on March 10 with tickets set to go on sale on January 16 at 10 am. 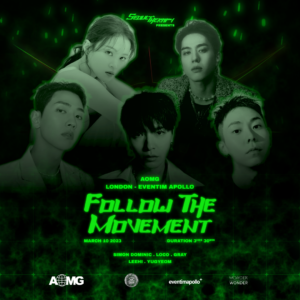 The concert will become the third major k-hip-hop concert of the year after the announcement of Epik High in London and Manchester late last year and the pH-1 London concert going on sale this Thursday.