We Are One! The 12 members of EXO united to bring their unique ‘Wolf’ stage to their fans and although EXO-K have made an appearance here before, this is the first time EXO-M have graced our feature. Today we’re only going to be looking at the Korean version, so let’s not even consider going near those lyrics…

EXO’s Wolf is about the animalistic nature of both a wolf and a man who is attracted to a woman. Wolves are pack animals, they live and hunt as a pack, and this is how EXO are represented in the MV. This is essentially another MV displaying a gang mentality, this time in the style of a wolf pack. From the opening silhouette where the group form the symbolic Tree
Of Life from which they were born they are one, a pack, a strong
unit.
Wolf does have a supernatural element as we see members transform from human to wolf. This merging the both strong ‘gang’ and ‘supernatural’ concepts we’ve seen from young groups over the past eighteen months.
It is interesting to mention concept points that made it into the teasers that failed to make it into the main MV. The first teaser prominently showed the members’ Legend symbols from their creation, implying they were a link to their supernatural powers as wolves. The second teaser expanded on the human gang aspect of the concept in a brilliant way, showing the members fighting, but unfortunately the MV didn’t use the narrative included in the teaser. It’s a shame these aspects were missing from the MV. 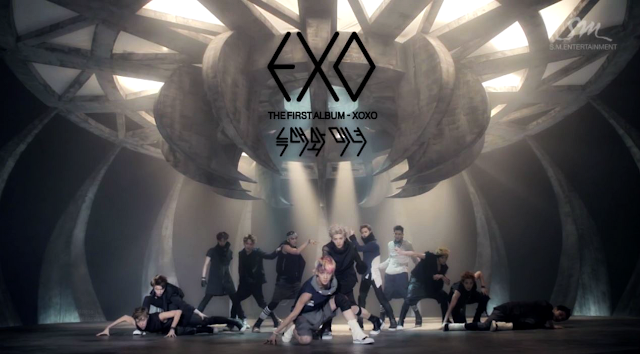 The gang concept really comes into play when we look at the overall styling of the video. The tube socks are back – surprise – and there’s a fluidity and togetherness about the outfits of all the members. While it would have been ridiculous to see EXO sporting full-body wolf suits, the clothing doesn’t seem very related to the song. A gang might be representative of a wolf pack but both elements together are so surreal.  (In particular I’m struggling with Luhan’s fluffy wrist things and Chanyeol’s yellow bin bag top.)

As expected, the video revolves around the detailed choreography that is both entirely unique and exciting. When the members aren’t jumping and crawling across the screen like wolves during group transitions, they’re still behaving like them in manner and motion. Movements are often low to the ground – their knees are bent and their weight is forwards. There are literal ‘wolf’ poses, with the wolf ear choreography in the chorus, and the ‘Tree of Life’ arrangement is beautiful to watch.

Check out the music video below!

Vote here for the video you’d like to see for next week’s breakdown, and tell us what you thought of the video in the comments!

A collaboration between Ella Kaill and Lore Walsh.