With the recent confirmation by SM that EXO’s Baekhyun and SNSD’s Taeyeon are dating, we take a look at 13 idol couples, some still together, others not.

1) EXO’s Baekhyun and SNSD’s Taeyeon – Back in June, SM confirmed that SNSD’s leader and Baekhyun started dating in February, and are in the beginning stages of their relationship!

2) Jung Kyung Ho and SNSD’s Sooyoung – With rumours going on since last year, it was confirmed by both sides earlier this year that the two are dating.

3) 2PM’s Nichkhun and SNSD’s Tiffany – In April this year, Nichkhun and Tiffany went public with their relationship of 4 months.

4) Lee Seung Gi and SNSD’s Yoona – The two have been rumoured to be seeing eachother since September last year, and in December 2013 it was confirmed that the two have been dating for 4 months.

5) B2ST’s Junhyung and KARA’s Hara – Junhyung and Hara started dating in June 2011, and ended their almost 2 year relationship in March 2013.

6) SHINee’s Jonghyun and Shin Se Kyung – The two started dating back in October 2010 but ended their relationship in under a year in June 2011.

7) SE7EN and Park Han Byul – With a relationship of 11 years, rumours started circulating last year that the two had broken up but was later denied by Han Byul’s agency. 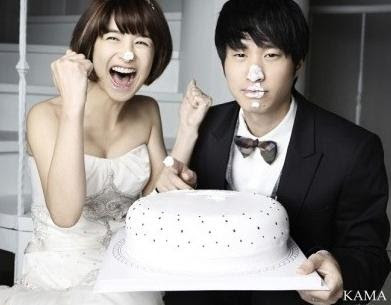 10) Hyun Bin and Song Hye Kyo – The two started dating whilst filming ‘Friend, Our Legend’ together in 2009 but unfortunately broke up 2 years later due to scheduling conflicts.

12) Lee Byung Hun and Lee Min Jung – The couple tied the knot back in August 2013, and are happily married!

Can you name any other couples? List them in the comments below!