Welcome back to this week’s Fun Story! Just earlier this week a rather strange incident occurred involving the glorious Suzy and her devoted and rather desperate fanboys!

The gorgeous Miss A singer and actress is known for her stunning beauty, being voted on numerous occasions as one of the prettiest women of Korea gaining attention from many fangirls and fanboys worldwide.

However little did we really know how dedicated her fans were, particularly her fanboys.

Allegedly it had been told to her fans that they had to write in to the brand advertised: Lillian, which is a women’s sanitary pad explaining why they like the product as well as why they should to be chosen for Suzy’s fan signing event that was being held for the CF(television advertisement) of the product that she starred in.

Naturally, many women submitted messages hoping to be chosen however what was surprising was the amount of Korean men seemingly doing everything they can so that they, also will be chosen to see Suzy in the fansigning event too.

The comments are shown in the image below: 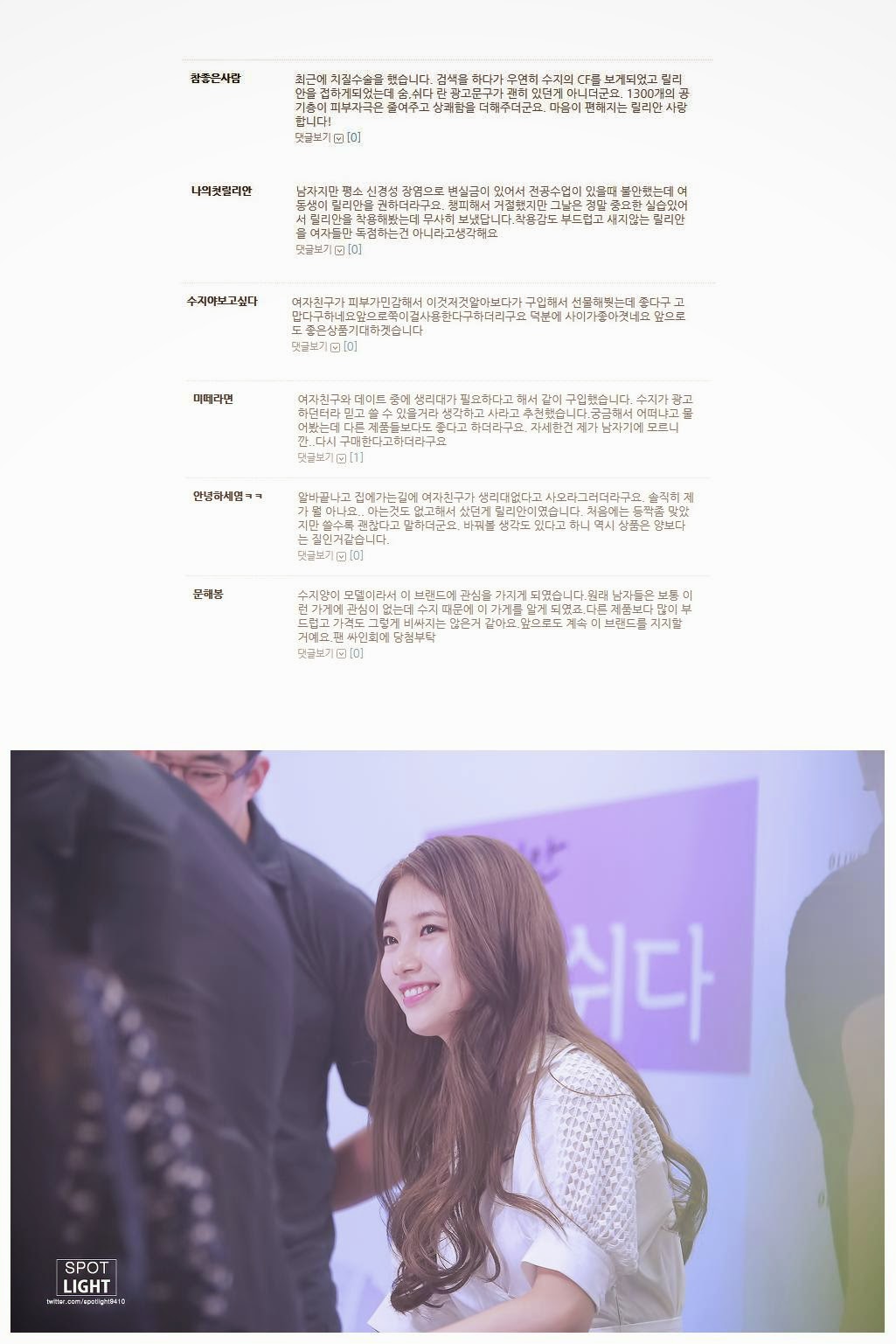 The desperation of Suzy’s fanboys is apparent in the following translation of the amusing comments submitted:

ID (Good Person): “I recently had a hemorrhoidectomy and was looking for pads to wear. Coincidentally, I found Suzy’s CF for Lillian and decided to try the brand out. The brand wasn’t lying when they said it’s a pad that breathes. The pad helped lessen the friction and gave a fresh feeling. I love Lillian!”

ID (My First Lillian): “I’m a male but I’ve always suffered from incontinence from enteritis and felt nervous about attending class and whatnot. My younger sister recommended Lillian. I was embarrassed and rejected it but I had an important on-hands class I needed to attend so I decided to try it out. Fortunately, it all worked out. The pad is smooth and doesn’t leak. I don’t think it’s fair for only women to use these pads.”

ID (Suzy I Want to See You): “My girlfriend has sensitive skin so I bought these as a present for her and she liked them. She’ll be using this brand from now on and we fortunately have a better relationship now. Looking forward to more great products from this brand.”

ID (Mitte Ramen): “I was on a date with my girlfriend when she said she needed pads so I went to buy some with her. I knew that Suzy was a model for this brand so I recommended it to her, knowing I could trust Suzy. I was curious so I asked her how it was and she said she liked it. She said she will be buying it again.”

ID (Helloㅋㅋㅋ): “I was on my way home from work when my girlfriend said she needed pads and asked me to buy some. What would I know… I just picked up Lillian. It wasn’t the brand she wanted but she used it and said it was alright. She’s even considering switching to the brand. Lillian shows that a brand is all about quality.”

ID (Moon Hae Bong): “I began taking an interest in this brand because Suzy’s the model. Men normally wouldn’t know of this brand but I did because of Suzy. I think it’s a lot softer and cheaper than other brands so I’ll continue to support this brand. Please pick me for the fan signing.”

No news of any winners have been known yet, however we can only hope all of their attempts were successful and earned a good laugh from many!

“ㅋㅋㅋㅋㅋㅋ They’re throwing away their manhood for Suzy ㅋㅋㅋㅋㅋㅋㅋㅋ”

“One said it’s not fair that only women can use this ㅋㅋㅋㅋㅋㅋㅋ but pads are for women, silly ㅋㅋㅋㅋㅋ”

“Imagine if EXO did a condom CF…. the fangirls that would try to get into that fan signing….. ㅋㅋㅋㅋㅋㅋㅋㅋㅋㅋㅋㅋㅋ”

What do you think of the fanboy’s attempts?

Would you ever think of doing something like this to meet your bias?