Trending
You are at:Home»K-Culture»Resources»Korean»[WOTW] K-Culture: Food

I love Korean food! There is so much choice from hot street food, cold noodles, Korean BBQ, Korean-style Chinese food, not to mention all the things you can get at convenience stores. The thing I love the most is how cheap it is (compared to British prices at least). Often it’s cheaper to eat out in Korea rather than buying the ingredients and making food at home. In today’s WOTW, I would like to introduce you to some of my favourite foods and hopefully teach you how to read a menu in Korean.

Korean food menus are often split up into different categories. How much of this menu can you read?

If you aren’t able to read Korean yet, check out my previous article on my tips for learning Korean and get started! However, even if you have just learned the alphabet and you are able to read these words, unless you have eaten it before, you are going to have no idea what is what, right? You can’t miss out on all the good food Korea has to offer, so let me take you through it!

So as you can see, all these different headings end with -류. This simply means a type of something. Often the -류 may be left out of the headings. Let’s take the first heading as an example, which is 김밥류. I’m sure most of you already know what 김밥 (Kimbap) is, but if not, it’s basically 김 (dried seaweed) + 밥 (rice), similar to Japanese California sushi rolls, except without any raw fish and the seaweed normally wraps around the outside. 김밥류 simply means types of Kimbap. Under this title, we have a list of all the various types of kimbap: from regular kimbap costing just 1500won, to 돈까스김밥 (donkatsu; pork cutlet) which is still only 3000won (about £1.50; I have also written a lesson on using Korean numbers and money). 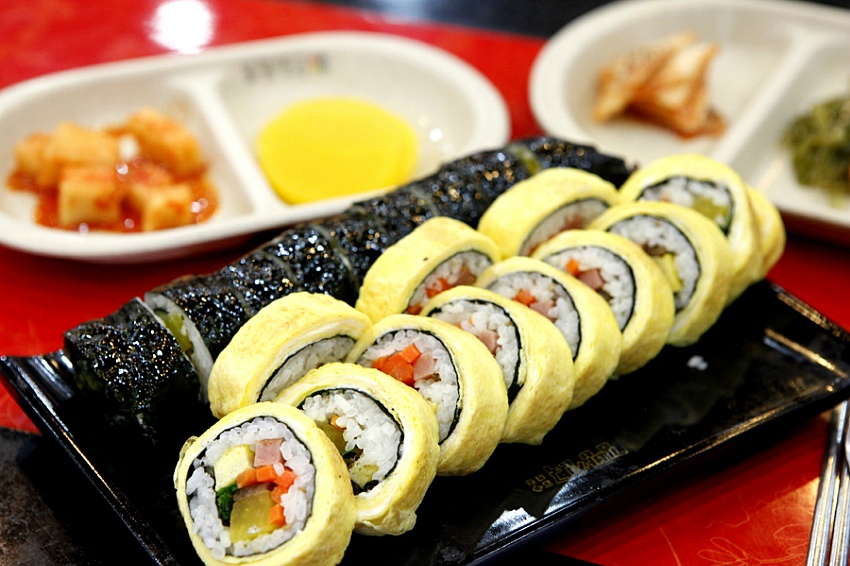 In this picture we have a regular kimbap, normally called 원조김밥 and next to it we have 계란말이김밥, which is a regular kimbap which is then rolled and cooked in a layer of egg. A must-try! Also make sure to try 참치 (tuna), 소고기 (beef) and 치즈 (cheese) kimbaps!

Below the kimbaps, we have a section for types of 덮밥. The 덮 part means ‘to cover’ and again we have 밥, which is rice. These are all rice dishes covered with different toppings, such as 카레 (curry), 제육 (spicy pork) and 불고기 (marinated beef). Next we have 한식. This is just a general term for Korean food. This section contains must try foods such as 비빔밥 (Bibimbap) to different kinds of soup dishes, like 갈비탕 (beef rib soup) and 육개장 (spicy beef soup).

Bibimbap combines 비빔 (mixed) + 밥 so literally means ‘mixed rice’ and it’s now probably as well known as 김치 (pickled cabbage). Do you like kimchi? There are some great foods you can make from kimchi I will mention in the next section.

Time for some 찌개. This is one of those standard staple meals that every Korean knows how to cook. 찌개 is normally translated to stew, soup or hot-pot, but it is basically something that has been stewed slowly to bring out the intense flavours of the broth.

The simplest form is 김치찌개 (kimchi soup). Let me give you my quick recipe!

Other 찌개s you must try are 된장찌개 (soy-bean stew), 순두부찌개 (soft tofu soup) and 부대찌개, often known as army stew. (It’s basically left over bits of everything, kimchi, ramen, spam, sausage, veg, ricecakes… all in one hot-pot!).

Then we come to 분식. I have to say, this may well be one of my favourite sections. 분식  originally comes from 분 (flour-based) + 식 (food). These days, this generally relates to street food like 국수 (noodles) and 떡볶이 (spicy rice cakes), as well as 라면 (ramen) and 김밥 etc. You have to visit any of the street stalls in Seoul to really get a taste of true Korean 분식.

떡볶이, 튀김 (assorted fried prawns/ veg etc.) and 순대 (pigs intestines) are the go-to choices  when you find a stall. Have a mix of each, together with a stick of 오뎅 (fish cake; the native Korean word is 어묵) and a cup of 오뎅국물 (water that has been flavoured by the fish cake). So good!

We now have a section for 국류 which are simply soups. Specifically here, we have 해장국. This is a funny name for a soup, because it’s called a hangover soup. Koreans feel the need to have something spicy (얼큰하다) and liquidy after a night of drinking. There are other alternatives like 라면 and 짬뽕 (a spicy seafood soup), but why not have the 국 made specially for your 해장!

There are other types of 국 that I really like, such as 떡국 (rice cake soup) and 미역국 (seaweed soup), but although you can eat these soups any day of the year, they actually have their own special days when they are meant to be eaten. 떡국 is always eaten on 설날 (New Year’s Day in the Lunar calendar, but it is often eaten on Jan 1st too!) and 미역국 is normally eaten on someone’s birthday.

Next we have 면, which is noodles! Two 면s you have to try are: 짜장면 – noodles covered in a special black bean sauce. This is the most popular Korean-style Chinese food that you will find. Have this will some deep fried 만두 (dumplings) and 탕수육 (similar to sweet and sour pork).

냉면 – cold noodles. Perfect on a hot summer’s day, but you have 2 choices when it comes to 냉면. 물냉면 is noodles served in a cool broth. 비빔냉면 is the same noodles, with much less of the broth, but lots of chilli sauce. The choice is yours! What would you choose?

Finally we come to the 볶음밥 and 돈까스 sections. 볶음밥 is fried rice, and the most common one is 김치볶음밥. Other popular styles are 새우 (shrimp) and 소고기 (beef).  돈까스, as I mentioned earlier, is a deep fried pork cutlet. I would say the special 돈까스 you have to try is 치즈돈까스 (a pork cultlet with melted cheese inside!)

We finally got through the menu! There’s so much to choose from, but of course, although this menu gives a great selection of what Korean food has to offer, there is so much more to explore and try! Maybe you would like to try 닭발 (chicken feet) or experience live squid (산낚지), there is a specific restaurant for everything.

I hope you enjoyed this lesson and I hope you’ll now be more confident when reading a menu and ordering food in Korean! Till next week! 안녕 ^^