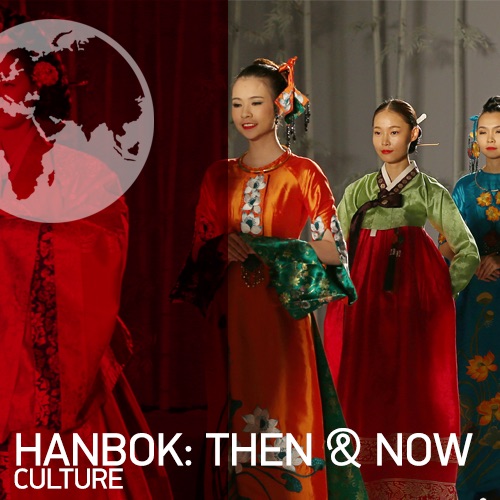 [Culture] Hanbok – then and now

Arrive at Seoul’s Incheon airport and, while still groggily checking you have filled out all the customs forms, you’ll most likely be greeted by some cheery airport staff in bright-coloured satiny wide dresses. For many, it’s the first time to see Korea’s traditional clothing, known as hanbok, up close. It makes one heck of an entrance.

You might think hanbok is an old-fashioned symbol of Korea, but last year Vogue reported on a modern comeback of the hanbok design and material, being repurposed onto the high street. Let’s take a look at hanbok then, and now.

If you love watching historical K-drama, of course hanbok is a familiar sight. It’s been around for over 1,600 years, developed from a style of clothing worn by ancient northern nomadic tribes.

While the basic male hanbok is a button jacket and paji (trousers), the female hanbok has a short-style jacket, and long skirt. In both cases the jacket is called jeogori. For women, it has long, wide sleeves, and doesn’t fit down to the waist, but sits more on the chest to just under where a bra would end. The wide skirt is called chima. As you might imagine, each tiny part of hanbok has a name too. Just take a look here. When wearing hanbok, women’s hair might be tied up neatly with a binyeo. traditional hairpin, or an ayam, a decorated headband that wraps around the forehead.

Many hanbok materials have been (and still are) dyed and embroidered by hand. In the past, designs were sewn onto the hanbok to represent the social ranking of the wearer. For example, the king wore a dragon and the queen a phoenix. The military symbol was a tiger, and civil officials wore crane designs.

Hanbok colours are designed in line with a Korean colour theory known as obangsaek (five traditional colours). The colours of blue, red, yellow, white and black represent five directions and five elements that are essential for harmony. This colour theory also translates into other areas of Korean culture, such as cooking.

The straight and curved lines of the hanbok, cut much wider than the average body, are thought to flatter the body regardless of how skinny or curvy you might be underneath. Watch any woman walking in one, or try it yourself, and you’ll soon see how the skirt swishes around gracefully. The hanbok affords, and seems to beg for, a lot of freedom of movement.

These days full hanbok is reserved for special occasion wear for ceremonies and parties; you’re not likely to see many of them out on the streets of Seoul on an average day. But there is an official ‘hanbok day’ on October 25. Hanbok fashion shows and events are sometimes held on this day.

If you want to buy a hanbok in Korea, prices start at around 150,000 KRW and can escalate depending on the quality of material and embroidery. Doosan Tower in Dongdaemun Market is the best place to check them out. Hanboks are made to order, so you need a few weeks to get one made. A cheaper, and more practical version, is known as Gaeryang hanbok. These ready-made outfits are altered hanbok that can be worn in more daily life, and start at around 70,000 KRW. Insadong is a good place to head for these. Or, make like the girls in the Vogue article (here) and just pick up some material to take home and make your own unique clothes.

The Korean tourist board also has some good links to low-priced/free hanbok experiences for tourists right here.