Trending
You are at:Home»Reviews»Album»[Album Review] Monsta X Take.2: We Are Here

A Monbebe’s take on Monsta X’s latest album, Take.2: We Are Here. 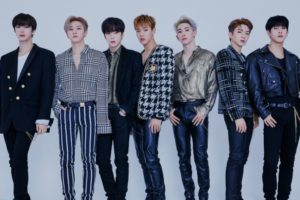 Monsta X returned on Monday (Feb 18) with another full album, Take.2: We Are Here. Being the group’s first comeback since their win on a major network show (KBS), this die-hard Monbebe has wondered whether this album will prove to be just as successful.

More Intense than Shoot Out?

The album opens with the minute-long Intro: We Are Here. One could conclude that it is a fitting title, considering the group’s long-awaited attempts to crack the Korean charts. However, this introduction is only a build up to the album’s true beginning, Alligator.
A dramatic, yet catchy title track, Monsta X prove that they’re only getting better. If you thought Shoot Out was intense, then prepare to be blown away. The fast-paced chorus sounds almost mechanical against the dance heavy instrumental. And similar to Dramarama, the track responsible for the group’s first music show win, try to get ‘alli-alli-alli-alligator‘ out of your head. The highlight of the track, though, I’d say, is the rap before the final chorus. Joohoney (Jooheon) and I.M. pull off the back-and-forth rap like it’s nothing, and they truly are some of the best rappers in the Kpop industry.
The next track, Ghost, is somewhat haunting, and although the sung elements remind me of VIXX, the rap elements are true to the group’s colour. Dream-like elements appear to have become a Monsta X staple, with Lost in the Dream and Myself being previous examples, and this track refuses to disappoint.

An Exploration of Genres

Throughout the album, Monsta X prove their versatility with a variety of tracks. Steve Aoki’s track, Play It Cool, is one example. The song breaks away from the group’s usual aggressiveness and displays tropical vibes. The Metro called it a “shimmering summery bop that’s quite unlike Monsta X”. If you pay more attention to the group’s title tracks, then yes, the song sounds like it would suit SHINee. But, as a Monbebe, I find the song brings out the group’s off-stage personas. When producing the track, it is clear that Aoki understood Monsta X’s ability to deliver a great performance.

The collaboration becomes the perfect gateway into the lightest song of the album. No Reason is composed by Wonho, the mastermind behind From Zero, If Only and 널하다 (I Do Love You). The soft pop song is one that allows Minhyuk to shine, but unfortunately pushes the rappers to the side. It would have been better to have the raps introduced earlier. Saying this, it is a shame that this is the only self-composed track, as the highlight of the previous album were songs composed by Wonho, Joohoney and I.M.

Following this, are Give Me Dat and Turbulence. Both tracks feel familiar at first listen, as they contain the heavy percussions and powerful tones from the group’s rookie days. But neither reaches their full potential. The same goes for Stealer, where the highlight of the song is I.M’s low-tone rap. The heavy beats of Rodeo, however, work well against its western movie intro. It will certainly be a favourite at concerts, having been dubbed as an upgraded Fallin’.

This brings the album to an abrupt transition with Party Time. Individually, the soft RnB track is smooth and refreshing. But as part of the album, its placement is questionable. I wonder if Rodeo or Stealer would be better suited as its climax.

Take.2: We Are Here is, overall, an exploration of the group’s past, present, and future. Although some tracks needed a few adjustments, there is no doubt that Monsta X are versatile artists. It’s an album that seems fitting for the long-awaited success, telling the world that they, Monsta X, are here. And they don’t plan to leave any time soon.

If you haven’t bought the album, you can find it on iTunes. Otherwise, you can listen to it on Spotify.