Trending
You are at:Home»Original Content»Guest Article»[Guest Article] YG Entertainment’s Guide on How NOT to Support Your Idols

You have probably seen the many stories circulating the K-Pop news circuit in January reporting the fact that BIGBANG maknae Seungri was left without stylists, a live band and only had two back up dancers for the Hong Kong stop of his ‘The Great Seungri’ Tour. It has been reported that his stylist staff had instead been dedicated to Seungri’s labelmates BLACKPINK. Many fans were left outraged at the unfair treatment of the idol.

It seemed that YG was feeling the tension in the air, as he was then quick to shoot down Seungri’s suggestion that he deletes any complaints he receives from his idols. Seungri conceded that he was simply trying to be funny on a programme and took things a bit too far. However, what irked me most was how YG went about proving his innocence – by sharing a screenshot of his and Seungri’s text conversation. I am sure he did this with Seungri’s consent, but I still felt it was a cheap move to share a private conversation with the world to prove your point.  Personally, I think that these things should remain between those involved and a statement alone would suffice. 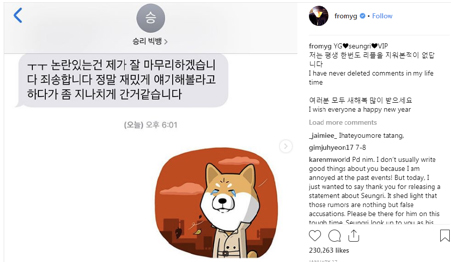 Despite my disappointment in YG’s behaviour though, I am reminded that he has quite a history of throwing his idols under the bus. Another time that comes to mind was how YG handled the departure of Nam Tae Hyun from WINNER back in 2016. There was absolutely no tact used in expressing the reason for his departure, citing his mental health issues and not covering much else:

“YG and the other members have put Taehyun’s mental health as the main priority and decided to wait for his recovery. However, due to the fact that the mental issue was one that has been present ever since his childhood, it is impossible to predict when he will recover and when he will be able to return to activities.”
Source

Perhaps I am being over-sensitive, but it seemed to me that they were blaming Nam Tae Hyun. I understand that his mental ill health was likely the cause for his departure, but does it really need to be put so bluntly? One could have cited the immense stress of idol life and fame, or simply phrased it as the idol not finding it the ‘right fit for him’, perhaps. I just feel it could have been handled a lot better than it was. Interestingly, Tae Hyun – now a member of the band South Club, has since gone into a bit more detail about why he was not happy at YGE and somewhat set the record straight.

In 2014, 2NE1 member Park Bom was found to be receiving medication that contained amphetamine from her family in the USA. YG defended Bom, stating that she was not receiving preferential treatment and explaining that these drugs are legal in America, but not in South Korea. After this though, he seemingly resumed a radio silence and this continued up to 2NE1’s disbandment in 2016.

As for SE7EN’s massage parlour controversy and TOP’s marijuana smoking case – I also think YG could have done a little more to cool the fires that burned as a result. Both the idols and the company should step forward and admit what has happened, and work together to resolve it. However, as is unfortunately so customary – radio silence prevailed once more. Even more recently, SECHSKIES’ Kang Sung Hoon’s controversy earned equal silence from YG, ending simply in a ‘mutual agreement’ for his departure from the group and label.

Now, you could argue that idols are responsible for their own business and that, if they make bad choices, they should be the ones to pay for it. I completely agree!

What I dislike though, is the mishandling of these situations. YG seems to revel in the success his idols bring him, but as soon as they do something wrong or make a mistake, he does not supply them with a safety net. I believe that the relationship between an idol and their entertainment company should be reciprocal – they should support each other.

Let me be clear, that is not to say that they should condone all behaviours, but rather, not be so eager to throw each other to the wolves as soon as times get tough.

Holly Smith is the former Editor of UnitedKpop. Holly works for the NHS and Rivers LPC, a small charity working to empower women and help those who may need assistance in any number of ways. Holly still regularly writes on her personal blog Origoshi!