Pristin, a 10 member group under Pledis, could’ve been one of the biggest Korean girl groups of this generation. Winning numerous awards and the title of ‘monster rookies’, Pristin were rising to the top. Yet they recently announced their disbandment, with 7 members choosing to leave Pledis altogether. To many, this didn’t come as a surprise – after months of no activity and Pledis’ track record with girl groups, some would say Pristin was doomed from the beginning. They lasted a measly 2 years and in that time they released only 11 songs; by Korean standards, it wasn’t enough for a group with such huge potential.

So, what went wrong?

Pledis initially had high hopes for Pristin. Riding on the coat-tails of members Nayoung and Kyulkyung’s success in IOI, Pledis wanted to capitalise on their popularity. After all, they had the leader of one of the most popular groups in Korea and one of the visuals, whose Chinese heritage opened the possibility of overseas promotions. They debuted Pristin quickly after IOI’s disbandment in order to keep the momentum with a bright concept and catchy title song, ‘Wee Woo.’ Pledis had been promoting the other 5 members who had also appeared on Produce 101 as ‘Pledis Girlz’ alongside 3 new members; Kyla, Sungyeon and Yehana. This combined exposure was sure to be a hit domestically with seven out of ten members with their own fanbases – at least, Pledis assumed so.

‘Wee Woo’ received mixed reviews upon its release. Pledis’ decision to make ‘Wee Woo’ the title song was their first mistake. Whilst it is an admittedly catchy song, it didn’t showcase the girls’ talent the way it should have. The choreography was frustratingly simple when they were all capable of so much more, the lyrics held little substance and the rappers of the group got hardly any screen time or lines. Pledis could have struck gold if they decided to debut Pristin with an edgier concept, seen in ‘Black Widow.’ The dark and confident theme of ‘Black Widow’ is relatively unexplored in Kpop amongst girl groups, with cute concepts favoured domestically. But with the massive exposure they had, Pristin could have broken the mould and carved their name into Kpop history. ‘Black Widow’s choreography is more impressive when compared to ‘Wee Woo’s and it shows the versatility of the group. ‘We Like’, their second lead single from ‘Schxxl Out’ was marginally better as it was now clear who the main vocal was. But it faced many of the same issues that ‘Wee Woo’ did and earned them a reputation for using sounds as their chorus (Wee Woo and Du-du.) Pledis’ direction for the group was too safe but Pristin could and should have broken so many barriers.

But arguably the biggest reason for Pristin’s demise? Pledis. From their mismanagement of the group to their failure to protect them from scandal, the group’s future was always precarious. Their previous girl group, ‘After School’, hasn’t had a comeback in 5 years, yet they haven’t officially disbanded. Several members have since re-debuted in subunits (Orange Caramel and A.S. Red & Blue) and on survival shows – even Produce 101 which Pristin members starred on. Pristin’s activity flatlined after their two comebacks in their debut year with no explanation from Pledis or the members themselves. All the fans got was Pristin V – it seemed as if history was repeating itself. ‘Get it’ was true to Pristin’s sound, but by this point public interest in them was fading.

Their fanbase dwindling, they were no longer viable to Pledis, who saw this as a failure and simply gave up on them. 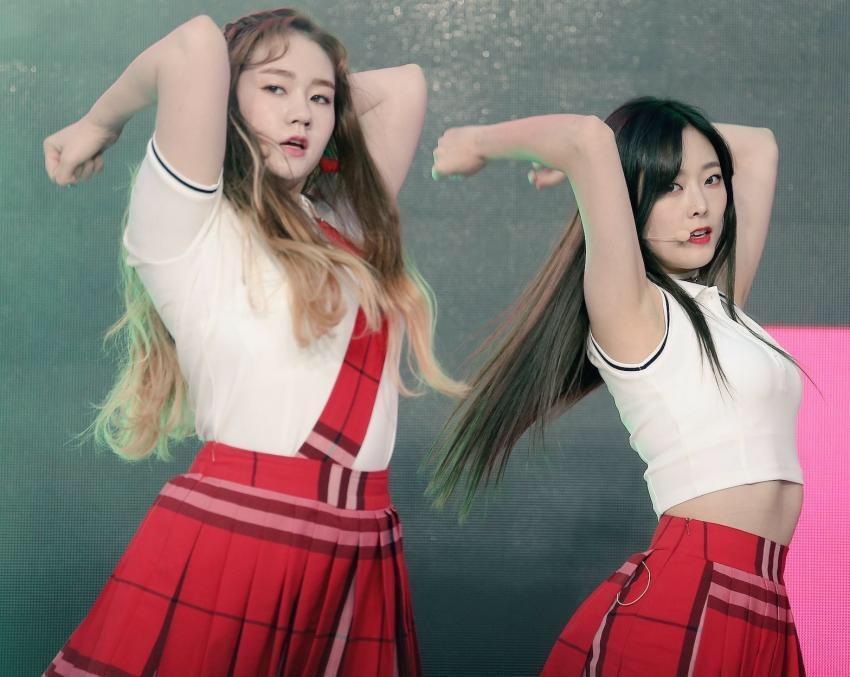 Pledis’ negligence reared its head when members were wrapped up in scandal. They failed to speak up when they should have – Kyla was mercilessly fat-shamed by neitzens from the moment she debuted. Memes mocking her weight circulated, critics demanded she diet and she was ignored at fan meetings. Pledis’ response was to place her on an indefinite hiatus instead of addressing the situation. It was Pledis’ duty to shield her from the abuse she was receiving both online and offline. She was only 15 and her company enabled the bullying of a child. They could have easily issued a public statement threatening those who made malicious comments with lawsuits. Instead, they chose to sweep it under the carpet in the hopes that the issue would disappear. It didn’t and still hasn’t – Kyla is still being blamed by some for their disbandment.

Other members were embroiled in controversy too. Roa was blasted by neitzens when pictures of her ‘underage drinking’ surfaced. She was picked apart by both fans and neitzens for ‘acting inappropriately’ with older men, even though the pictures clearly showed her sitting on a chair rather than their laps. Kyulkyung was criticised for her Chinese promotions, but this time by Pristin fans. It was seen as her ‘choosing’ China over Korea and as a result she was shunned at fan meetings and live performances. Again, Pledis did nothing and the members were left to deal with the fallout.

It’s hard to justify Pledis’ complacency – Xiyeon had been in Pledis for 11 years just to debut and disband in 2 years. All of the girls had sacrificed years and precious time with their families in pursuit of the false dream Pledis sold them. At least now most of the members are free from Pledis and can choose their own paths. Fans will never forget Pristin and wish them the best of luck in whatever they choose to do.