Trending
You are at:Home»Events»Concert»[COVERAGE] NCT 127 in London 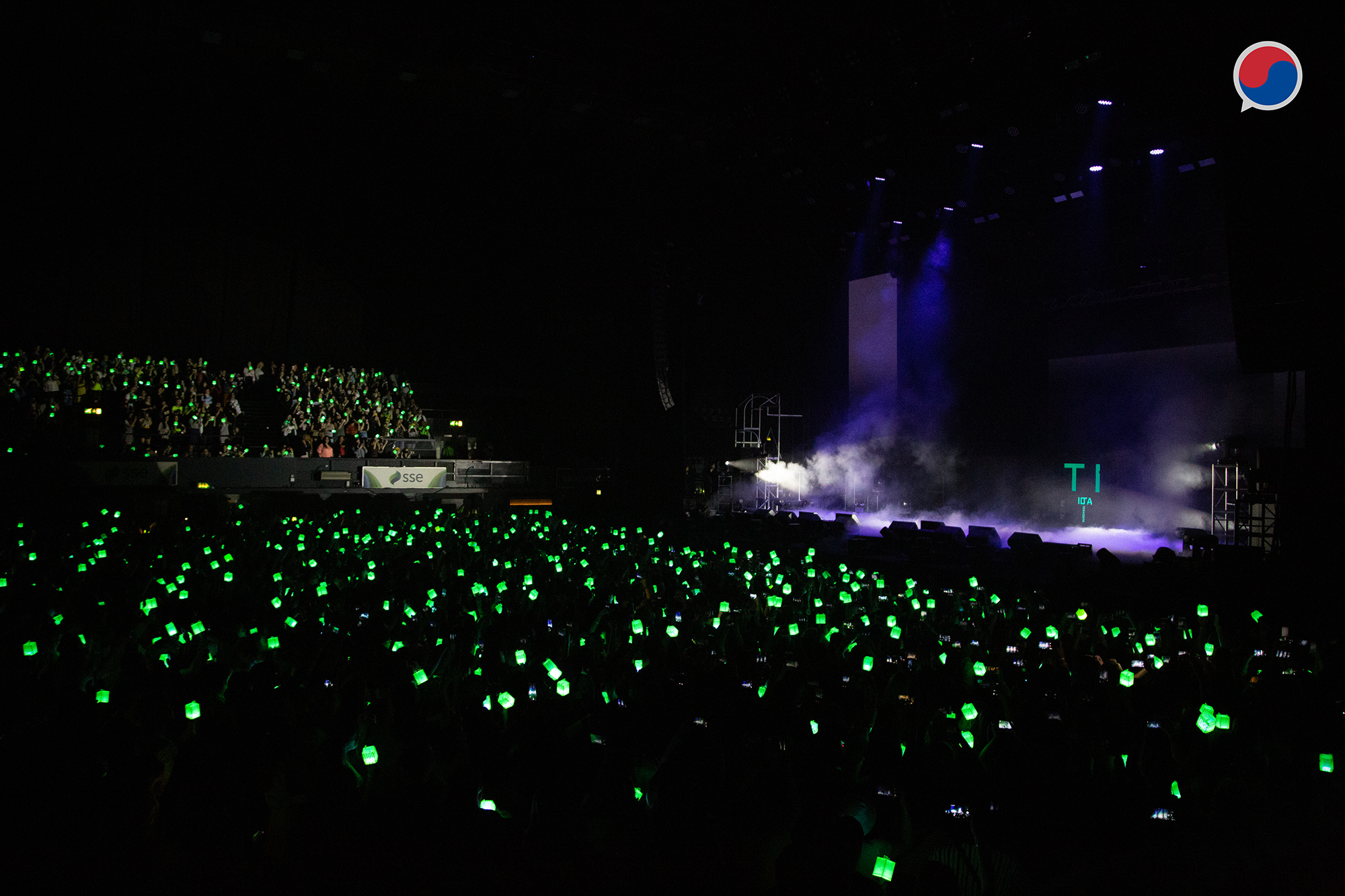 On the 7th of July 2019, Wembley was overrun by fans wearing lime green as they prepared themselves for NCT 127’s Neo City: The Origin London concert. The venue was alive with energy and noise as fans chatted amongst themselves and danced to the group’s songs. 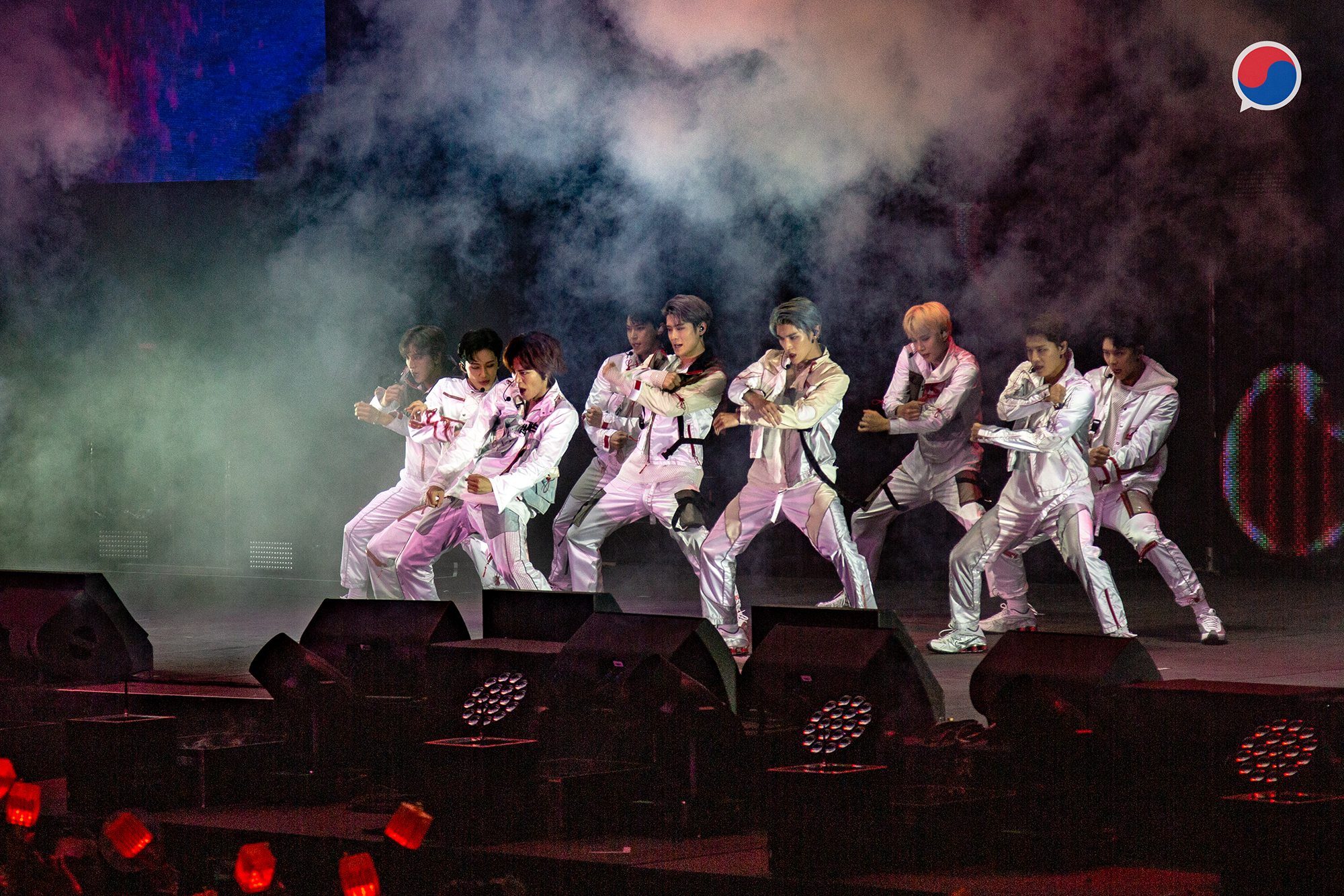 The queueing system for the concert was unsurprisingly disorganised. Some fans were left waiting for hours in a line as there was only one merch stall outside. Others were told by staff to run to the other side of the venue half an hour before the show was set to begin because they weren’t getting people in fast enough. 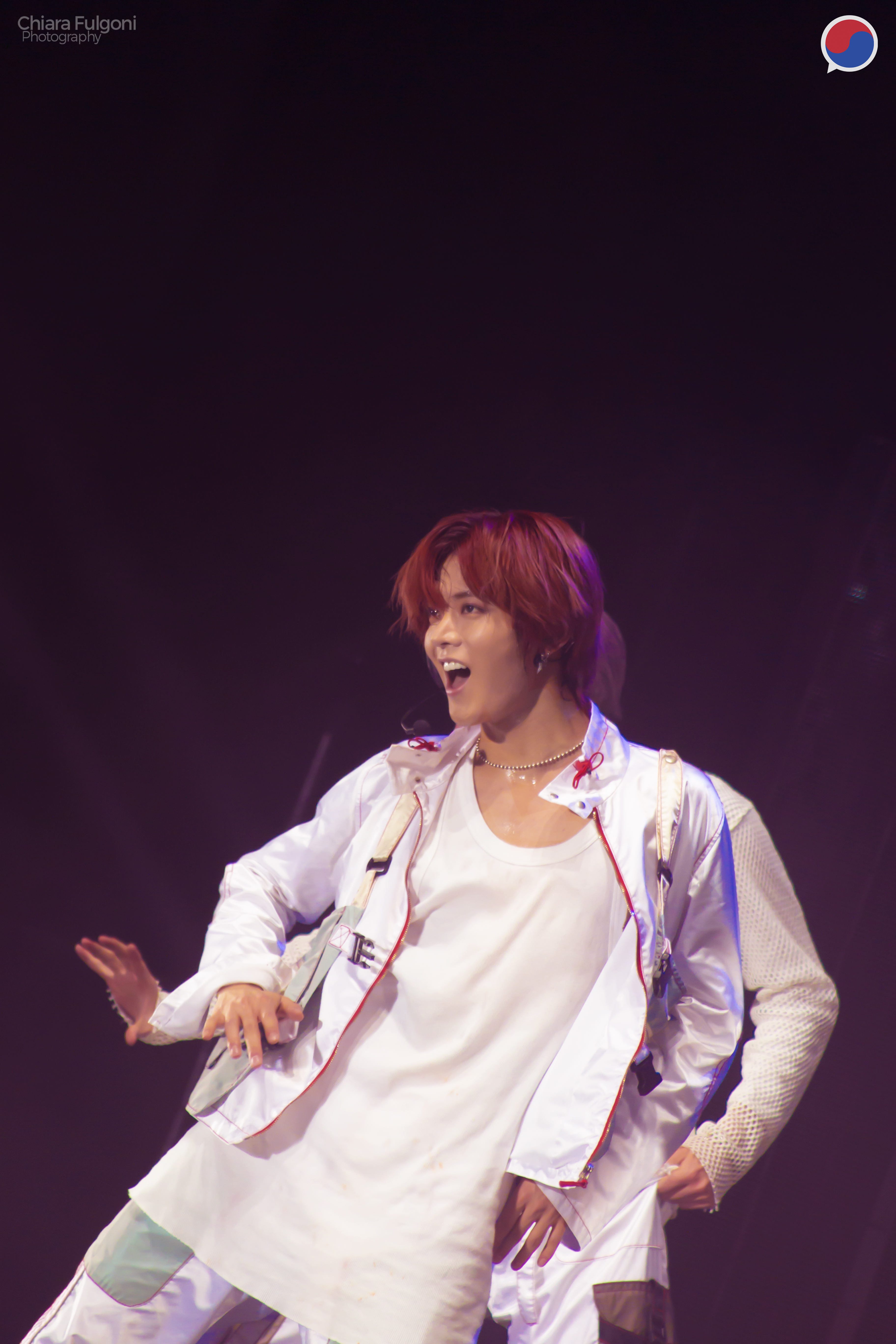 The fans kept their energy high despite the organisational hiccoughs, and the arena was vibrating with anticipation as they readied themselves for the concert.

NCT 127 debuted with seven members on 7th July 2016. The group have seen a few line-up changes over the year and had nine members for the London concert: Taeyong, Taeil, Johnny, Yuta, Doyoung, Jaehyun, Mark, Jungwoo and Haechan. As the concert was on their third anniversary, NCTzen’s from the UK had produced a banner for fans to hold up during ‘Jet Lag’ to celebrate. NCTzen’s also started singing ‘Happy Birthday’ to the group towards the end of the concert. 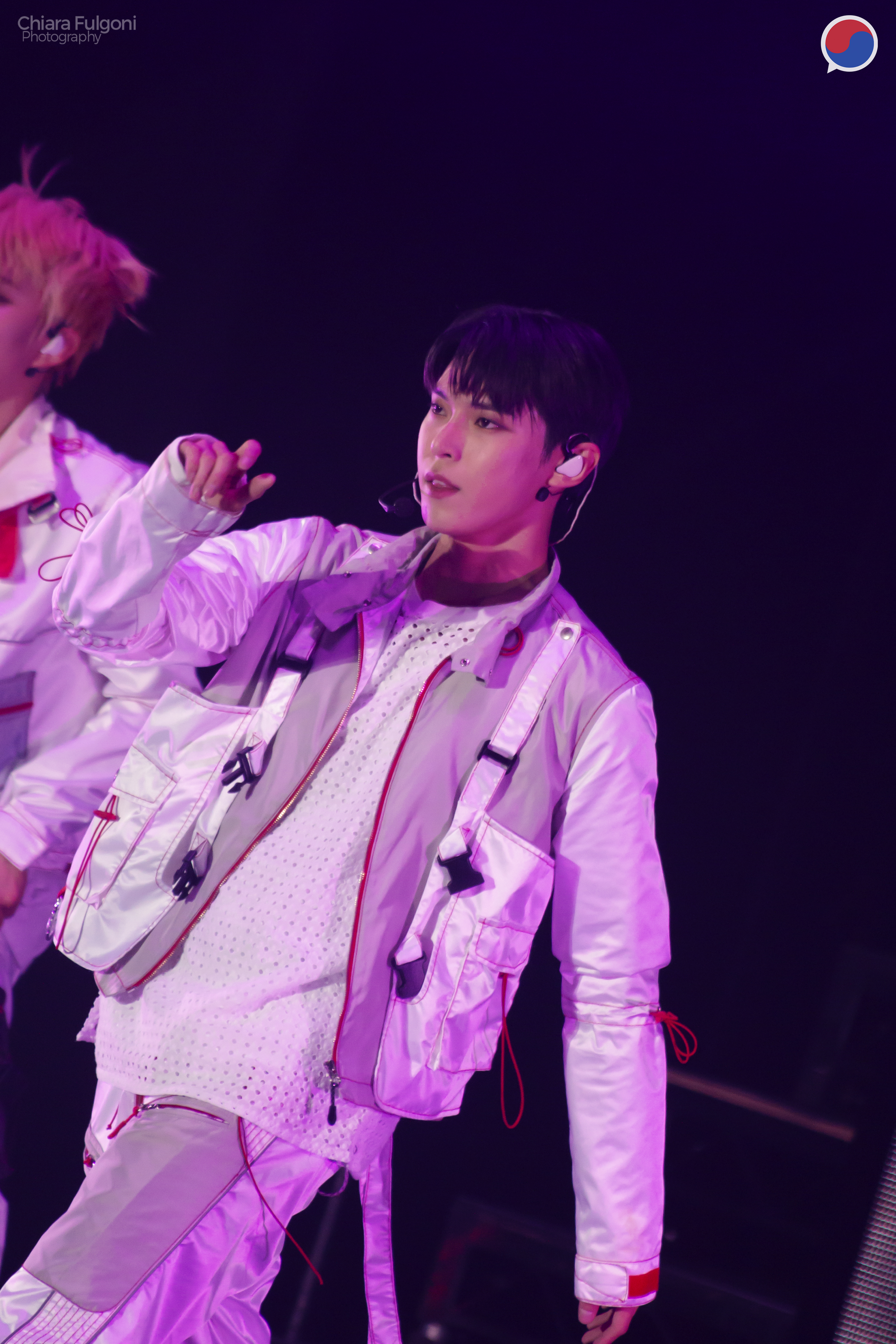 NCT 127 started the concert with the English version of their explosive title song ‘Cherry Bomb’. The sharp dance and deep music shook the arena as fans joined in with the infectious lyrics. It was a treat for the fans to witness their iconic leg-spreading dance at the end of the song. 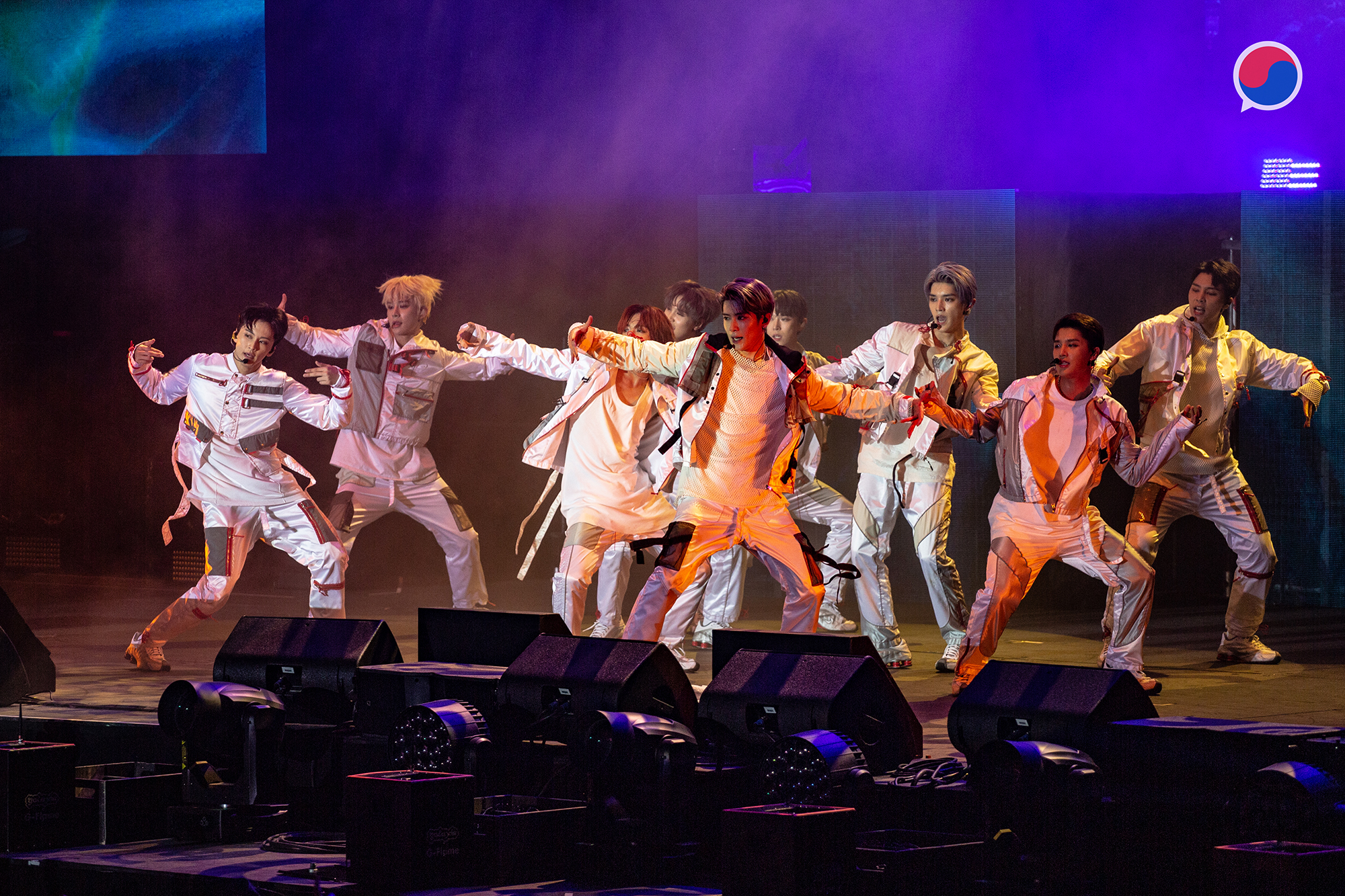 The group maintained the energy with by performing some more of their upbeat-but-gritty songs like ‘Limitless’ and ‘Chain’. It was a shame that only some of the members were on stage for the beginning of ‘Limitless’, rather than the whole group performing the songs exceptional dance. However, the stage had a raised podium towards the back where some of the members performed for the other songs. This was excellent staging as it allowed all of the audience to see clearly. It also meant they were able to appreciate each member’s impeccable dancing. 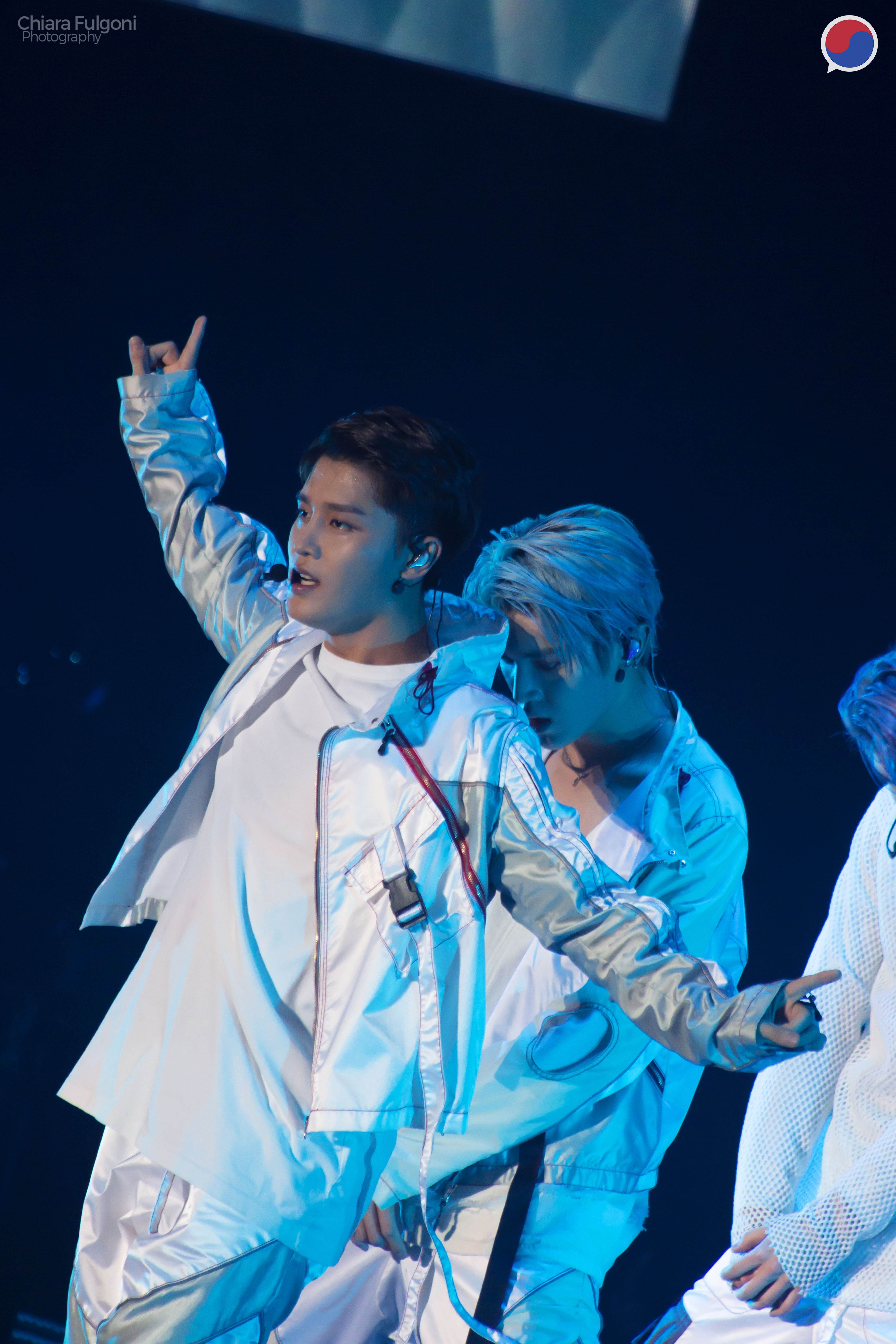 After these songs, NCT 127 took the time to welcome the audience and introduce themselves. It was a wonderful surprise that every member tried to speak in English throughout the concert. Though it was obvious that some of it was being read from a prompter (which is only to be expected as most of the members don’t speak fluent English), all of the fans really appreciated the effort. Their attempts at speaking English for the majority of the concert made the speaking segments far less tedious than if it were all being translated, and it allowed the concert to flow more smoothly. 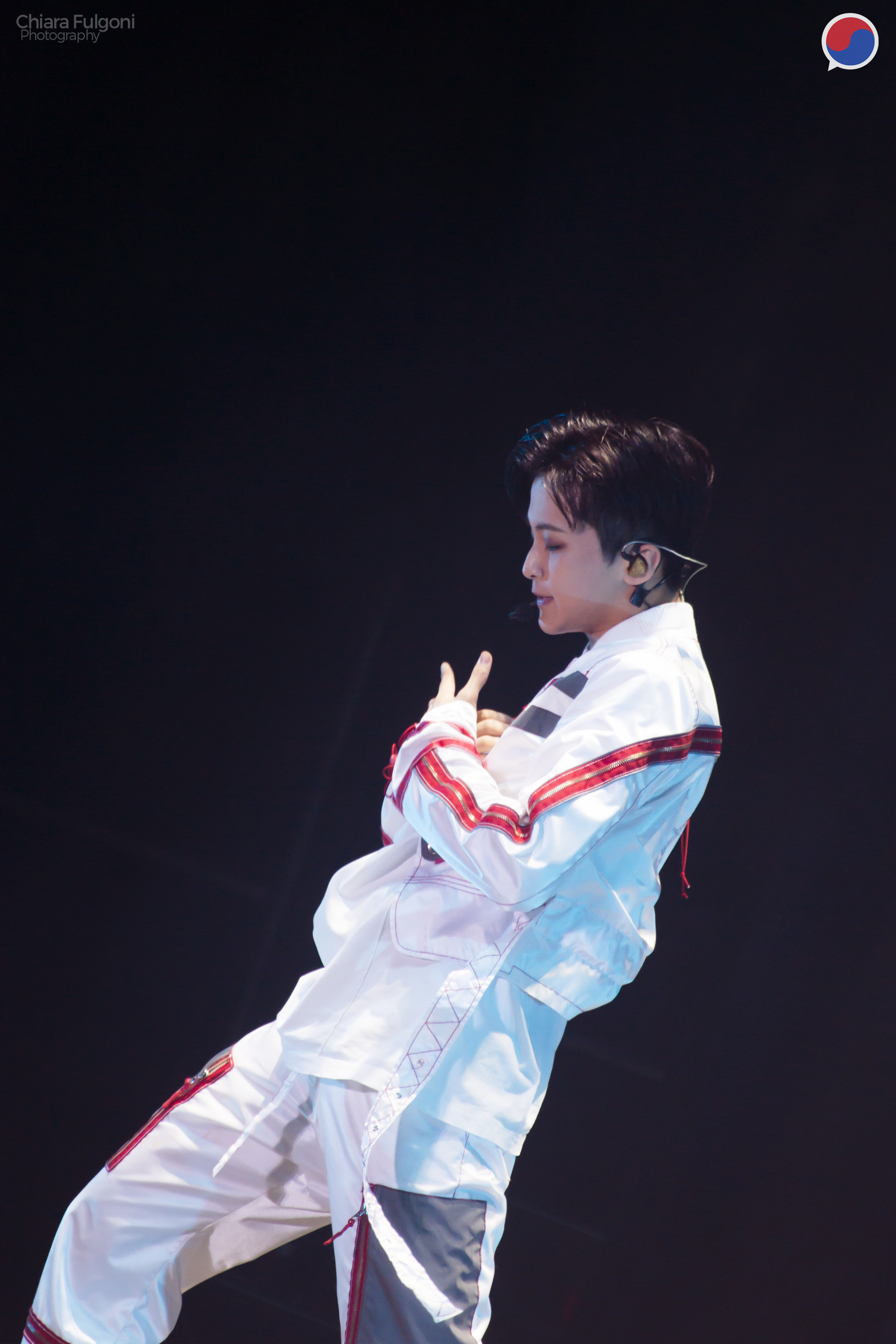 NCT 127 then moved onto some of their slower songs. Their performance of ‘Fly Away With Me’ was mesmerising. The song showed a completely different side to the group. It showcased their breath taking, crystal clear vocals. The delicate and expressive choreography allowed each member to shine. For a group that is known for their hard-hitting, fiery comebacks, it was refreshing to see them perform in such a fluid and majestic way. 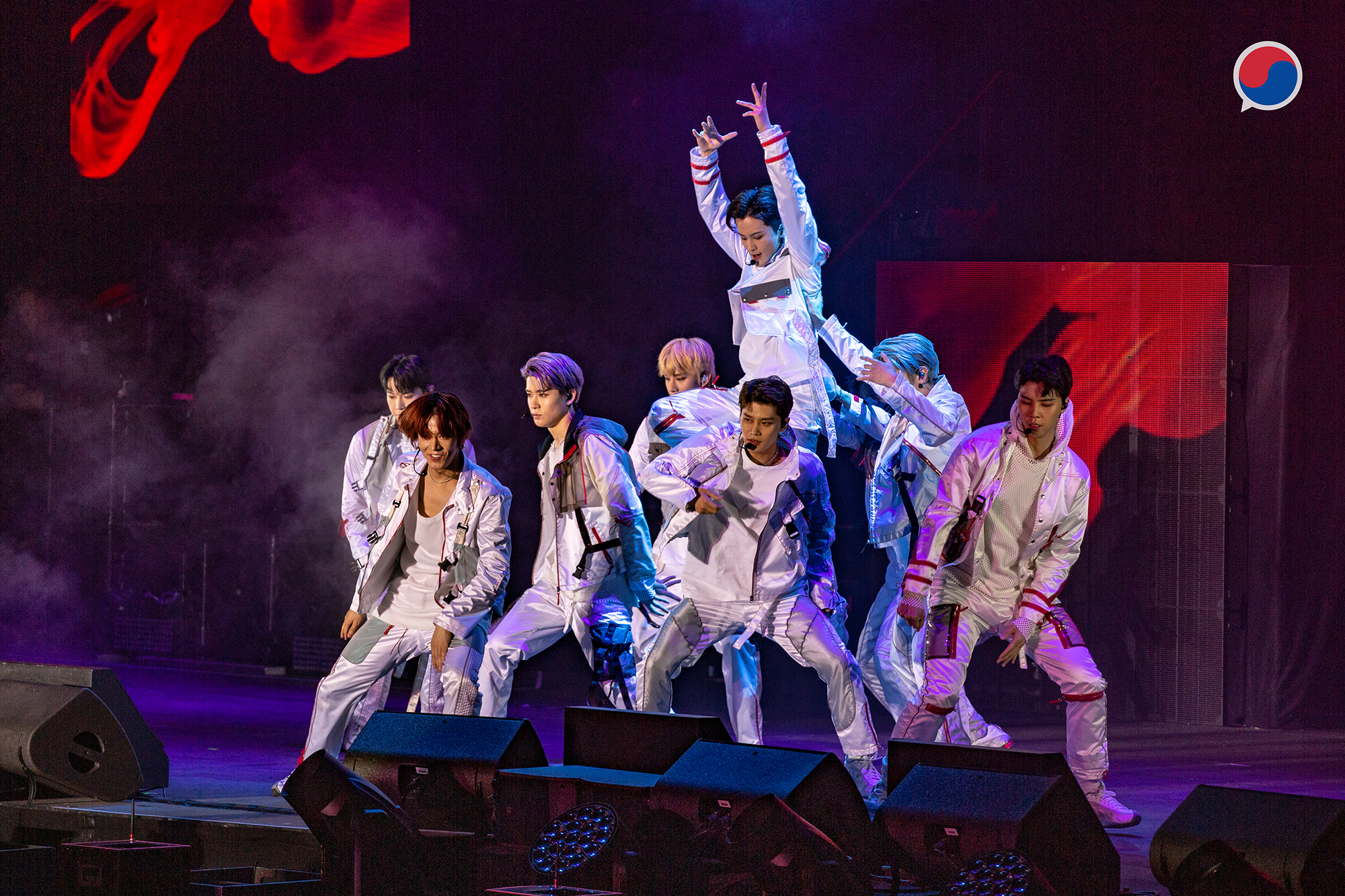 There was a small interval as NCT 127 got changed and staff set up stools and standing microphones on the stage for the next segment. The pared back staging during these songs made the concert feel very intimate, even though the arena was filled with thousands and thousands of NCTzen’s swinging their lightsticks from side to side. 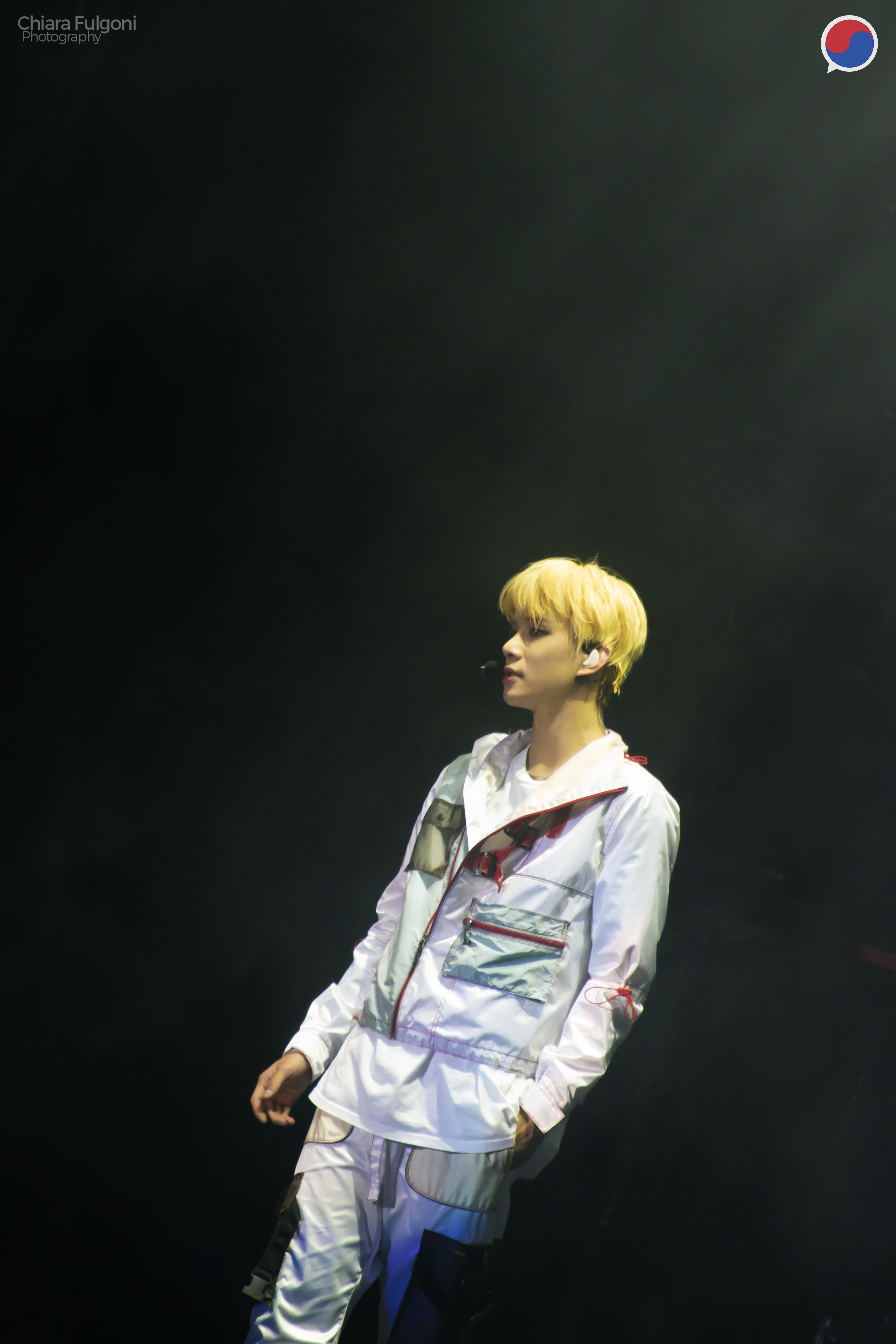 The whole group returned to the stage in suave, crimson suits to perform their hit ‘Regular’. The songs latin vibe made the audience dance along and raised the pace of the concert. As the group performed the English version of the song, the crowd were able to sing along. The venue was once again filled with thrilling energy from both the crowd and the performers. 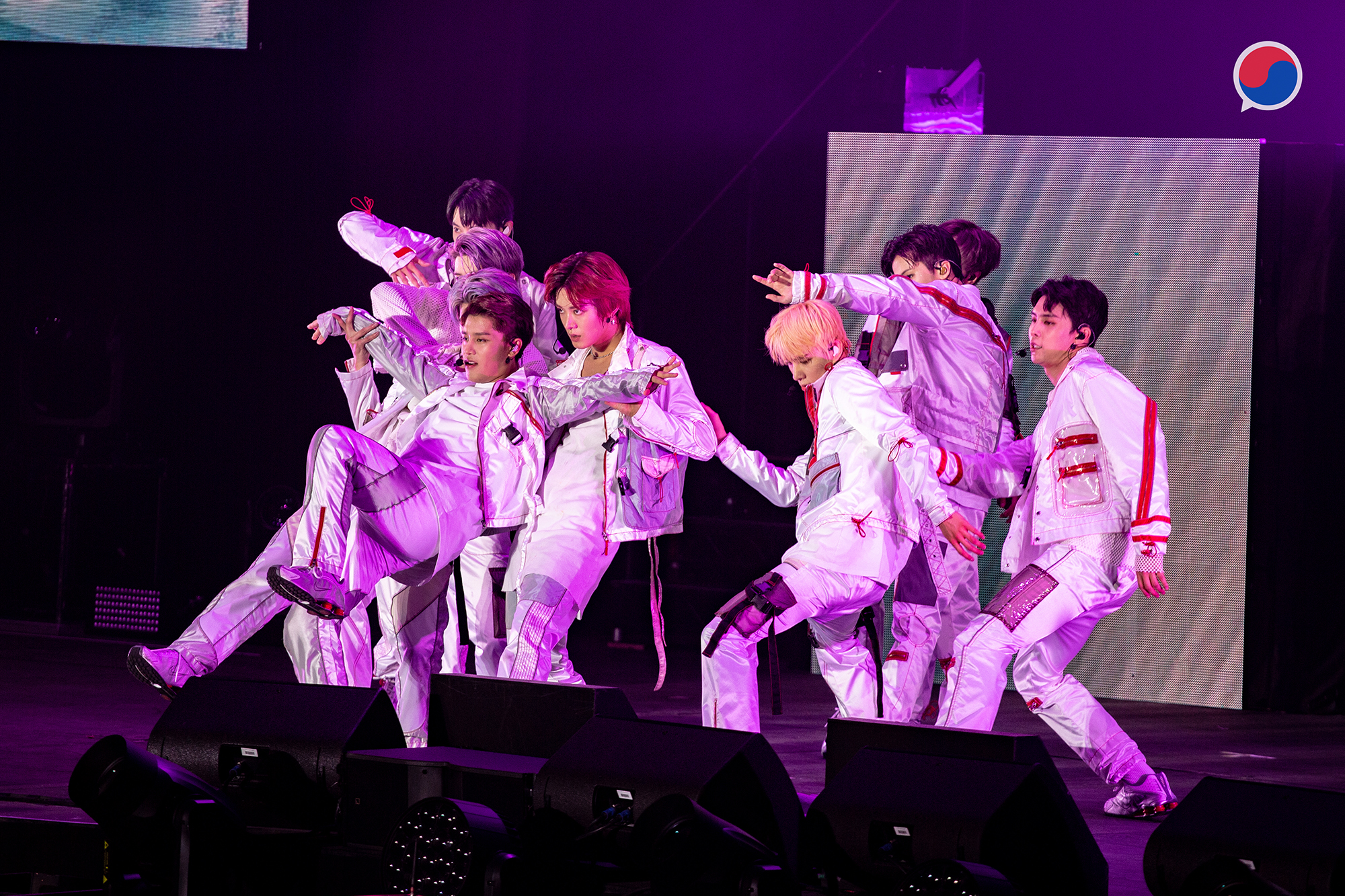 As NCT 127 prepared to perform some of their older album tracks, the landscape of the stage changed as an intricate metal climbing frame appeared from the sides. The group used the frame as a prop for their next few songs. They climbed up to perform on platforms at the top and they draped themselves over the rails. 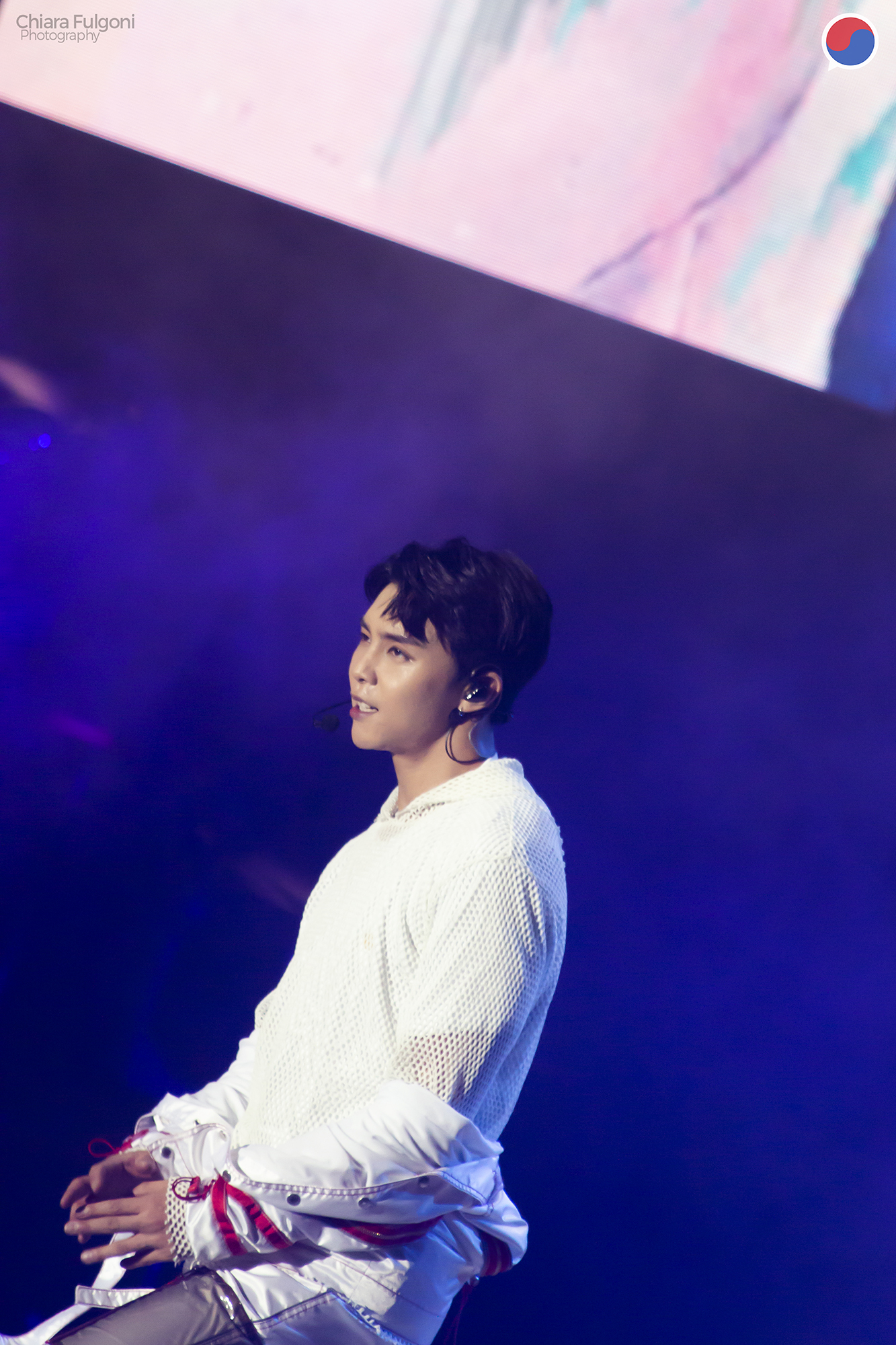 NCT 127 showed off their acting skills in an amusing VR that appeared on the screens while they went to change again. The VR showed four members who have miraculously travelled back in time and have to compete in a dance-off in order to get back to the present day. The members were decked out in classic 90s fashion which was very reminiscent of their Sunbaes H.O.T. Though the VR was quite long, the narrative and comedy kept the audience entertained as they cheered for their favourite member. 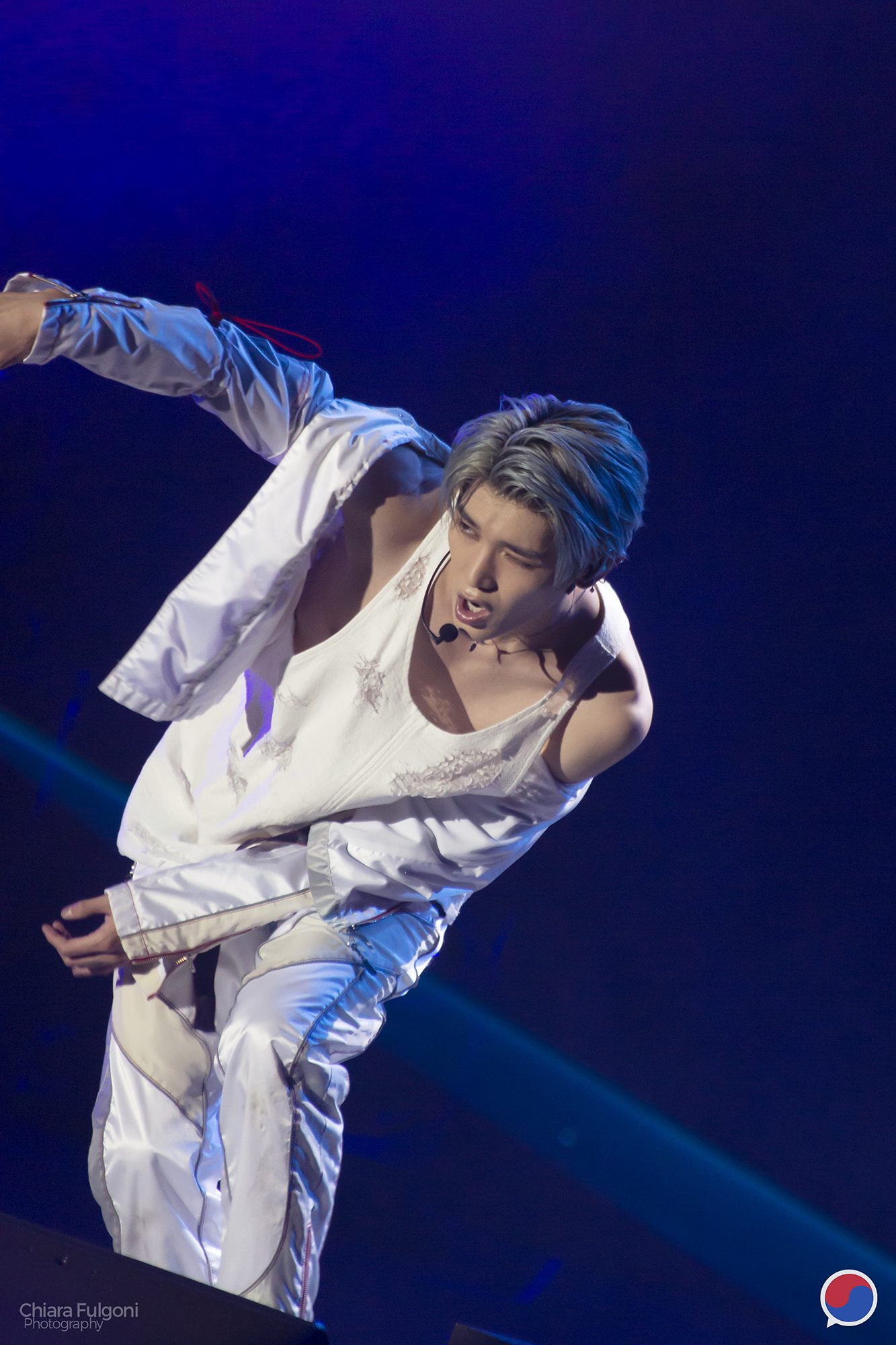 The crazy clothing continued as the group stepped back onto the stage in a clash of patterned clothing and bright colours. The costumes signalled the fun and cute section of the setlist and brought back memories of Kpop in 2010/2011. The members performed ‘Touch’ and ‘Good Thing’ with copious amounts of aegyo which made it impossible not to grin. The atmosphere in the room was lifted again and provided another contrast to NCT 127’s darker music. 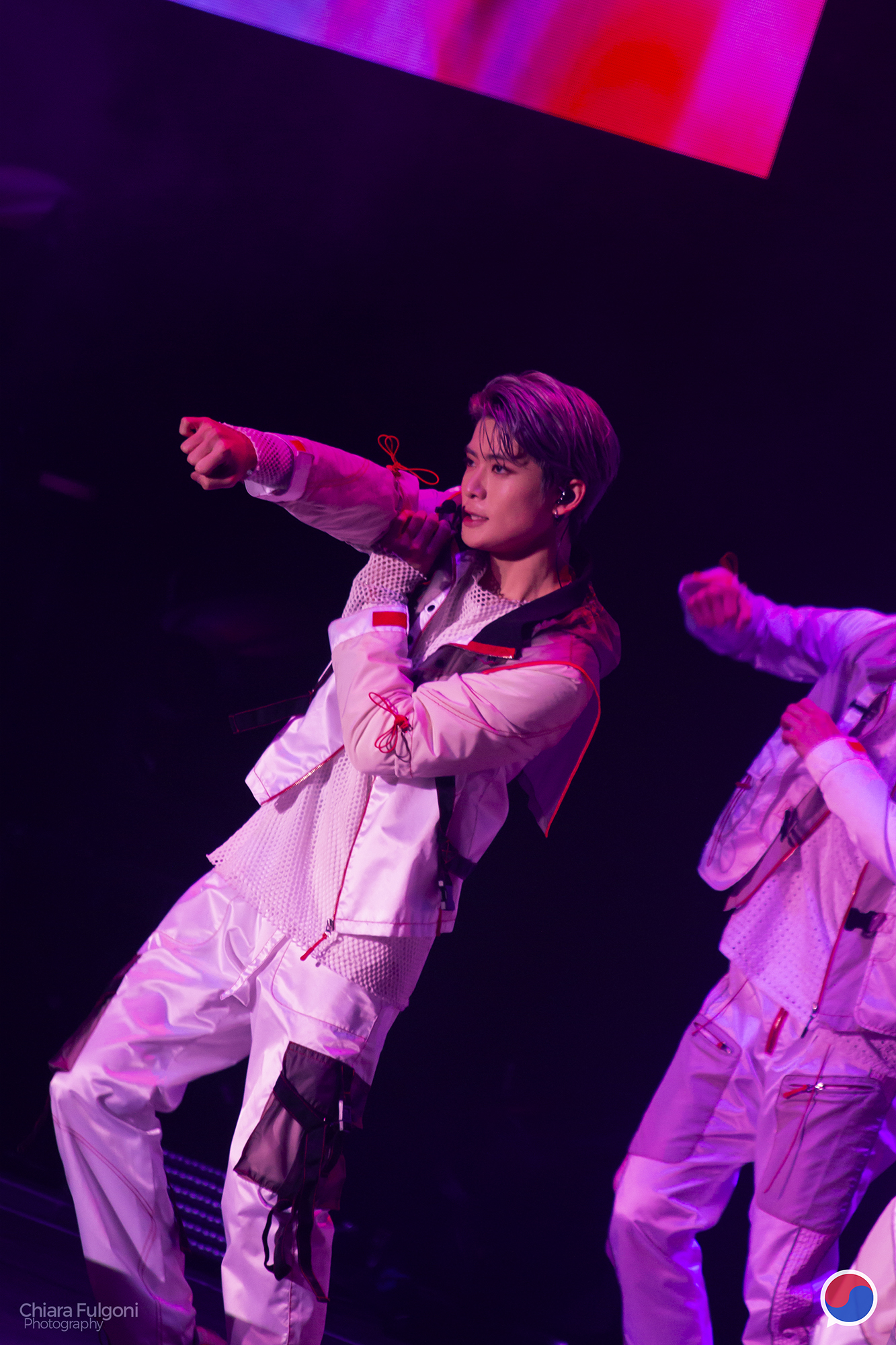 NCT 127 ended the main concert with their debut song ‘Fire Truck’. Though the song was originally released with only seven members, the choreography and line distribution had been reworked so all nine could perform it. The song was a spectacle as NCTzen’s Bluetooth-controlled lightsticks flashed a bright orange, and fire machines lit up at the front of the sage during the songs pivotal moments. 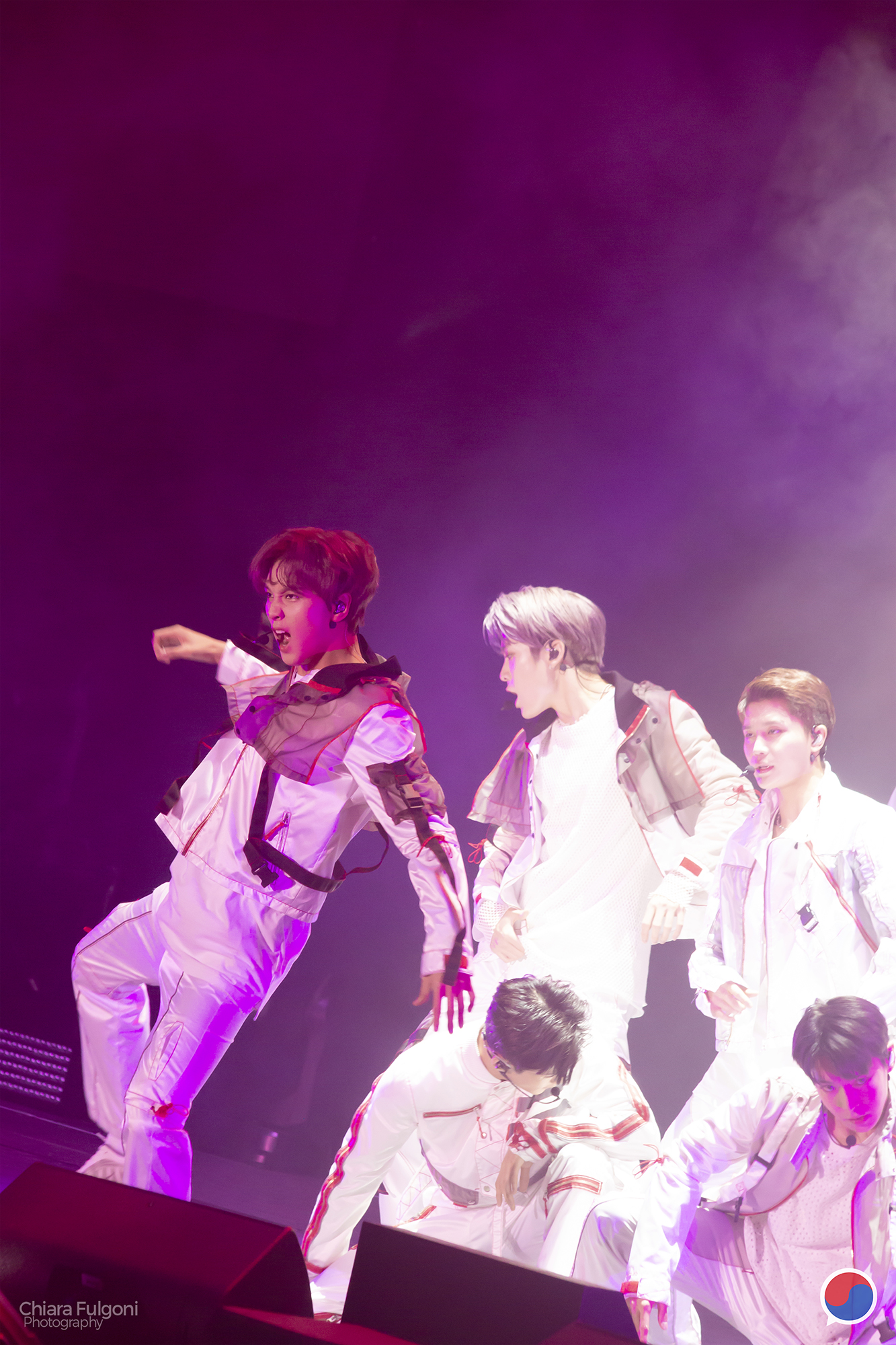 The group returned for an encore in dazzling white and silver suits that caught the light perfectly. They performed their most recent comeback ‘Superhuman’ with flawless energy and dancing. They finished the concert with ‘Summer 127’ and ‘0 Mile’. Johnny had said during the concert that seeing how free NCTzen’s were had made him feel the same way. It was inspirational to see how free the members were during these last two songs; with less choreographed dancing they were able to interact with fans and thoroughly enjoy their last few moments on stage in London. 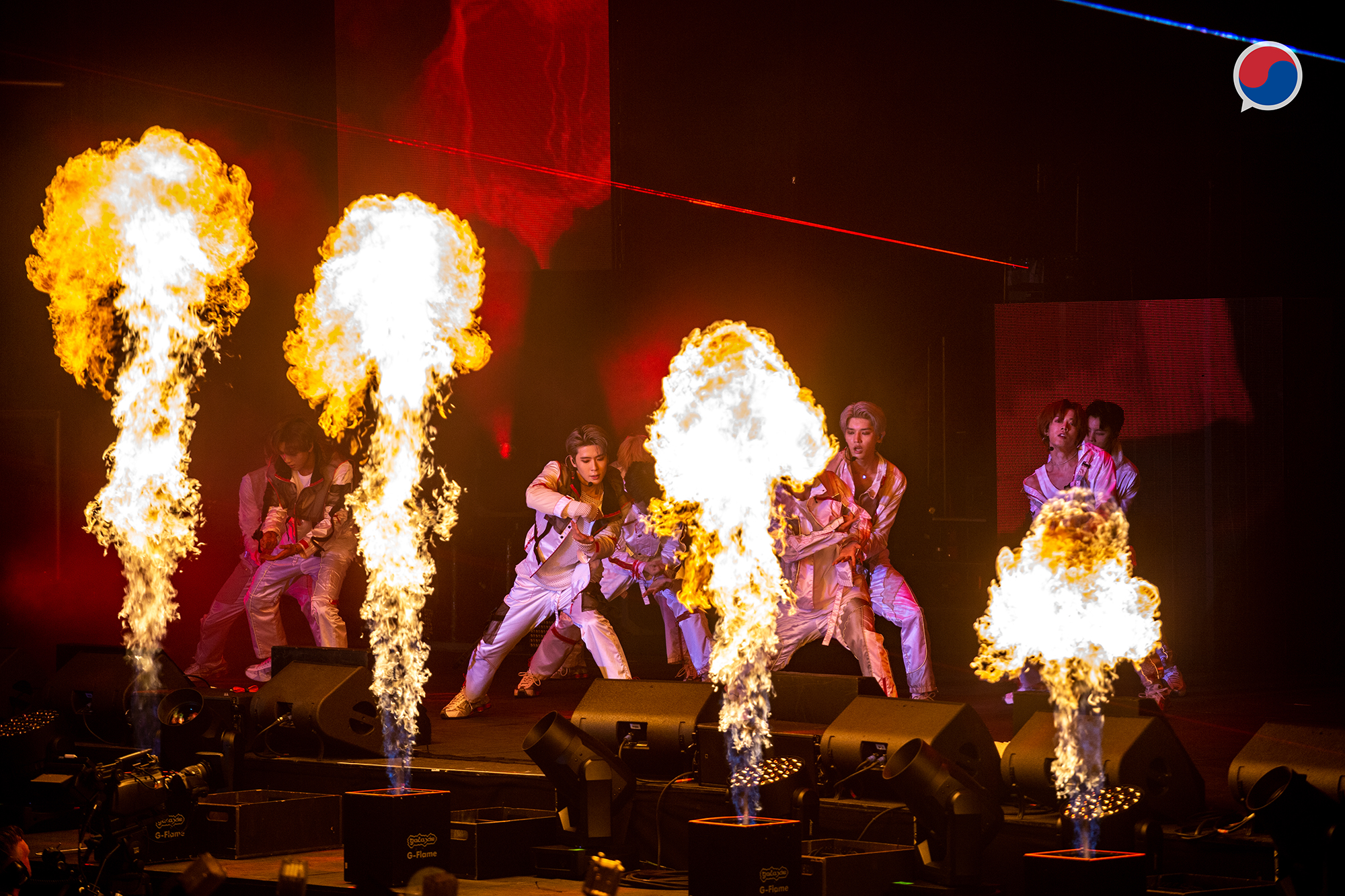