‘The Good Son’ by You-Jeong Jeong

Mid-lockdown has been the perfect time to pick up a book with minimum distraction.

The first choice for this once-avid reader who has found themselves overflowing with time to read again, was a book I purchased over a year ago in Waterstones – ‘The Good Son’ by You-Jeong Jeong.

‘The Good Son’ is the first English translation of work by South Korea’s leading writer of psychological crime and thriller fiction, who often gains herself comparisons to Stephen King. This particular book has the review ‘A cool, crafty did-he-do-it thriller…The Good Son will rivet readers of Jo Nesbo and Patricia Highsmith’ on the cover, though the comparison to Jo Nesbo only really stretches to them both being brilliant writers of psychological crime stories in languages other than English.

Who can you trust if you can’t trust yourself?
Early one morning, twenty-six-year-old Yu-jin wakes up to a strange metallic smell, and a phone call from his brother asking if everything’s all right at home – he missed a call from their mother in the middle of the night. Yu-jin soon discovers her murdered body, lying in a pool of blood at the bottom of the stairs of their stylish Seoul duplex. He can’t remember much about the night before; having suffered from seizures for most of his life, Yu-jin often has trouble with his memory. All he has is a faint impression of his mother calling his name. But was she calling for help? Or begging for her life?

Thus begins Yu-jin’s frantic three-day search to uncover what happened that night, and to finally learn the truth about himself and his family. A shocking and addictive psychological thriller, The Good Son explores the mysteries of mind and memory, and the twisted relationship between a mother and son, with incredible urgency. 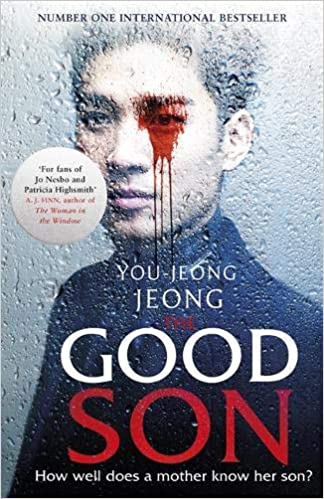 The premise is familiar – a murder, memory loss, and the journey for answers. Answers to the first murder arrive relatively quickly, and you may be tricked into thinking the book is somewhat predictable – but answering the first question only asks a whole lot more.

‘The Good Son’ uses the revelations of the first murder to stray from the familiar and in favour of twisting and turning through the unravelling of Yu-jin’s reality.

The book is as much about the psychology of family as it is crime. The relationship between Yu-Jin and his mother, aiming to understand the reasons a mother’s love leads to inexplicable actions, and how deep a family’s secrets really can go will keep you turning the pages looking for more answers.

Among the answers is more murder, written with such a clinical attitude that the character will give you chills, it is no wonder Jeong is such an acclaimed writer of crime thrillers.

Both gory murders and psychological revelations are paced impeccably to form a fantastic slow-burn thriller, with the final piece arriving in the final words of the book. ‘The Good Son’ keeps you hooked from opening to ending, makes you feel both ahead of the game and completely in the dark, and will definitely keep you entertained.

If you’re looking for other reading recommendations, check out our 11 Korean Books to Read While in Isolation picks.