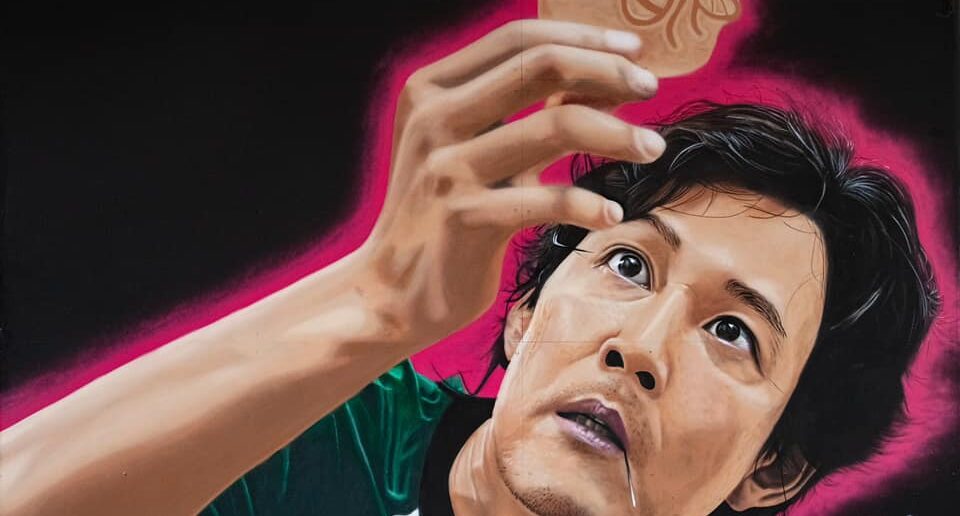 Putting his own twist on the show, Akse has pictured Gi-hun playing the Dalgona Candy game, only this time Gi-hun has an even harder shape – A Manchester bee!

Of his piece Akse wrote:

Gi-hun picked the wrong shape for the Dalgona candy Challenge! 😂  I haven’t painted a proper fan art piece for a while. I’ve always wanted to pay homage to Korean cinema and had a portrait of one of my favourite actor , Song Kang-ho, in mind for years but never got to do it; so after binging on Squid Game 🦑  last week I thought that was the time to finally do something about it!

He also detailed his love of Korean Cinema and offered some watch suggestions.

The type of Korean movies I enjoy are usually crime or horror movies which often explore themes of social inequality. I got into Korean movies after watching Bong Joon-ho’s Memories of Murder back in 2003, I was just blown away by the cinematography, the dark humour and the eccentric characters; Other favourites from Bong Joon-ho include The Host, Mother and Cannes’ Palme D’Or Winner 2019 Parasite; Some other directors I discovered include Park Chan-wook who’s behind Joint Security Area, Sympathy for Mr Vengeance/Old Boy/Lady Vengeance, Thirst and The Handmaiden, and Kim Jee-Woon who directed A Tale of Two Sisters, A Bittersweet Life, The Good The Bad The Weird and I saw The Devil. So if you enjoyed Squid Game, have a go at some of the movies I’ve just mentioned, you won’t be disappointed! Big thanks to @sweet.mandarin for the support with this project

Akse has hit the news a couple of times recently, he is the artist behind both the Marcus Rashford and Divina de Campo portraits that were vandalised with racist and homophobic hate respectively. (Marcus is located in Withington Manchester, Divina on Richmond Street behind G-A-Y in Manchester’s Gay Village.)