How many times have you heard or seen a Korean Drama/film have a Western adaptation, from the most premier example of Oldboy a 2013 American “reinterpretation” as described by Spike Lee, based on the hit Park Chan-Wook film released in 2003. To the rumours of an adaptation of the popular Netflix series Squid Game, directors are often criticized for the decision to remake classics in fear of losing the original and often cultural meaning behind the director’s intentions.

However, today’s piece is the opposite. Based on the Netflix original hit series Money Heist this drama adds a unique spin on the Spanish drama incorporating classic Korean cinematography and storytelling whilst keeping in line with the show’s original plot.

Beginning with the unification of the two Koreas, the drama follows the struggle of North Koreans struggling to find an equal quality of life to their South Korean counterparts due to their lack of education and prejudice from South Koreans. The series paints a potential picture of what life would be like under a unified Korea.

The show follows the same names as the original Spanish version with each robber having the name of a Capital city, and the main mastermind being the professor played by Jitae Yoo. Who recruits each member based on skill with each robber having a different role for the mission to be successful, the show focuses on giving the robbers backstories and how they got to the point of meeting the professor.

The most noticeable of these is Berlin, played by Haesoo Park, a North Korean whose backstory focuses on the death of his mother who was shot whilst they attempted to cross the border into the South. Placed in a deportation camp, Berlin would be subject to numerous beatings by guards and inmates alongside hard forced labour, ultimately contributing to his psychopathology. This is clearest later in the show as he would attempt to place his own rules going against the professor’s orders. 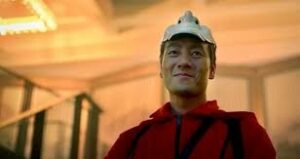 The second of these backstories is that of fellow North Korean immigrant Tokyo, played by Jong-Seo Jeon, who was scammed into moving to the South after being promised accommodation, and forced to work as a hostess where she would murder her boss in an act of self-defence and begin her career of crime as she would steal from gangsters exploiting North Koreans as an act of revenge. This would lead to her being recruited after being on the run and the story focused on her for the first few episodes as we are introduced to the other cast members. 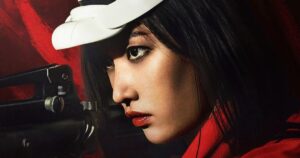 Huge emphasis on the tension between both North and South, and the drama focuses a lot on the public opinion with neither side wanting to be blamed for the failure, there is also a focus on wanting to be the side to solve the issue at the mint both countries employ their best police forces with the South captained by negotiator Seon Woo-Jin played by Kim Yun-jin and the North by militant Captain Cha Moo-Hyuk played by Kim Sung-oh. Both sides take different approaches to the situation in the mint, tensions get higher as the North finds out details of Seon Woo-Jin and takes actions into their own hands.

Overall, this drama has everything and if you enjoyed the original version of Money Heist or are a fan of dramas such as Squid Game then this is the drama for you. Its view on the potential possibility of the future of a united Korea is interesting its references to Korea’s political history and current social class issues such as the importance of education and good family background further embrace the message shown during Korean cinematography in the recent uplift and rise of Korean Media industry this drama is all worth the watch.

For more information about ‘Money Heist: Korea – Joint Economic Area’ why not check out the official trailer here: