“Without proverbs, the language would be but skeleton without a flesh, a body without soul.”

It has been said that to understand a people, you must know their proverbs. There’s a lot of merit to this argument, especially since proverbs tend represent a common set of values, beliefs and ideals for a culture.

Each week, UnitedKpop brings you three Korean proverbs that you can use in everyday life (and sound like a complete boss). This is for all you wanting to know more about the language than the “Annyeong” and “Saranghae”, wanting to get deeper into the psyche of the typical Korean. And in honour of the medieval Sungkyunkwan educational institute (of Sungkyunkwan Scandal international fame), we call this column “Taehak Proverbs“.

Literal: “Even the straw shoe has a mate.”
Meaning: “There’s someone out there for everyone.”

I suppose this is explains itself, really. Even for something as lowly as shoes made of straw that peasants wore, there is always a matching shoe that can make a pair. There’s someone out there for everyone. 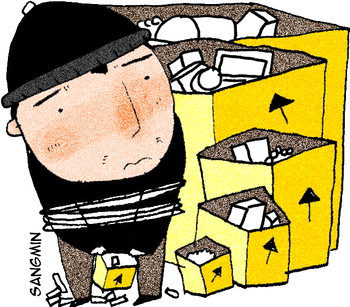 Like in many cultures, livestock were a sign of wealth. For many families, the cow was perhaps the single most valuable thing that they owned; able to work the land, carry impossibly heavily loads, provide manure, and in death provide invaluable and rare meat for a largely crop-growing agrarian economy. And only a few households could afford these animals because they were so valuable.

The proverb is saying that someone who begins to steal small, common things like needles and becomes used to small crimes, will eventually get to the point where they will not think twice about stealing things of extreme value, like the cow.

This proverb is also applicable with any immoral act or crimes. Someone who tells a few small lies without feeling guilt will eventually end up telling bigger and bigger lies. It’s used often as a warning by elders to youngsters, about not getting involved in bad things; often you never know when to stop until it’s far, far too late. The short form of this is 바늘도둑 소도둑 (Baneul doduk, soh doduk).

Literal: “Someone else’s rice cake always looks bigger.”
Meaning: “You always think someone else is better off than you.”

PSY actually paraphrased this proverb in the lyrics of ‘Right Now‘, the title track of his fifth album ‘PSY FIVE‘. I think the proverb is in many cultures. The most common English version of this is “The grass is always greener on the other side.”

However, “the grass is greener” is only one application of this proverb. It is generally used when one person covets the possessions or situation of another person. It’s noting that our perspectives are skewed to devalue the things that we already have, even if they are the same as, or maybe even better, than the things we don’t yet already have. It is supposed to help us learn to understand the value of what we already have.

Thoughts on this weeks proverbs?
Any topics you want covered in the next edition?
Leave your thoughts and suggestions in the comments below!