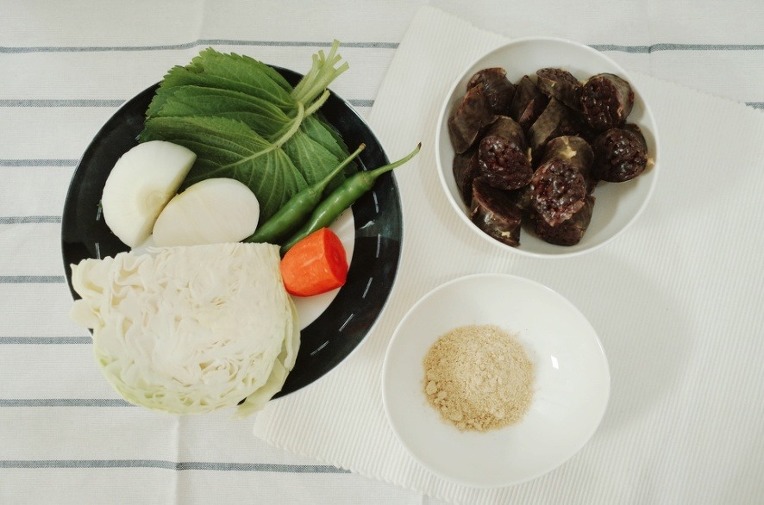 Okay, so I know what you’re thinking; Sundae? Isn’t that like a pot of ice cream with brownies in it? Well, in Korea, it’s a type of sausage. It’s typically made by steaming cow or pig intestines and filling them with a variety of ingredients; the main one being blood.

While when it was first created in the 900s it was a luxury food, consumed during special occasions, the Korean War transformed this dish into the cheap and accessible street-food that we know today. At the time, the expensive meat was completely replaced by dangmyeon, which is a type of konjac noodle. There’s so many types of sundae (pronounced soon-day) sausage, and they can vary greatly depending on the region; there are Chinese and North Korean varieties which feature traditional rice-vegetable-meat fillings, whereas areas such as Gangwon province, which is next to the yellow sea more frequently use fish as a primary ingredient. The sundae can bee eaten alone, or placed in other dishes such as sundae-guk, which is a soup.

It is interesting how the sausage’s image as a cheap food has also led to it having connections with areas famous for previously having many criminals in Seoul. The area of Siillim in the 1960s and 1970s was well known for being the centre of lots of criminal activity in the South Korean capital. However, these days, it holds the Sillim-Dong Sundae Town. It is a must-go place for foodies on the hunt for Sundae; you can often spot businessmen and couples looking for a delicious and filling meal. There is a sense of gentrification from previous hardship and poverty, but also within that, the idea that holding onto culture and actions from the past is key in maintaining identity and continuation. South Korea is a country that is continuously changing, but, those foods that brought comfort in earlier years is still there for Koreans to enjoy and for foreign visitors to discover.

Not full yet? Check out this video on Sundae by The Korean Herald below: