Trending
You are at:Home»Original Content»Guest Article»[GUEST ARTICLE] 4 Ways to Find and Make Friends That Are Into K-Pop [Tried and tested}

No matter how long you’ve listened to K-Pop, be it 6 months or 6 years, finding people that share that interest can be difficult. As much as K-Pop, and its fans, have been in the news for the astonishing and commendable feats they can accomplish, there can still be some stigma around liking it. Which makes expressing your interest in it, even harder. However, having at least one other person around you that you can reach out to when your favourite group’s new music video is released or, when your bias’s teaser photo drops, makes it all worth it.

So here are my top 4 ways to find your own K-Pop community that I know work because I’ve used them, to great success…

You’ve got the world at your fingertips! Yes, social media can be a bit daunting, especially with so many options but, start with a quick search on Twitter or Instagram and you’ll soon be on your way to making friends.

If you’re trying to stay undercover (we’ve all tried hiding our obsessions from work and school mates) create a fresh account and start from there. Follow the official accounts of groups, fansites, fancams and specific fandoms. Hashtags will be your best friends and remember to reply and like content that you, well… like. Sooner or later, you will start getting people following you back and then you can hit them with a dm, and it’s plain sailing from there.

However, if you are a bit socially anxious and don’t think you would be able to start up a conversation with a complete stranger, don’t worry. Check out the next method.

Amino Apps makes finding people with common interests so much easier. It is like every form of mainstream social media rolled into one and tailored to your interests.

Want to find more fans of BTS? Join the Army community. Is there an indie artist that you want to share your love for? Make a post in the K-Pop community and look at your replies. Want to show your support for a newly debuted group but no one seems to know them? You can even make your own community and invite people to join.

People that you thought were strangers turn into friends and friends turn into best friends and then, before you know it, you will think back and wonder how would you have managed without these wonderful people in your life.

Unfortunately, this is only aimed at a specific group of people. If you are thinking of going to university or, you are already there, then this one is for you.

Universities often have societies or clubs that are a part of their student’s union. Joining them can make your uni experience exponentially better. They are made so that people with common interests can find each other and become friends. If you thought being too nervous to talk to new people was the issue, forget it, because at university no one knows anyone at first so, you are all in the same boat. Also, societies actively want new people to join so they are going to be as welcoming as possible.

Check your SU website and enquire to see if there is a K-Pop society at your campus. The amount of Societies in the UK is growing every year so there is a good chance you’ll find one.

This could be important to note: If you are not a university student and don’t plan on becoming one, there is still a chance that you could join a local university’s society. Some Student Union’s allow non-uni students to join societies with a small fee, due to insurance. Check the website and if in doubt, send them an email.

If the idea of talking to strangers on the internet isn’t for you or, you are not interested in university then don’t worry. I still have one more trick up my sleeve.

Arguably the hardest method, trying to coax friends into liking your favourites, tends to have a high fail rate but, I have the tips and tricks to turn the odds in your favour.

DO NOT bombard them with content hoping that they will give in and finally watch something. I know you think it’s working but trust me when I say, they are only watching SEVENTEEN’s comeback with you so you will stop talking about their level of synchronisation being insanely satisfying, for 5 minutes.

The real way is to be as low-key about it as possible. Pick a song or a couple of songs by one artist and play it in the background whenever you hangout. Keep the volume low enough to not draw too much attention but, high enough to still be audible. If they ask what song is playing, tell them the title but shrug it off as just some something you found the other day and then immediately change the subject.

Then, you can slowly introduce more and more songs. They will soon be coming to you to ask what song is stuck in their heads and that’s when you reveal all because, by that point it will be too late. They will be just as obsessed as you.

Tailor songs you recommend to your friends to their individual tastes. For example, if they already listen to indie chill music, play some BOL4 and see what they think.

Collaborations with western artists are the ultimate UNO Reverse card. Did you think you were listening to K-Pop? Wrong, this is a Lady Gaga song.

The most important thing to remember is you are not alone. There is someone out there that likes the same groups as you, even if they are super niche. Stay safe online and make some friends. 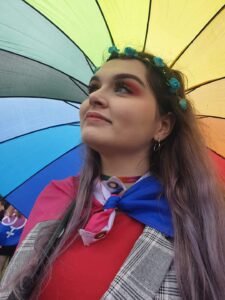 Jenna Moon was born in County Durham England, she has been a kpop fan since 2016. Her favourite groups being GOT7 and LOONA. Jenna was, for a period of time, an Admin for a Kpop Amino, and also most recently the President of the K-Wave Society at the University of Lincoln. She has taken part in national university Kpop competitions, as well as featured in a BBC Radio Lincolnshire special on Kpop, where she talked as the societies president on the popularity of Kpop and what the genre is.