With comebacks returning to a more regular page we are faced with a run of pre-release material for TST*, otherwise known as Teaser [TS] Tuesday, once more.

One group that began their teaser trail for their new mini album at the beginning of this week was VIXX, and with concepts such as hyde and Voodoo Doll to follow up expectations are high.

VIXX will be returning with an album called Eternity, from which they will release a title track of the same name, though the Korean name for the track Eternity ( 기적 ) is translated as Miracle.

Eternity means timelessness; infinite or unending time. It can also be used to refer to endless life after death or even as a euphemism for death. Eternity is undefinable as its duration encompasses both the past and the present.
The idea of eternity is important to theology and religion and the immortality of God or gods is explained as eternally enduring.
An interesting nugget of information about the word Eternity is that in Japanese it translates to eien ( 永遠 ), it is this very word that leader of VIXX Cha Hakyeon created his stage name, N. VIXX and Jellyfish gave realvixx a facelift and presented us with the main visual that would lead Eternity’s TS trail. The clock.

A clock alone could symbolise many things, from the obvious such as time and cycles, to more complex idea such as mortality and fate.
It is only when we begin to look at the progression of the clock symbol and the additional information we are given that we can draw more from this main feature.

Accompanying the clock is an adapted version of the VIXX logo, a lightning bolt running through the final X. As the countdown to release began this lightning bolt would become instantly important as the initially complete clock was broken down upon being struck by lightning.

So what does lightning symbolise? Essentially, and unsurprisingly, lightning is a sign of power and speed. Clocks as we mentioned can represent time and cycles, and deeper ideas such as mortality and fate. Looking at a clock simply it is a circle, a circle has no sharp edge or corners, the edge continues on and on, it can be a symbol of infinity and eternity.
When exploded we see more than just the original face of the clock. Behind are three more dials, with differing sets of symbols. There is a second set of Roman Numerals, a series of Zodiac symbols and what also appears to be characters from the Greek Alphabet.

If you watch the clock on realvixx.com you will see the hands turn in reverse, reminiscent of the teaser for G.R.8.U in which the members all move in reverse. Is the clock counting back to something? Or is it simply a reminder that eternity doesn’t just mean a timeless passage in a forward motion?

Is this idea of immortality of gods enduring eternally important here? I’d say so. On a base level we can relate this immortal endurance to the idolisation of celebrity, and how fame can endure long after a career has ended. Though if we combine the idea with other elements we can look into the concept further.

There is a long list of gods with a control over lightning, or who are symbolised by lightning. Zeus, the father of Gods and Men, his symbol is the thunderbolt, and he even gave the gift of immortality to Ganymede.
Others include the popular icon Thor; Aztec god Tlaloc; Mayan God K, the Slavic Perun, Finnish Ukki, Hindu Idra, and Shinto God Raijin.

Put these elements together and what do we have? Infinte power and a god-like status that spans past, present and future. This eternally encompassing power is not appearing for the first time. We’ve seen this throughout VIXX’s entire concept development. We’ve seen representations of the past via themes from Robert Louis Stevenson’s The Strange Case of Dr. Jekyll and Mr. Hyde in the hyde mv, the present via video game themes in Rock Ur Body, and future themes in On and On.

If we are looking at theories of immortality and gods, symbols of Roman, Greek, and Astrological prominance would be very fitting. The ancient civilisations of Rome and Greece shared many deities, and also contributed greatly to the advancements in sciences, mathematics, astronomy and astrology.

Through philosophy and mathematics alike the Greeks especially contributed many theories we still use today to calculate and solve mathematical problems.
Thales’ Theorem uses circles and straight lines to create and determine angles. The symbols uses for the members’ teaser photos could be thought of as reminiscent of shape theorems, though essentially all of them come from the circle, the symbol of eternity.

The last element of the teasers thus far is the member photos. Wearing elaborately designed, two colour outfits one might be reminded of the stitched together, patchwork styling of Voodoo Doll.
Though Eternity is much more luxurious. Purple is a colour that implies royalty and strength. It is also a colour strongly associated with faith, linking well with the idea of the enduring presence of an idolised god. In some cultures, particularly those in Asia, purple is associated with the balance and harmony of the universe as it is made up of red and blue, the two sides of Yin and Yang. 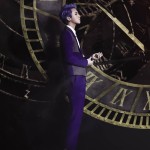 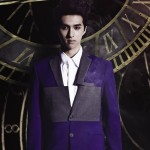 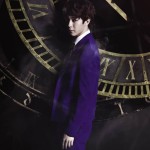 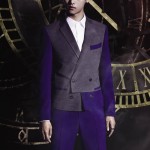 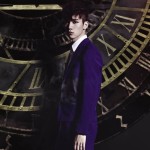 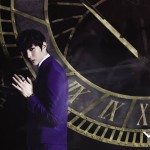 With every day in the countdown to release the clock looks set to change, with midnight in Korea marking D-6 and the VIXX members emerging from a stairway from the clock. What do you think VIXX might bring with Eternity? They left us with two written clues about their concept:

What do you think these mean?

* The shortened version of the name, TST, comes from a scientific theory known as Transition State Theory. This theory is used to understand how chemical reactions take place, and explains the rates of these reactions.
In terms of our subject of teaser trails in Kpop, these theories are very apt. TS trails are created to cause a reaction and we will be looking to explain what the teaser media tells us, what it is that causes these reactions. Hence our TST molecular logo.