Returning to another Fun Story OTW we have Super Junior’s Siwon and Jackie Chan together, however the pair of friends have been brought together for Jackie Chan’s film Dragon Blade!

‘Dragon Blade’ is said to be one of the biggest upcoming films in China starring Jackie Chan, faces off with American actor John Cusack starring as soldiers whilst Adrien Brody plays General Tiberius.  in the forthcoming Chinese epic. Costing over $65 million to produce, it shows off a one of the largest budgets for a Chinese film.

One of the leading actors of the film is none other than Super Junior’s Siwon who seems to be very busy acting lately, having two more films lined up for release in 2015: ‘Helios’ and ‘To the Fore’, ‘Dragon Blade’ is the first of his films to reach theaters this year.

The press conferences and promotional tour for the movie took place in Shanghai on the 6th February, Singapore on the 10th February, Malaysia on the 11th and on the 12th February it is being held in Taiwan, where the conference was not ones most would expect. The events were filled with laughter with all actors sharing funny anecdotes of what it was like working with each other. Many of the actors shared particularly the struggle with the language barriers they coped with since the cast is filled with Chinese, American and Korean actors amongst each other. Siwon plays Yinpo in the film; a talented Chinese General in the film supporting Jackie Chan’s character Huo An. He enlightened a media news outlet with stories of working with the Hollywood actors and Chinese actresses in the movie as well as answering an amusing questions of his rather large beard he sported in the film as well as if he saw his fellow Super Junior members or his pet French bulldog; Bugsy. Being fluent in English, it is apparent he has  helped the American actors in translating much of the things said during filming and promotions. Siwon here as a result was able to give the interview fully in English.

Check out the video by clicking the link here. Siwon wasn’t the only actor with an amusing interview. Check out this clip of John Cusack and Adrien Brody attempting to speak a little Mandarin!

Check out some of the photos from the events! 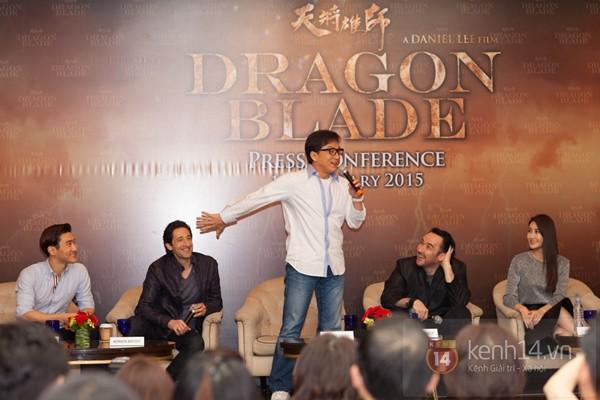 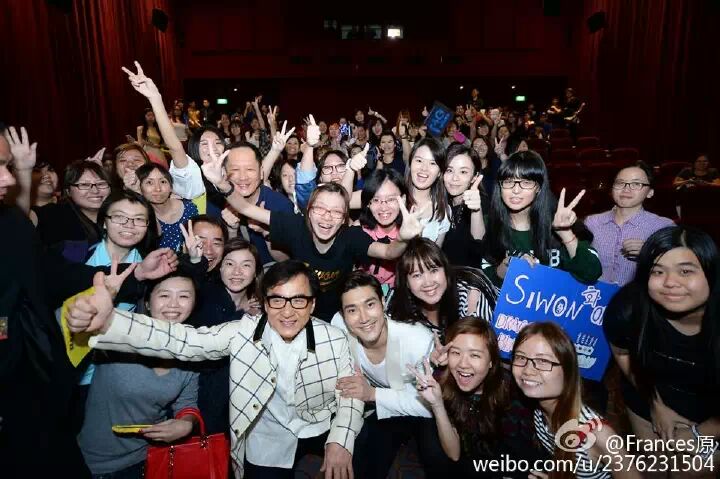 John Cusack shared his new friendship with the Super Junior member at the Shanghai conference saying: 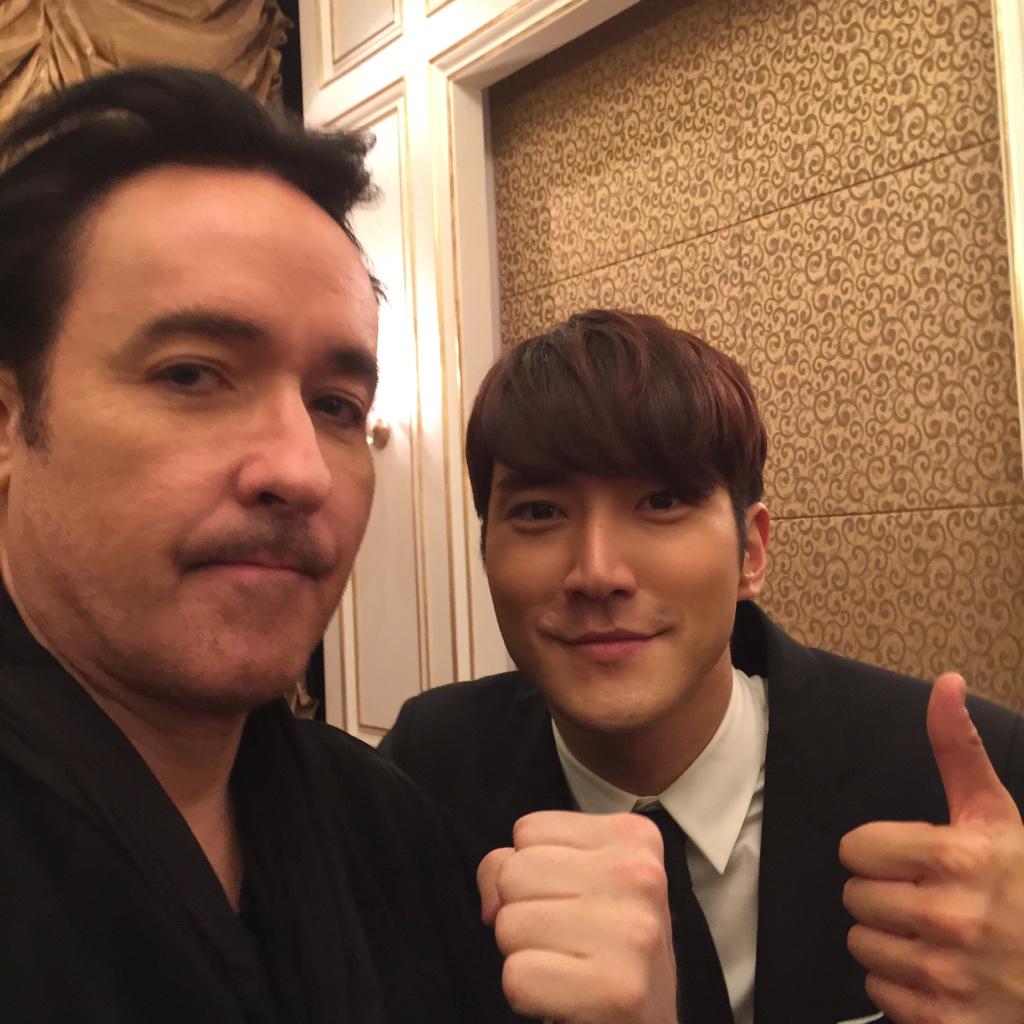 ‘With my new friend from dragon blade @siwon407‘

As well as later tweeting ‘In Shanghai with dragon blade cast member @siwon407 see u at the next stop brother!’ with the following picture: 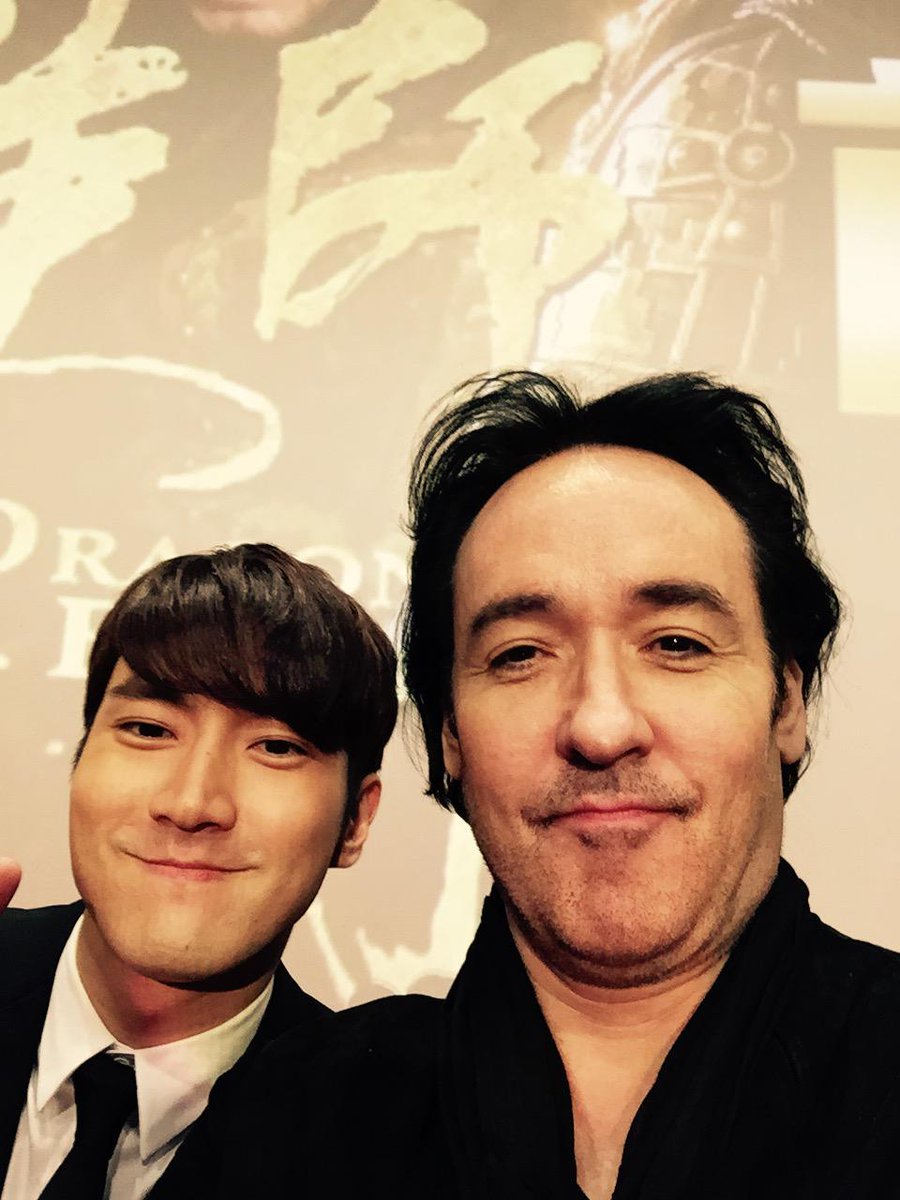 With Siwon also commenting on his friendship saying: 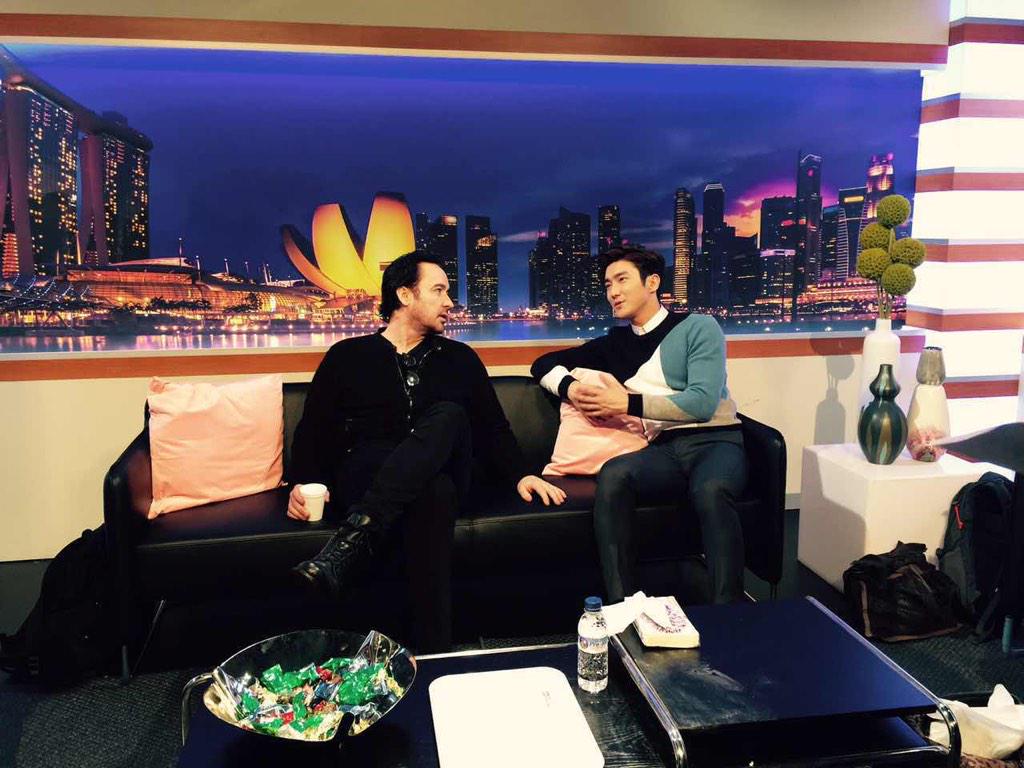 ‘guys talk that night. now I have big brother from Chicago @johncusack‘

Siwon also shared his excitement for the ‘Dragon Blade’ promotions, appealing to his fans on Instagram to support him in the events in Singapore, Malaysia and Shanghai.

Siwon shared his initial excitement for the tour commenting on his Weibo account while in Shanghai, ‘Well complete!First day attending Dragon Blade promo, Thank You,I love you,see you at SS6 tmr’ with the picture:

The singer is known for teasing fans when abroad posting the following picture with the comment ‘Are you ready Singapore?’ Siwon also commented later with a picture of himself missing his fellow Super Junior members with his cast members at Singapore’s ‘The 5 Show’ saying ‘Thank you “The 5 Show”. it was really fun. See you next time maybe with All my members’:

Check out this funny English interview from the cast from ‘The 5 Show’ with Siwon talking about Singlish (Singapore & English language combined), guyliner and the funny reactions of the cast members (featuring some rather  amusingly expressive faces from Siwon!)

At his stop in Singapore he also teased fans to come to see him at his mall event to which he later posted a video of the event commenting ‘We are really impressed by your passion and “LOVE” thank you so much Singapore :^)’ with the photo: And showing his love for the many Malaysian fans who came to support him by saying ‘Thank you for being my mates Malaysia. It was really fantastic. Next station is Taipei. I can’t wait see you all. good night ✌️’ with the following picture: As well as later in Taiwan, thanking this Taiwanese fans for their support of his movie posting ‘Thank you Taiwan for all your support and incredible “LOVE” see you tomorrow “THAILAND”‘ 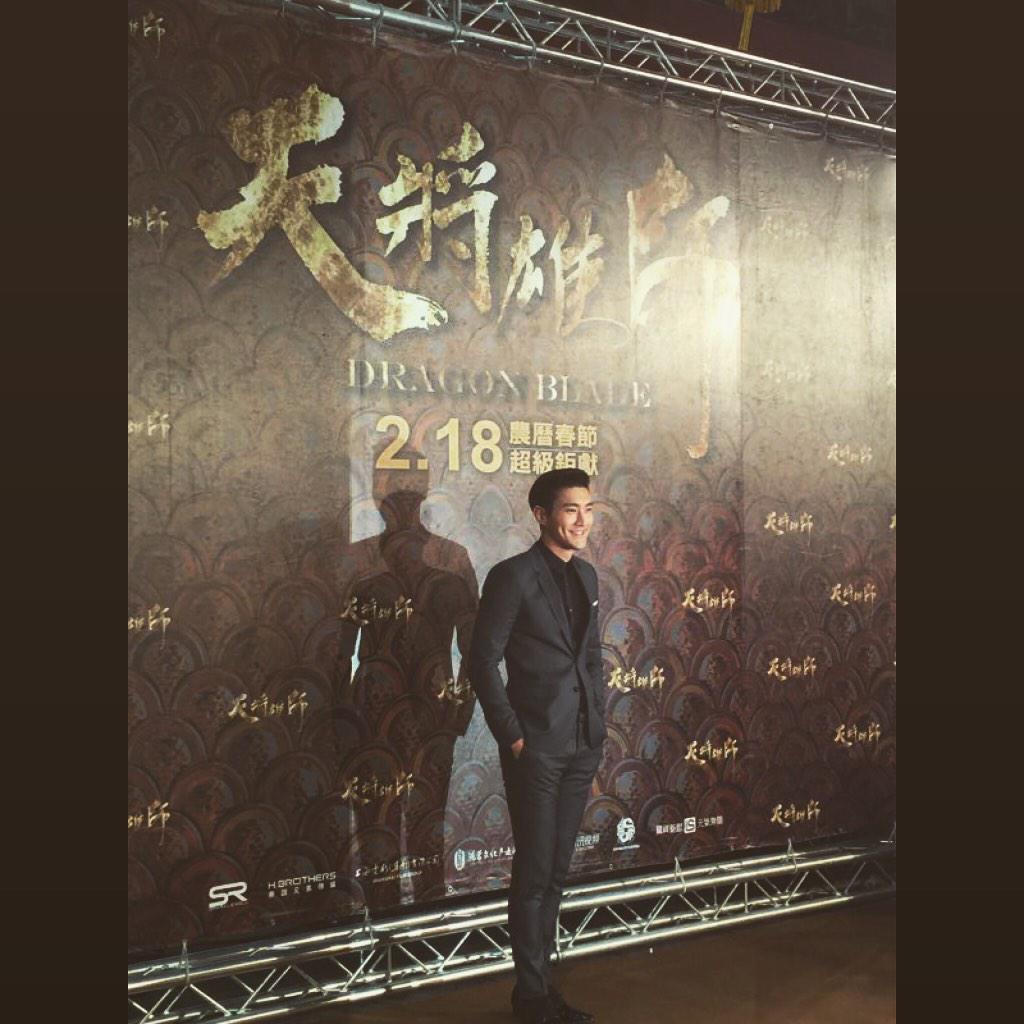 As well as sharing a sweet photo with Jackie Chan saying ‘Thanks again :^) :-*’ 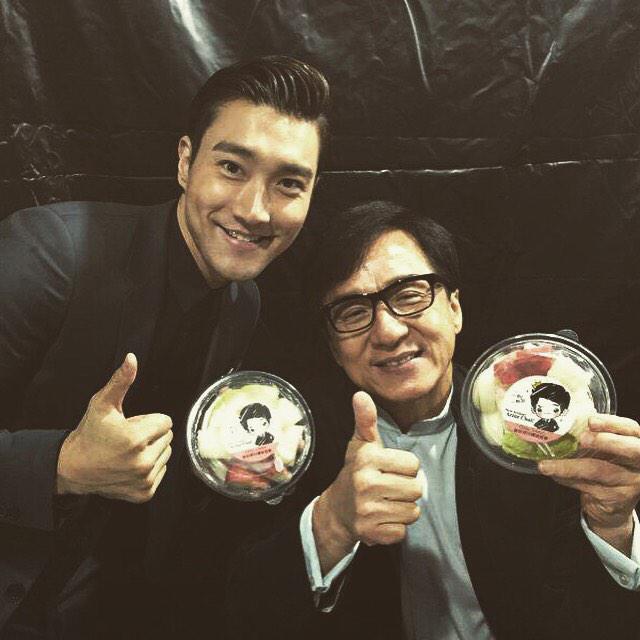 Siwon is currently in the middle of preparing and rehearsing for numerous concerts amongst his fellow members for Super Junior’s world tour Super Show 6, having just finished a concert in Shanghai are now heading to Macau in March for their next concert.

Check out the trailer for Dragon Blade here which hits cinemas in China and IMAX theaters on February 19th!

What do you think of the movie?

Will you be seeing the film?

Let us know in the comments below!

Until next time for another Fun Story~