If you’ve missed the buzz around ‘Parasite,’ it’s safe to say you might have been on a different planet for the past few months! The film, directed by Bong Joon Ho, has gathered a near astronomical amount of critical acclaim and has astounded people with its complex themes and masterful storytelling.

So comparatively, the most iconic meal seen in the film is very simple. Ram-don, as it’s termed in the English translation of the film, is actually Jjapaguri – a mixture of instant noodle brands Neoguri and Jjapaghetti. Neoguri is a spicy seafood flavoured noodle, whilst Jjapaghetti is its own version of Jajangmyeon, or black bean noodles. The two combined create a different flavour all together whilst cooling down some of that spice. But the ‘Parasite’ version doesn’t stop there. Top-quality steak is fried off and mixed in, giving a meatier taste and a hint of luxury. Of course, this was what it was meant to convey in the film. The wealthy Park’s asking their housekeeper to use expensive steak when cooking an otherwise cheap and simple dish shows their constant desire for indulgence and takes what would otherwise be a meal for those who cannot afford much and turns into something beyond their means. 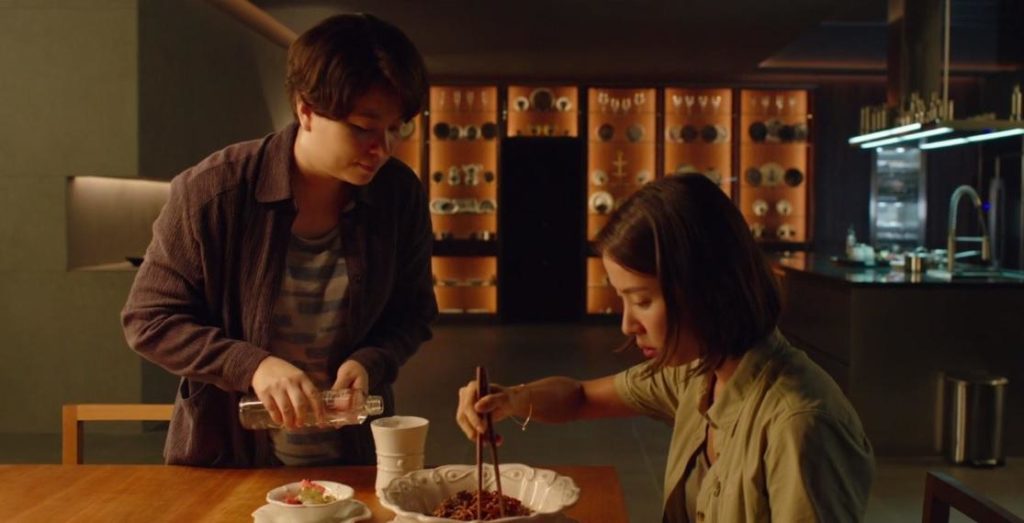 However, it doesn’t have to be something just for the select few. Given how easy it is to make, it’s accessible to almost anyone, and you can change the cut of beef according to your taste and price point. Rib-eye or sirloin will work well, but you could even switch these out for something like pork if you fancy it.

And when we say it’s simple, it really is. All you need to do is put both packets of noodles into boiling water until they’ve become soft enough to separate. Whilst the noodles are boiling away, cut up the beef and saute in a small amount of butter into nicely cooked. Put this to the side when done. Then drain the noodles a little, keeping back some of the water. This way, when the seasoning packets are added, they will form a nice coating sauce – not enough to become soup noodles, just enough to cover. Mix in the beef, and that’s all there is to it.

Of course, we could show you better than we could tell you. Or rather, Maangchi could. Check out her easy to follow and try not to salivate as you watch! Sometimes it’s the least complicated meals that end up tasting the best!